Take Me, Read Me, and Return Me. Hollie and Rosy talk about Books on the Subway 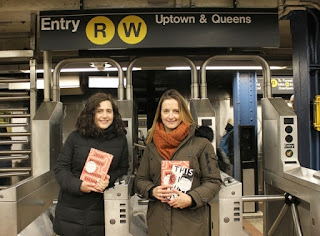 So there you are on the New York City subway, cranky because the E train is late as usual, or because the Number 6 is crowded and two guys are man-spreading, and a woman is eating a slice of pizza right beside you and you are all in white. And then you see it. A book like an invitation. Maybe it's tucked into one of the benches. Maybe it's on a trash can. And you pick it up and read it and then pass it on. That's Books on the Subway, the brain child of Hollie and Rosy. And they are spreading literature all over New York City. I had to interview them. Thank you, thank you Hollie and Rosy!

To learn more about this movement, visit the website Books On The Subway, or connect with Hollie and Rosy on their social sites at Twitter @bookssubway and Insta: @booksonthesubway.

And think about spreading this to YOUR community.

So how did Books on the Subway come about? And how do people know that it is okay to pick up a book and take it?

Hollie Started Books on the Underground back in London in 2012. Rosy saw a tweet from Leo Burnett, London about the project. She reached out to Hollie about the project and asked if she could start it in New York. Books on the Subway has been running in NYC since 2013 and now 4 years later, Hollie moved out to NYC and they run the project together. We leave about 20-100 books per day on the subway. The books have a sticker that say 'Take me, Read me and Return Me', so it's really clear what book finders have to do.

What has the reaction been?

The reaction has been overwhelmingly positive. Everyone is over the moon when they find and book. And these small acts of kindness make people remember why they love living in NYC.

Are there certain kinds of books that do better on the subway than others, and if so why?

Books that tie in to NYC seem to do really well, people just love to feel connected to the city they live in. And some of the romanticized stories of New York city life are fun to read when you're actually living in the city itself. Other titles that tie into a cause or a certain holiday do really well, whether it's a story about MS on MS awareness week or an anti-bullying book that spreads a good message. It's always nice to do a book that has real relevance.

What's been your biggest surprise about this program? And how can people help spread the word, or start a similar thing in their own city? And how do you track how many people have taken a specific book to read?

I think our biggest surprise is how many people want to get involved, and just how many people want to do it in their own city. People can just spread the word by sharing on social and telling their friends. Getting people to actively search for the books on their daily commute is our aim. We don't track the books, it's an organic project. We see people tweeting or instagramming the books they pick up, but that's not a guarantee. But we do know that when we leave a book on a bench it's normally gone within about 2-3 mins after being put down.

We're obviously obsessed with growing and spreading the project, to get books to as many people as possible. Getting more awareness is key, it means that more people are looking out for our books on the subway and getting excited and reading more! But on top of that, we're obsessing over how we can make it more than just 'Books on the Subway', we're trying to figure out what else we want to stand for, and how can we do more for the literary world!

Why! Why do we do this? That's what people always ask. And we do it because of 2 things. We both love reading and we both love NYC. And if we can get people to fall back in love with reading and their city, then we'll be happy!
Posted by Caroline at 11:28 AM