Kurt Baumeister talks about his jazzy new political thriller Pax Americana, spirituality, God, gods, writing and so much more. Plus, read an excerpt! 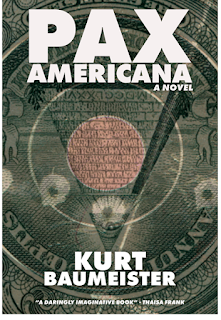 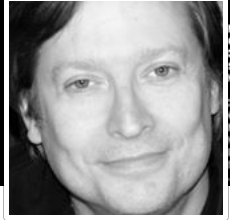 I'm always thrilled when someone I know writes a novel that knocks my socks off--and Kurt Baumeister's knocked my shoes off, too. It's a political thriller and trust me, it's that good.

Kurt Baumeister’s writing has appeared in Salon, Electric Literature, The Nervous Breakdown, The Rumpus, and The Good Men Project. His debut novel PAX AMERICANA will be published in 2017 by Stalking Horse Press. A graduate of Emerson’s MFA program, Kurt lives in Virginia. Find him at www.kurtbaumeister.com. Thanks so much Kurt for being here.

Religion, philosophy, spirituality, God, gods, the concept of the metaphysical—those are some of the things that animated my thinking about PAX AMERICANA. Over time, I’ve come to see these sorts of issues as simultaneously significant and absurd. Which probably explains why this book is satirical. I don’t see the metaphysical world as non-existent necessarily—though I am a skeptic—but to the extent that world does exist, I see it largely as unknowable. As far as religion itself goes, my feeling is you should go with whatever gets you through the night.  If believing in a God (or Goddess or gods or goddesses) makes your life easier, that’s a good thing. As long as your belief doesn’t impose itself on the reality of others. Which, I think, is where the trouble usually starts. That’s the line we walk in America. How do you allow people to believe what they want without burdening others as a result of those beliefs? I think America’s founders were mostly inclined to favor religion, to see it as a good (even necessary) thing in and of itself. I also think they would have very different opinions today, knowing all we know. That’s not to say that a constitution written today would not have freedom of religion as a guaranteed right, but the ability to proselytize, to control the public square with your religion, the tax exemptions for simply being churches (rather than doing material good) would probably be curtailed. Other book-related hauntings: America, the corporate state, fast food, theocracies, advertising, the conservative bubble, nuclear war, New Orleans, Ian Fleming’s James Bond, animals, sports cars, silly names for products, people, and just about everything else. Man, Caroline, I am haunted by a lot.

Writing a novel is like trying to get your way out of jungle with only a dull-edged butter knife instead of a machete. But there are surprises along the way. What were yours? And what kind of writer are you?

Well, based on this example, I’d say I’m clearly the sort of writer who’d bring a butter knife to a machete fight. And I did. My god, did this book take me a long time. I wrote PAX AMERICANA as a more experimental novel first (though, it wasn’t called PAX AMERICANA then). By the time I was done with that draft, I had 130K words, 111 chapters, and seven narrators. So, basically, a pretentious mess. I cut the manuscript without much mercy, got it down to the 50K range then built it back up into something I hoped would be a bit more commercial but still retain some of the spoofy, satirical, metafictional feel I wanted.  I suppose the most surprising thing about the book is how much of a transformation Diana Scorsi underwent from the first version to the final. Besides having a different name and a much more elaborate back story in earlier drafts, she was one of the book’s villains. Though, in my (fictional) world I try to muck around with concepts of heroism and villainy. And regardless of where I personally come down on each character, I try to give them enough autonomy to see themselves as the hero of their own story, even if they might not be the hero of mine.

Your political thriller is so innovative, so fresh, that I’d love it if you’d talk about what is wrong with the traditional thriller (and what might be right.) And did you ever feel like you were breaking rules (and did you take great glee in that)?

Thank you so much for saying that. Words like ‘innovative’ do my dark little heart good. I have a difficult time categorizing this book: lurching from literary fiction to slipstream, spy novel to satire, thriller to science fiction when I do try. I guess the best thing to say is that it’s a combination of all these; though that doesn’t make for a very concise pitch. To the extent this is a political thriller, I see it as a sort of anti-thriller. It’s not that I dislike the genre. I grew up watching James Bond save the world, and reading about it, too. This is more an anti-thriller in that many of the genre conventions serve satirical purposes and also in that the tropes of the hero serving God and country are very much in doubt. One of my great interests is politics. I suppose on some level this is an attempt to create a real political back story for a thriller, to fully engage with the politics that are usually held at arm’s length. Even though, ultimately, the politics here are satirical, too. The things I think the thriller genre does absolutely get right are its pacing, attention to plot, story, and dialogue. I think these more “mundane” literary virtues are often completely forgotten in “literary” fiction. A lot of people can write great sentences. (By a lot of people, I mean a lot of serious, professional writers.) But, can you do that, make the machine move, and still make people feel something (even if that something is only laughter)? That’s the real trick.

What advice do you give other writers?

I love giving advice to people. When they ask for it.  But, as far as writing is concerned, I’ve come to believe the best thing we can do is accept that each person must walk their own path. This doesn’t mean you refrain from giving writing advice (and especially for teachers, this would be silly), but it does mean accepting your rules or precepts, or whatever you call them, may not work at all for someone else. For me, this particularly applies to art and craft (prose style, artistic vision, use of symbolism, etc.) as opposed to the business side of things (how to deal with submissions, agents, publishers, and booksellers, etc.). In my experience, the worst writing teachers are, unfortunately, also the most dogmatic. Like tourists lost in a foreign land, they shout the same words louder and louder in the careless certainty everyone will eventually understand. And they may, in fact, have cracked the code for themselves. Which is something to applaud. But the truly universal in the teaching of art? The inviolable, infallible truth? To me, that doesn’t exist. Except for one thing: “Does it work?” This makes for a lot of trial and error, but for me, it’s the only way to go.

What’s obsessing you now and why? T

The election, no question. It’s miraculous how every four years
we forget everything we’d learned four years before. During primary season, we spend so much time fighting over relatively small differences, making them out to be far greater than they are. Then, during the general election every candidate heads for the middle at light speed. Probably the most interesting part is how obvious things seem in retrospect and how unobvious they are as they happen. Obama didn’t beat Romney by a lot. He didn’t beat McCain by a lot. The country is fairly evenly divided. So, even though a candidate like Trump or Clinton may seem so absolutely ridiculous, so unsupportable, to those of us on the other side, it doesn’t necessarily seem that way to the small group of people in the middle, the ones who actually decide our elections. Even landslide elections (Nixon-McGovern, Reagan-Mondale, Bush-Dukakis), results that seem so certain in retrospect, really weren’t. If we accelerate the timetable for something like Watergate or Iran-Contra, those elections’ results might have been starkly different. The idea of alternate histories fascinates me and no doubt an alternate reality in which the George W. Bush Administration was a complete success (for all the most horrible reasons) is central to PAX AMERICANA.

KGB (as CL): Are there more where this came from?

KGB (as KGB): Definitely. Right now I’m working on a mythocomic crime fantasy called LOKI’S GAMBIT. You’d rightly draw the conclusion that it has something to do with Norse mythology, that the god Loki is, in fact, the narrator and protagonist, though it’s set in the modern world and there are a few twists (most important Loki’s “good,” sort of). The challenge has been to write away from AMERICAN GODS, a book I hadn’t read until long after I started working on LOKI’S GAMBIT. I do think I’m accomplishing that—writing away from Gaiman’s book—though to make that work I’ve had to move most of the story to Europe. Which makes sense since the story was always about World War II, Nazi gold, modern conservatism, and the evolution of the Norse gods. As for PAX AMERICANA, this book is indeed the beginning of a trilogy. The other volumes, for which I have plenty of material, are tentatively entitled VIRTUAL JERUSALEM and THE GODS OF HEROES AND VILLAINS. I’m also about halfway through a ​poetry collection.