Ethel Rohan talks about her extraordinary new novel THE WEIGHT OF HIM, how story can thwart the writer, and so much more 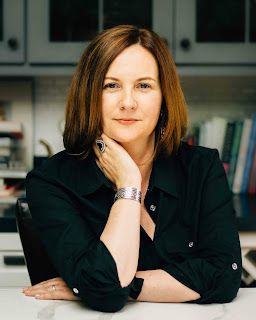 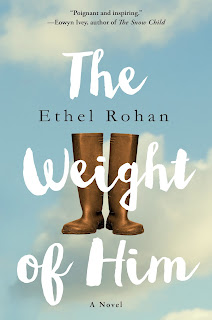 Born and raised in Dublin, Ireland, Ethel Rohan lives in San Francisco. The Weight of Him, her first novel, has already won the inaugural Plumeri Fellowship.
She is also the author of two story collections, Goodnight Nobodyand Cut Through the Bone, the former longlisted for The Edge Hill Prize and the latter longlisted for The Story Prize. She wrote, too, the award-winning chapbook Hard to Say (PANK) and the award-winning e-memoir single, Out of Dublin (Shebooks).
Winner of the 2013 Bryan MacMahon Short Story Award, and shortlisted for the CUIRT, Roberts, and Bristol Short Story Prizes, her work has appeared in The New York Times, World Literature Today, PEN America, The Washington Post, Tin House Online, The Irish Times, and BREVITY Magazine, among many others.
I'm so excited to host Ethel here. Thank you, thank you, Ethel

What's the backstory to The Weight of Him? What made you feel that you had to write this novel?
The more I’m asked this the more I realize just how far the novel’s genesis goes beyond the initial snatch of conversation I overhead in an Irish pub—talk of weight and grief, and which of the two might kill the obese mourner then sitting huddled over a glass of clear spirits, no ice, no citrus.
The deeper backstory is of course loaded and there’s likely much that’s still sub-conscious. What’s conscious is that too many people I love have died and this is a novel about surviving grief. Devastating grief, the kind where you just can’t believe, where you feel this frantic, adrenalized urge to spin the world backwards, reversing time and bringing back the departed.
It’s also a novel about mind and body shame. I’m a survivor of childhood sexual abuse and, as an adult, of suicidal anxiety and depression. Both are torturous and stigmatized, and both made me want to climb out of myself.
Third, it’s a novel that writes the marginalized into the center with care and respect. My rage is ever growing against narrow and limiting representations that devalue individuals and groups deemed ‘other’ and relegates them to the sidelines, or worse.
I felt I had to write this novel because too many are imprisoned through illness, are in prisons of their own making, or are trapped by others.
You're best known for your short stories. How daunting was it to write a novel? And how do you know when something needs to be a short story or a novel?
Actually, I find the short story more daunting than the novel. The former is a much more challenging and mysterious beast—a specialized form I love to read and write, and which I’m always trying to unlock.

I find the novel more accessible, both as a reader and writer. I better understand its range and distance, its possibilities and limits. I’m also a character-driven writer, so I revel in getting to spend years with the novel’s imaginary cast and putting them through ever more scenes that reveal their desires, struggles, and sometimes shifts.

The Weight of Him started as a short story. I wrote tens of drafts and one version of it was longlisted in a fancy international contest and other versions received enthusiastic rejections. No matter how I revised, though, I couldn’t get the story to work. When I joined an excellent writers group, they at last lifted the veil. The story was too expansive—and the journey its characters needed to undertake too extensive—for the short form.

In general, though, I suspect most writers know instinctually when they start out whether or not they’re writing a novel or a short story. I think it’s good to begin intentionally, but to remain open to surprise and arrive through trial and error.

What I love about the novel is that Billy stands to lose so much more than weight—
and has so much more to gain. Could you talk about this please?

Gladly. There was so much to get wrong in this novel it was paralyzing. I really didn’t want to write so directly about the difficult subjects of grief, obesity and suicide. Didn’t want the book to have even the whiff of weight loss as a means to an exemplary end.

I was afraid of how readers would receive the work—especially because I was a 140lb woman writing about a 400lb man and because I worried suicide was much too close to the nerve for friends and family I hold dear.

I gave up on the manuscript many times, but the story and its protagonist, Billy, kept returning. I can’t count the number of times I raged at my computer screen, wondering why tf I was writing this? Then came a shift and I started to think on all I might get right in the novel. I knew grief, body shame, and suicide, and they were struggles that needed a much bigger and compassionate spotlight.

The crux of Billy’s story isn’t weight loss. It’s recovery. In the haze of fresh grief, an overwhelming state that can make us simultaneously crazy and steel-eyed, Billy sets out to regain his dead son, his disconnected family, and his detached self. The irony is that his crusade runs the great risk of his losing the very things he most seeks to save.

Once I knew Billy and his story intimately, I surrendered to the novel while remaining mindful of the responsibility I bore to its inhabitants to render them with care and love. For better or worse, I followed that inner voice that told me to trust the story and myself, and so it went.

What kind of writer are you? Do you have rituals? Do you plot things out as they might be on the page, or do you just depend on being in the zone and on inspiration?
Right now I’m an exhausted writer. Nothing quite prepared me for the busyness and intense emotions around putting a first novel in the world. It’s been a whirlwind and I’m still spinning.
Typically, I’m a hard-working writer. I show up every day—sometimes for a few hours, sometimes for 9-10 hours. I don’t have the luxury any longer of focusing on just my own writing. My writing life now necessitates a lot of email, social media, events, interviews, essays, articles, reading, critiquing, phone calls, and more. As much as I can, I give back and I pay forward.
I’m not sure I have rituals so much as I’m predicable. I don’t ever wait for inspiration or that elusive feeling of being “in the zone.” I show up at my work desk every morning at 8 am, right after my daughters leave for school and I’ve fixed myself a cup of tea and buttered toast. I work, meditate, eat more, drink more tea, work. On good days I go for a walk or to the gym. The past couple of years, I’ve gotten lazier and more attached to my desk, something I’m trying to fix. Then there’s more work, more tea and food. Hmmm, yes I see the pattern.
I never plot. I have some spark that starts the story, and I have my character(s) and I go from there, line by line, scene by scene. I always try to finish each day’s work knowing what happens in the next scene, or at least in the next sentence. That way I can immediately delve into the story each morning. I revise obsessively and in final drafts I repeatedly read the work aloud, striving to make it my best.
What's obsessing you now and why?
Ugh. The state of the nation. Haters, injustice and oppression have always appalled me, but never more so than now. Fact really is stranger than fiction and it’s hard to believe how inept and farcical—and yet how horribly dangerous and divisive—our current administration is. That’s another reason I’m so exhausted right now. Our political climate is head and heart wrecking, but we can’t wear out or turn numb. We have to keep recharging, and keep resisting.
What question didn't I ask that I should have?

You might have asked if publishing my first novel, the realization of a dream, was everything I imagined it to be?

Unfortunately not. Rather, the publication of my first novel has further confirmed that story will always thwart the writer because it’s impossible to master, and that’s as punishing a fact as it is invigorating. I’ll always be trying to get closer…

Beautiful interview and this sounds like a really important book. Thank you, Ethel, for tackling the hard stuff. Can't wait to read it.

Thank you for posting such nice article read. I am very glad to read this. Really good one.
UI Design Company Bangalore, Web Application Development Services in Bangalore