The difficulties of writing a masterwork: The sublime Jennifer Haigh talks about Heat and Light, nearly abandoning the novel, writing, and so much more 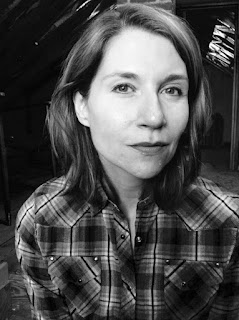 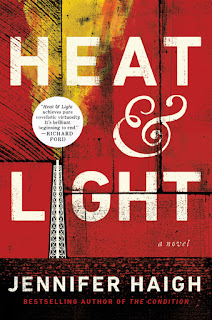 I so love Jennifer Haigh's work that I'd have her on the blog every week if I could. Her latest novel, HEAT AND LIFE is ambitious, profound, and absolutely dazzling. Richard Price calls it, "smart, sharp, hyperprecise, and near incantatory in its momentum." Ha Jin dubs it "a  thrilling page turner"  and Richard Ford calls it "Brilliant beginning to end." But that praise could be said about all of her novels: FAITH, THE CONDITION, BAKER TOWERS and MRS. KIMBLE, winner of  the PEN/Hemingway Award for debut fiction. Her short story collection NEWS FROM HEAVEN won the Massachusetts Book Award and the PEN New England Award in Fiction.

The thing I love the most about this interview (beside the fact that I get to do it) is the honesty about the process. She's said  that writing HEAT AND LIGHT nearly killed her, that she abandoned it but couldn't let go, until it finally began to coalesce. I'm so jazzed and honored to host Jennifer here. Jennifer, thank you for everything.

What was the generation of this book—what sparked you into to wanting to write about it?

I grew up in western Pennsylvania and still have family there, so the gas drilling phenomenon was on my radar from the very beginning. When I started writing HEAT AND LIGHT, the drilling boom was going full force, and the national debate over fracking was raging. Josh Fox’s documentary Gasland had just come out, and environmental activists were campaigning for a moratorium on fracking in New York State – a measure that eventually passed. Among my peers -- writer friends in Boston or New York -- there was overwhelming consensus that fracking was an environmental catastrophe in the making. So when I went back to Pennsylvania for a visit and an old friend told me his parents had signed a gas lease, I was stunned.  From his perspective, this was the opportunity of a lifetime; why would anybody say no?  I was struck by the contrast between how people in Pennsylvania viewed fracking, and the attitude in New York State.  The difference is that Pennsylvania has always been an energy state. The first oil well in the world was drilled there. The Three Mile Island nuclear disaster happened there. Coal companies dominated the economy for a hundred years. All that history has shaped the culture in profound ways, and I explore that in HEAT AND LIGHT.

How difficult a process was it to write this novel?   How did you write this?  Did the process differ from your previous books?

For me, the process changes every time. I approach each book as a unique engineering problem. Unlike a poem, which can succeed or fail entirely on aesthetic terms, a novel is a machine – a one-of-a-kind contraption I am designing, building, testing and re-testing, so that by the time it lands in a reader’s hands, all he has to do is turn the key and the machine will come to life and start moving on its own.

More than any other book I’ve written, this one has a lot of moving parts. There are so many strands to this story, so much history brought to bear.  When I’m writing, I don’t think about plot so much as causality – how each event has consequences that lead to more consequences. As I was writing HEAT AND LIGHT, I kept thinking about that old board game, Mousetrap -- the game Wesley is playing in front of the television as they watch the news about Three Mile Island. The object of the game is to build a complicated mouse trap out of unlikely parts:  a drainpipe, a bathtub, a seesaw and so on. As a kid I was obsessed with that game, that moment when you turn the crank and kick off the whole intricate chain reaction, which ends with the plastic cage sliding down the pole to trap the mouse. Writing HEAT AND LIGHT felt very much like that.  It’s a story that gathers momentum.  I love making sentences and take great pains to write to write good ones – but in the end, this is a novel, not a poem. When you turn the key, you want the thing to move.

Did anything about this novel surprise you?

Everything about this novel surprised me.  For the first two years I had no idea what I was writing. The shape of the book changed monthly, sometimes weekly.  What started out as a story about fracking became a love story, a deconstruction of what went wrong at Three Mile Island, an exploration of what it’s like to be transgender in a very small town, the rise and fall of a ruthless CEO. It took me years to understand how all these pieces fit together, the interconnectedness of everything.

As I wrote, I was surprised to discover how much of the story had to do with addiction, that perverse human compulsion to poison ourselves in much the way heavy industry poisons the land.  Like many small towns, Bakerton has a thriving bar culture, which is out in the open; and a methamphetamine problem, which nobody talks about. After the coal mines closed, addiction became the most successful local industry. When Dick Devlin was laid off from the mines, he opened a tavern. His older son is a corrections officer in a prison full of drug offenders, and the younger one is a counselor at a methadone clinic – an entire family employed, directly or indirectly, by addiction.


Writing this novel nearly killed you.  Could you elaborate?

HEAT AND LIGHT is a big book, an intricate book. It seems to me now that every thought I’ve ever had is in this book. From the very beginning, I felt overmatched by the complexity of the story. Twice I abandoned it entirely and started writing something else, but I found I couldn’t leave it alone. At several points in the writing process, I hit a point of complete cognitive paralysis. It’s exactly the way I felt studying calculus in high school, like I was mixing concrete with an eggbeater, asking my brain to think in a way it wasn’t designed to do.


I love the way you express the world as it was, as it is now, and as it might have been too. Can you talk about this?

We all live simultaneously in the past, present and future. Most of us can’t go ten minutes without recalling the past or fantasizing about the future, all while going about our business in the here and now. To be psychologically true, fictional characters must reflect that complexity. All the characters in HEAT AND LIGHT are haunted, to one degree or another, by the past, by broken promises and missed opportunities and dreams that failed to materialize. And in a way, I’m haunted too:  I’ve written two other books set in Bakerton, so I’m keenly aware of the town’s history, its glory days as a bustling coal town and its long painful slide into poverty after the mines closed. There is a collective memory of boom and bust, an ancestral memory even the young people carry, a peculiar nostalgia for times they aren’t old enough to remember. As one of the characters reflects, “The town is all aftermath.”

Like everybody, I am riveted by the upcoming election, a window into all that is best and worst in the American character:  our cynicism and idealism, our fears and bigotries, our short attention span and hunger for entertainment, our deep-seated and mostly unconscious sexism, our national delusions of grandeur and authentic capacity for heroism. There’s a novel in there somewhere.

I’m glad you didn’t ask it, but one question I always get has to do with research – how much I did, and what kind, and how it shaped the novel. I hate that question, because I can’t seem to answer it without disappointing.  The person asking the question is usually an aspiring writer, and she doesn’t want to hear that research doesn’t lead to a novel, that all the art happens long after the research is done. To write HEAT AND LIGHT, I spent years learning about fracking, about nuclear energy, what it’s like to work on a drill rig. I learned about organic dairy farming, heroin addiction, EST, the Iranian Revolution, thyroid cancer, female shot-putters, strip mining, disciplinary procedures in Pennsylvania state prisons. But when it came time to start writing, I made it all up.  Research is useful in constructing the skeleton of a character’s life. The rest is empathy – an imaginative leap into another human being, his interior weather, how it feels to walk through life in his body, to live in his house and make love to his wife and drive his car and wear his clothes. No amount or kind of research can tell you that.