Holiday book-giving season is coming, and with that in mind, the fabulous Sloane Crosley talks about her incredible novel, The Clasp, a family of rabbits, being the kind of writer who eats peanut brittle for breakfast and so much more 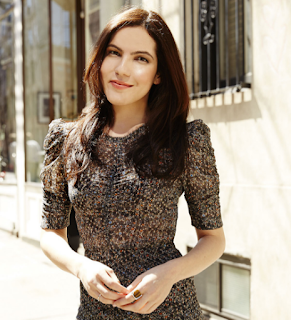 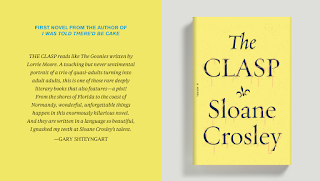 I am deeply mortified. I read The Clasp in galleys and loved it so much I tracked Sloane Crosley down and begged her to be on the blog. She graciously agreed, as long as it would be easy, and she answered all my questions almost immediately. And what did I do? I lined this up to appear in October, and it never showed. So with deep apologies (Please forgive me, Sloane,) I'm headlining your book today--and it's wonderful and funny and gorgeously written and by the way, it makes the PERFECT holiday gift for everyone.

Sloane has a pedigree. She is the author of The New York Times bestselling essay collections, I Was Told There’d Be Cake , How Did You Get This Number and the e-book Up The Down Volcano  She is featured in The 50 Funniest American Writers: An Anthology of Humor from Mark Twain to The Onion  and The Best American Nonrequired Reading .  I Was Told There’d Be Cake was a finalist for The Thurber Prize for American Humor.

Prior to writing full time, Sloane spent twelve years working in book publishing and was the Deputy Director of Publicity at Vintage/Anchor Books. She currently serves on the board of Housingworks Used Bookstore and is a co-chair of The Young Lions Committee at The New York Public Library, where she once interviewed Joan Didion on stage. She remains nervous about it.

The Clasp is a wonderful novel about three friends and one famous story, "The Necklace," and you need to buy it and read it immediately. Thank you, Sloane. Please don't hate me. I'll buy you cookies.

So, I’ve read and adored your past nonfiction, and I read and adored your first fiction. But I have to ask, was it scary to move into fiction? Did you consider your essay collections, which are fabulous, as stepping stones into a novel, or did the idea of writing a novel just strike you? Did you have doubts, and if so, how did you stomp them out?

Thank you! It’s so nice to hear all these compliments embedded in your questions. It was on-and-off scary. Though my litmus test for knowing that I had lost perspective was to pick up a novel at random from my bookshelf — oh, say, Lolita or Lost Souls or The Sports Writer or The Emperor’s Children — and if I started reading the first pages and thought, “what is the point of this?” I knew I was just down on the whole concept of fiction and had to walk away for the day. I don’t consider the essays stepping stones. I would never step on them, at least not with my shoes on. However, I have always wanted to write fiction and always have written fiction (I just haven’t published it until now). It’s a different muscle most of the time. So I wasn’t strengthening my arms (the essays) in the hopes of becoming a faster runner (the novel). The one thing that is the same is the doubts. But I think you have to have some of them to be a good writer. In all corners of life, I am dubious of people who claim to have no problems.

I always think that novelists write about the things that haunt them personally, hoping that the writing will lead to some answers to some particular questions. Was this the case for you? And if not, what DID spark the writing of this novel?

There’s a piece of that. I think you have to find the balance between wanting to answer a question for yourself and wanting to entertain the reader. Too much of the former leads to self-indulgent fiction and too much of the latter leads to soulless fiction. Several things sparked the writing of this novel, some big (exploring this love triangle, wanting to create an opportunity for characters who were feeling a life/work inertia to go on an adventure) and some small (seeing a sketch of a necklace in an old book, rereading Guy de Maupassant’s “The Necklace” and finding myself and my character in it).

What kind of fiction writer are you? Did you map this story out or just trust in that pesky muse? Did you have rituals for writing, bribes for yourself to finish a chapter?

The Clasp is so witty (you have a gimlet eye), the characters so real, and the situations so funny, but what I really loved was the sense of these three friends finding the beauty in reconnecting in a strong and important way. Can you talk about this?

Thank you. I think of them as having relatable and yet pretty unique friendships.  For example, there’s a kind of person in these large friend groups who tends to be a bit oversensitive and for whom nothing ever seems to work out and he’s one of my three main characters. Often that person is left out or shunned but that’s not Victor. He’s this specific type who’s still in the mix. I also think there’s something beautiful in what I’ll call calcifying dramas. Time hasn’t healed any of their wounds but it’s just deepened them in a way that these characters are accustomed to. They are accustomed to the old roles they fall back into and there is a strange sort of love that develops. There’s a point late in the novel when Kezia wonders aloud if they are all friends just because they had been smart and stupid in equal measure when they were teenagers and that had landed them at the same college. But, hopefully, by the time a reader gets to that scene, she will know more than the characters know and see how untrue that is. There’s real love between these people, snide as they can be with each other.

Ah, when I was little I was diagnosed with a spatial learning disability and my parents became a bit overprotective of me, academically. So I wrote a story about a family of rabbits who bring the baby rabbit carrots. Then one day the family gets shot and the baby rabbit starves because he doesn’t know how to fend for himself. Why the rabbit was a boy rabbit is just as much of a mystery to me now as why I created a metaphor where my whole family ceases to exist. I mean, they’re nice people.

What’s obsessing you now and why? Endangered species. What’s not to obsess about?

What question didn’t I ask that I should have? There are tons of questions left to be asked! So I will just provide a bunch of random answers instead: Leo. Istanbul. Lily of the valley. The Once and Future King. My mother. Archaeologist. The violin. Knives. Old book smell. A taxidermied chicken I’ve named Horatio.