Benilde Little talks about Welcome to My Breakdown, grief, happiness, writing, loss, and so much more! 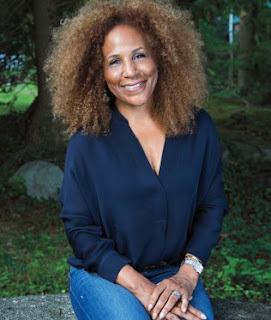 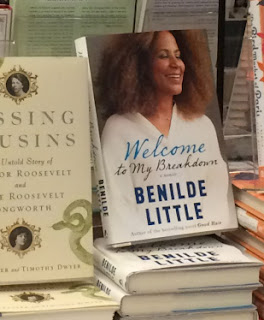 A week or so ago, I was having this wonderful lunch with the amazing Christina Baker Kline when we wandered into her favorite bookstore and she said, "Oh, I have to introduce you to Benilde!" Benilde Little is one of these people you instantly bond with. I even said to her, "You know, I think you are my new best friend," and I meant it. I swear, electricity and joy bounds off her. And she's written a fabulous memoir, Welcome to my Breakdown. She's also the author of Good Hair (one of the Ten Best Books of 1996 from the Los Angeles Time, ah hem), The Itch, Acting Out, and Who Does She Think She is? I'm thrilled to have her here, and the only thing better would be having coffee with her and Christina! Thank you so much, Benilde.


So this is your first memoir. How terrifying was that? And what did you learn from writing it?


I wouldn’t say it was terrifying. What I’d been through was, but writing about it was almost the easy part—although for me writing and easy are never in the same sentence. What was scarier was sitting on myself, of not writing. What I learned is that anything worth writing about should be scary. As I tell my kids when they’re faced with doing something new, something that’ll help them grow, to be afraid but do it anyway. I learned that my mother’s death wasn’t the sole reason for my depression, but I’d also lost myself. I was also mourning myself as a writer. I’d stopped writing and got lost in a domestic dungeon.

What kind of writer are you--and were you, in this memoir? Do you outline, have rituals, need chocolate and coffee? Were there moments of self-doubt and how did you conquer them?

This book was written in pieces, over chunks of time. Some of it, I honestly don’t know how I got it done. When I was in the thick of my depression, my memory just stopped working. In general, I do not outline, but usually write many drafts, about 3, before I figure out where I’m going. With this book I did do a bit of an outline, after I had hundreds of pages of just stuff.

I do not outline not when I write fiction. I have no rituals, but of course I need coffee, chocolate only sometimes. I try to watch what I eat, but when I’m writing anything sweet usually finds it’s way to me. There were years of self-doubt. I hadn’t published a book in nine years, since my last novel Who Does She Think She Is?  The world had changed dramatically since then. I conquered the self-doubt the way I always do, I don’t actually, but getting my agent’s feedback helps tremendously. My agent, Faith Childs, is one of the smartest people I know and is a great reader, so if she thinks there’s something good in what I’m writing that’s usually enough to help me keep going.

What I loved about this book was how brave you were about writing about depression. So many people dismiss clinical depression as just the blues, but it isn’t--it’s many, many dark nights of the soul and it’s difficult to find your way out. But the book is also about grief--the death of your mother--and how that jump started depression, which began to change your worldview. Can you talk about all of this, please?
I still miss her, although it’s no longer a daily or even weekly thing and the pain does not cut into my marrow anymore. My worldview got a little more cynical because I’m conscious of feeling so much more alone. I’m no longer that idealist who believed nothing really bad ever happens. She was the person who understood me best and loved me the deepest so the absence of that is a tough thing to accept, but I have. I became the matriarch of my family and I don’t want to be, so I’m probably more resentful than I was. I’m waiting to get the feeling of freedom some people experience after they loose a parent, where you no longer give a crap, but that hasn’t happened to me. My husband says he felt that after losing his dad.

When it’s gone, it’s gone and there are no rituals to duplicate what my mother was to me. I have to live with that and sometimes it just makes me mad. I’ve never liked the holidays, but now I straight up hate them. She’s not here, so Thanksgiving is particularly sad for me.

There is something so incredibly helpful about your honesty in the book. It’s a kind of “I have been through this and survived and you can, too” which operates as a real life raft. Did you always know that you were writing this to help others, or, at first, was this your way of making sense of everything that had happened to you--and then it branched out to be universal?
It was a life raft for me, but I also knew that the book would help other people, especially women. For the Black women who come to my events—these are accomplished, polished professionals with all the trappings of “success.” These women are removing their masks. They open up about their disappointments and sadness and pain and in doing so, sharing it, realize that they are not alone. Knowing that I’m midwifing some of that, feels amazing.

So, yes, I knew that if this book could find an audience, it would open up a dialogue for women to grab hold of the life raft. The invitations to do book signings and speak to organizations, churches, libraries are increasing and it’s pretty much all been word of mouth. I’m thrilled. Generally, when you open up, other people will too.

Now, if you reread your memoir, what would you add? Is there anything that you now feel differently about?
Yes, there’s a lot I didn’t put in—there’s a story about a superstar mommy moment I had with my son after a devastating baseball championship loss, for which he’d been the pitcher and had felt responsible. He had decided that he was done with baseball. He broke the head of his second place trophy (very out of character).  The next day my son, Ford, was to play in the all-star game. He refused. After his dad failed to talk Ford into playing, my husband asked me to give it a shot. I went down to the basement, where my son had slept the night before—in his uniform. I didn’t talk to Ford about baseball. I talked to him about life. I blabbed on about getting back on the horse. I must’ve talked non-stop for 15 minutes. At first he was turned away from me, then he put his head in my lap. Then I had him.  I got him to go back the next day to play in that game. It was a highlight for me as a mom.  I regret that I didn’t include more of my Newark childhood. I wrote some about my alma mater, Howard University, but after reading Ta-Nehisi Coates’ beautiful book where he so eloquently describes his time at Howard, I wish I could do mine over. He really described why Howard is so important, what it did for him. He described what it did for me. But I think everyone much feel some regret for what’s left out. Or is it just me?

I recently read this wonderful book by Claire Bidwell Smith, After This, which is about grief. A grief counselor herself, Smith talks about how the mistake many people make is to try to get over a death, rather than to realize there is still a relationship going on--and it will always go on. My mom is going to be 99, and I can’t imagine losing her. How do you personally still feel connected to your mother now that she is gone? Is it through memories? Through your own mothering?
Probably most through my own mothering, which so often feels exactly like hers: fiercely loving. They know just as sure as they walk and breathe that’d I’d die for them; no question, no hesitation. When I’m pushing hard at my son’s school, insisting they provide something for him that my taxes are paying for, for something he is owed and perhaps something other people aren’t getting because they aren’t demanding it, I can literally feel my mother inhabiting my body. I don’t have any rituals to I keep her alive, but she’s in me and I know that as surely as I walk and breathe.

What’s obsessing you now and why?
Young marriage—people who get married young. I’m thinking about my next book, a novel, and it’s kind of a meditation on marriage and the difference in marriages of people who do it when they’re young versus people who marry in their thirties to early 40s. I got married a month shy of my 34th birthday. I couldn’t imagine getting married in my 20s, but now I wonder what that would’ve been like. I find myself envying people who met in college and got married. This started when my daughter had her first serious boyfriend when she was 18. It lasted for about a year and a half and they were very serious.  There was something so pure in their interaction that it changed my opinion about it. I can now see the benefit of marrying young. Right now though my I’m obsessively managing my son’s education (he just started high school), getting him and my  90-year-old father who has dementia, settled (moved). I’m spending much of my time on the phone and emailing. It’ll be over soon and I can get back to my work. One constant obsession is why is all of this grown up life so hard!!!

What question didn’t I ask that I should have?
Your questions were all good. I can’t think of anything that I’m dying to answer. Thanks for including me in your blog. I hope we get to talk again.
Posted by Caroline at 10:10 AM

You have such an interesting blog. Thanks for sharing. I'm a self-help blog author and reading blogs is my hobby and I randomly found your blog. I enjoyed reading your posts. All the best for your future blogging endeavors. Please keep in touch with me in Twitter, @selfhelpnemonik