Megan Feldman Bettencourt talks about her incredibly important book, TRIUMPH OF THE HEART: FORGIVENESS IN AN UNFORGIVING WORLD, how the world sees forgiveness--and how it should see it, and so much more 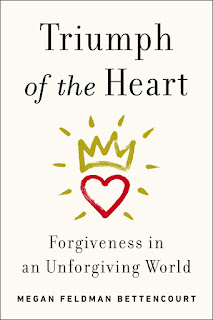 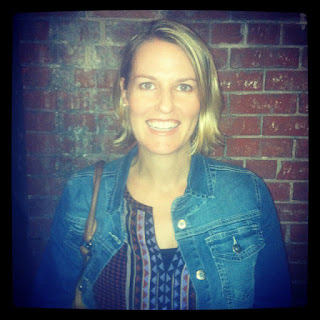 What's more important in the world than kindness? Maybe it's forgiveness. But how do we come by forgiveness and what does it really mean? That's the cornerstone of Megan Feldman Bettencourt's astonishing and provocative new book, coming August 11, which explores forgiveness through memoir, stories and science. She is an award-winning journalist whose work has appeared in publications including The San Francisco Chronicle, Newsday, Glamour, Details, and Southwest: The Magazine.  Learn more and pre-order the book here.

You can also hear her wonderful Ted Talk here.

Thank you so, so much, Megan!

I love the whole topic of forgiveness, especially in a world as hard as ours. What can the average person do to jump start forgiveness in his or her own life?

The place to start is to consider whether you’re harboring resentment or bitterness against yourself or someone else.  At whom are you flinging nasty insults, even if only in your mind? You can write that person a letter (without necessarily sending it). I’m endlessly surprised at what happens when I sit down to write in my journal about something that’s bothering me. It’s like going through a box you’ve kept in the garage – you’ve had that niggling annoyance and anxiety about the gathering dust and lack of space, but you don’t even remember what the hell is in there anymore. Taking ten to twenty minutes to write out – unpack, essentially- what’s bothering me about myself or someone else and letting myself feel however I happen to feel about it is the beginning of letting it go. That’s something I learned from the experts in my book, as well as the extraordinary people I profiled. With trauma or a big loss, you have to let yourself notice and feel the hurt or anger first, before you can get to a place where forgiveness is possible. There’s no skipping ahead to forgiveness or “zenny peace,” as a friend of mine jokingly calls it. That’s why therapy and meditation, while roads to peace, can be hell. It’s also why one man I write about in the book, who lost his son and forgave the killer, loves the Rumi quote, “There’s no cure for the pain but the pain.” Now, when it comes to ourselves, we can be utterly merciless, thinking awful thoughts about ourselves that we would never unload on another person. The first step is simply noticing our grudges and criticism, and the second is to begin practicing more kindness and compassion with everyone, including ourselves. One of the many techniques I discovered to make that easier is to explore the possible reasons someone did something that pissed your off or hurt your feelings, or why you yourself did. The organization I profiled that unites Israeli and Palestinian girls at summer camp, Creativity for Peace, their slogan is, “An enemy is a person whose story you haven’t heard.”

It seems to be that honesty is so much a part of forgiveness. I’m thinking of the letter you mentioned where a son wrote to his father, I could be a better son if you’d come to one of my ballgames. It takes incredible courage to write something like that, to be that honest--and you can imagine that only the worst sort of father wouldn’t apologize and respond--and be forgiven.  Can there ever be forgiveness without honesty?

That’s very astute, and very true. I saw this in so many of the stories I write about in the book. There can be no forgiveness – and no redemption – without honesty. Because at its core, forgiveness is about connection. It’s about recognizing that we’re all flawed human beings in need of compassion and understanding (some would argue that’s not true of sociopaths, but they comprise a small percentage of the population). Dishonesty and pretense kill the opportunity for vulnerability and connection. They throw up walls. Also, so much suffering comes from the explanations we give to things. Take that boy you mention. He assumed that his father didn’t go to his games because he didn’t love his son and/or wanted to hurt him. That interpretation is brutal, and it may not even be true. Without honesty, there’s no way to sort those things out – truth versus perception, intentional actions versus unintentional ones. Another man with an absentee father told me that when – as an adult - he asked his father why he wasn’t around much when he was a kid, his father replied, “I didn’t want you to be like me.” That kind of honesty is heartbreaking, but it also deflates the storyline of the uncaring or malicious father who just never really gave a shit or wanted to ruin his life.

How is self-forgiveness different than forgiving others? Which is more difficult to do and why? Can you forgive someone else if you haven’t forgiven yourself first?

For most of us, self-forgiveness is harder (minus the small percentage of true sociopaths and narcissists). In part that’s because if we’ve made a hurtful mistake, we usually avoid providing an authentic apology for our part in the situation and then doing what we can to repair the damage. That’s uncomfortable, and we don’t like to be uncomfortable. But we know from research that redeeming ourselves makes it much easier to forgive ourselves. When it comes to forgiving self and others, I don’t like to get too caught up in some sort of “step by step” chronology. Often these things aren’t linear. When we’ve been hurt, blaming ourselves and the person who hurt us is a common response, and often we blame ourselves most. We tend to expect that if we do things right and behave well and are generally good, the world – and other people - will be kind to us.  If they’re not, we assume that we fucked up or happen to be terrible worthless people. And of course it doesn’t work that way. As Hemingway put it, “the world breaks everybody,” so it’s about applying the lens of kindness and compassion to other people and ourselves, at the same time.

You mention how meditation alters the structure of the brain, but would you say that cognitive behavioral therapy would also be helpful in terms of becoming more empathetic and forgiving? What also fascinates me is the science, the whole idea that emotions can heal or harm us physically. What was it like researching this, and what surprised you the most and why?

Yes, cognitive behavioral therapy can have similar effects if instead of going round and round attached to and identified with your negative perceptions and storylines, you’re noticing them as a neutral observer.  Researchers at UCLA found that when subjects were shown a picture of an angry face, electronic activity rose in their brain’s amygdala, preparing the body to respond to what seemed like a threat. Yet when people labeled the emotion they felt upon seeing the picture—“I feel angry,” for instance—activity lessened in the amygdala and increased in another area, the right ventrolateral prefrontal cortex. This area is associated with thinking in words about emotional experiences, processing emotions, and inhibiting behavior. So just noticing and labeling our emotions turns down the amygdala alarm response and the adrenaline-fueled reactions it triggers. That makes it a lot easier to be calm, rational and forgiving. I’m not sure how linked CBT is to empathy, but certainly taking the time to question our judgmental tendencies and kneejerk rush to blame leads to more empathy – for others and ourselves.

What surprised me most were the stories I encountered where people forgave unrepentant offenders, and their forgiveness lead to a remorseful apology. We expect it, we want it, to be the other way around. It’s harder to forgive someone who hasn’t apologized or seems oblivious to the impact of his actions. But meeting people like Jean-Baptiste, who found it within his power to show compassion to the man who murdered his mother during the Rwandan genocide, that was amazing to me. And what really struck me was when those acts of mercy and forgiveness were the one thing that made an unrepentant offender actually acknowledge what he did and then apologize.  That phenomenon could radically change our world if we let it.

What’s obsessing you now and why?  What question didn’t I ask that I should have?

What obsesses me is that so many people write off forgiveness, or condemn it, without even knowing what it is (to their own detriment and that of others). An Op-Ed in the New York Times after the Charleston families forgave shooter Dylann Roof railed against the concept of forgiveness, but based its points on an antiquated, unhelpful perception of the word that conflates forgiveness with patronizing religious jargon, condoning an act, and foregoing justice. So many people are stuck in bitterness, resentment and blame merely because they think that forgiving would mean excusing an offense or having to be besties with someone who has unjustly hurt them. It does not mean that. And as long as we as a society operate under that faulty perception, peace – inner and outer – will be hard to come by.