Erika Swyler talks about her astonishing debut, THE BOOK OF SPECULATION, having her fortune told, 18th Century circuses, and so much more 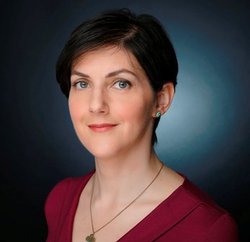 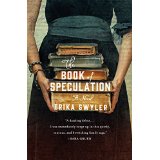 I love, love, love debuts. What is more wonderful than watching a star take off? I felt that way from the first pages of Erika Swyler's wonderful The Book of Speculation, and I'm thrilled to host her here. Thank you, Erika! (And how can you not adore an author who gets her fortune told?)


I always want to know what sparked an author’s book, what was obsessing you so you absolutely had to write The Book of Speculation?

I'm a person who obsesses. I'm obsessed with books, circus, water, erosion, family, and folklore--all of it. At the heart of those things is an obsession with inheritance. I was fixated on what gets passed down through generations of families--land, values, history, love and trauma. It manifested in this story, which is ultimately a story about what we do with our inheritance.

So, the novel has gotten all kinds of praise. It made the June Indie Next List, it was a Barnes & Noble Discover Great New Writers Pick, a Library Journal Editors Pick and an Amazon featured debut and Top Pick of the Month.  How does it feel, seeing as this is your new debut, and how does it make writing the next novel easier--or harder?

I'm insanely lucky, and this is very much a once-in-a-lifetime moment. Still, the great thing about books and reviewers is that for every person who tells you you've done something amazing, there's another who says your writing is awful for the exact same reasons the initial person loved it. (I wonder if they've picked up on that yet.) It keeps my head from getting too big. The next book is quite different, so I feel like I'm learning to write a novel all over again. It's more difficult in the sense that I'm no longer writing in a vacuum--people know what I'm up to. Inevitably, that means there's someone who's disappointed that I can't churn out a book in two months. At the same time, there's someone who's disappointed that I'm not writing more quickly because they want to read it. That's wonderful.

There’s this wondrous traveling circus in your book at the turn of the 18th Century and it spans 250 years. How did you research that? What surprised you in your research?

I spent so much time in libraries that I really should have brought a tent. I dug through journals and books to find whatever I could about the period before Barnum came on scene. Incidentally, librarians were fantastic at accessing journals that I, as independent researcher, would have had to pay for. "I'm writing a novel," isn't always enough to hop a paywall. "I'm with the library," works well. I also dug through archives of historical societies from the towns my circus moves through. Burlington, NJ, and Charlotte, NC, have an incredible number of documents available to the general public.
It was surprising to discover how far back some circus families' histories go. The Wallendas have essentially been touring since 1780s. That's practically half of circus's recorded history. That's difficult to really wrap your brain around.

Your book has been compared to The Night Circus. But tell us what’s different about yours?

The Night Circus deals more heavily with fantasy than I do. The Book of Speculation is a tango between reality and folklore that infuses the ordinary with elements of wonder. I don't see why we can't mythologize the everyday. Then there’s scope. The Night Circus is essentially constrained to one lifetime. The Book of Speculation jumps through 250 years of a family’s history. For me that was great fun because I got to ask the reader to look for overlaps and play with allegory in a way that smaller scope doesn't often allow. I'm also shamelessly bending genre. The Book of Speculation borrows elements from historical fiction, fantasy, magical realism, mystery, family saga, fairytale, and literary fiction.

What kind of writer are you? Did you map this all out and do you wait for the muse?

I'm a messy writer, a terrible slob, really. I rely heavily on inspiration for that initial push on a project. I can't settle in for a long haul unless my brain is itching for it. The other part of me is quite business-minded and knows that inspiration is more likely to strike if I always have a notebook on hand and regularly stare at the pages. I'd love to say that I'm an outliner, but I'm not. I write endless drafts, keep ten percent, toss the rest, and then do it again and again until a book takes shape. It's inefficient, but it leaves the door open for unexpected moments. When I have a working draft, I outline. Yes, that's backwards, but sometimes you need a map to get through your pages. With The Book of Speculation I had a notebook where I kept a family tree. That tree helped me organize plot points. It was far too unwieldy for the book, but it was essential framework for shaping the story.

I absolutely fell in love with the feel of your book. The pages have a ragged edge and they look mysteriously weathered, and you’ve included your own drawings in the story as well. Was this something you wanted to do right from the start?

The illustrations happened late in the process. Bizarrely enough, I submitted my manuscript to editors as the old book in The Book of Speculation. I bound and aged copies, and included tarot cards and the illustrations mentioned in story. I thought that seeing the book and drawings would make for an interesting interactive reading experience. It never crossed my mind that I was illustrating a novel. I was floored when St. Martin’s bought the art as well as the manuscript. As edits went on, it was clear that it always was an illustrated novel. As ever, I was just slow on the uptake.

At the moment I'm obsessed with time, more specifically different experiences of it. It's a common thing to fixate on as you age. It's also quite a bit like water, so I guess it's a natural progression. I've been thinking a lot about protracted time and what a stretched second might feel like, particularly if someone is aware of it, or what it might feel like for time to suddenly pull backwards. I guess that means I'm thinking about getting older and the chaos of it all. Oh, and tall ships. I've got a thing for tall ships so I'm always up for obsessing about tall ships.
What question didn’t I ask that I should have?

Oddly enough, considering the book, no one has asked me if I've had my fortune told. I did recently have my palm read. The palmist looked at my hand told me that my life was ruled by water, and that all my creativity came from it. I blinked at him for a while, and then left to find a stiff drink.
Posted by Caroline at 1:33 PM