Maggie Mitchell talks about PRETTY IS, ghosts, little girls, and why memory is so tricky


What's more exciting than a debut? In Pretty Is, Maggie Mitchell  tells the story of two young women who have to remember when they were abducted at twelve.  I'm thrilled to have her here. Thank you, Maggie! 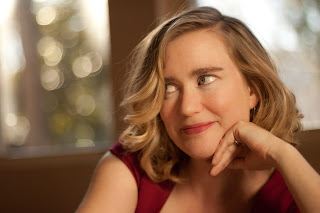 “Haunting” is a good word for it! I was haunted by a newspaper article I read long ago. Over the years, all of the details were stripped away, but the skeleton story that remained was this: two young girls who have never met are abducted by a strange man. After a period of time in captivity, they escape. And that’s all.
I don’t remember when I read the article. I think the abduction might have taken place in California, but I wouldn’t swear to it. I have a glimmer of a sense that the man treated the girls appallingly; maybe they were kept in a basement; probably they were held prisoner for days rather than weeks. But all I could think was: And then what? Had they become friends? Would their parents let them keep in touch? What would they come to mean to each other, over the years? What would they remember? Would their memories differ? How would their relationship mediate the experience itself? Eventually these questions began to produce a story that had almost nothing to do with the original fragment of disturbing news. It became, for me, a story about female friendship, the intensity and unruliness of adolescent desire, the fraught relationship between past and present. When I decided that the time had come to write a novel, I tossed around a few different ideas—but this was the one the clawed its way to the forefront and wouldn’t let go.

This gripping novel falls under the category of “my worst nightmares”--it’s stunning, shocking, and it delves into how the past makes our futures. Do you think we ever can escape that?

I don’t think any of us can escape the past altogether, and of course it irrevocably shapes the future. For Lois and Chloe, there’s no escaping the event that defined their childhoods, though you could say Lois’s novel is an attempt to rewrite it. The only way forward for them is to seek to understand it, and try to seize some measure of control over how it will shape their lives. That it will shape them is unavoidable, but it doesn’t have to doom them to sadness or solitude.

The book is so much about memory--what we choose to remember and what we wish we could forget. Can you talk about that please?

One thing that interests me about these characters is that they are profoundly connected by their shared memory of their weeks in the cabin—and yet, at the same time, their memories aren’t identical. Intentionally or unconsciously, they have created different narratives of that summer. The novel’s structure arose, in part, from my fascination with the subjectivity of memory: I wanted to juxtapose Lois’s version of events with Chloe’s, and both with Lois’s novel; and I wanted to place all of these narratives, full of partial truths and omissions, on a sort of collision course, and see what happened.

When I first read Marilynne Robinson’s beautiful novel Housekeeping, many years ago, I was struck by a passage in which the two sisters at the heart of the novel disagree as to what color their mother’s car was. It’s not an especially significant detail, but it’s a small part of their picture of the day on which their mother committed suicide, and from that association it acquires significance. If they can’t agree on something so simple, in what other, more profound ways will their memories of their childhood differ?

Memory is narrative, as selected and distorted as any work of fiction. And yet to a considerable extent we are our memories. Are we fictions, too?

Oh, I so want to say that I rise before the sun every morning and write so many thousands of words before the house stirs! But I’m not that kind of writer, and I’ve decided that it’s okay. Sometimes I write in crazed bursts. Sometimes I don’t seem to be writing at all, though I’m actually working hard, imagining characters and sorting out plots and shapes and moods in my mind until at last it feels safe to entrust them to the page. I’m always working, but it would be hard, sometimes, for me to prove it.

I’ve been thinking a lot about ghosts. I don’t believe in them—I’ve tried, but I can’t do it!* Conceptually, though, ghosts are such a dramatic embodiment of the endlessly fraught relationship between the past and the present. I want to figure out a way to write about ghosts that avoids all the traps—cliché and predictability and silliness. It’s a challenge. I’m in the very early stages of working on a novel that deals with insane asylums and ghosts and history. I’m gently untangling the threads.

*(As a teenager I once even conducted a weird ceremony designed to persuade any resident ghosts to announce their presence. Our house was a century or so old and had seen better days and I really thought it should be haunted. Nothing happened, of course, and in my disappointment I wrote an angry letter to the house, basically accusing it of being soulless. I wrote it in calligraphy and rolled it up in a scroll and tossed it into the space between my bedroom’s drop ceiling tiles and the original crumbling ceiling. Years later my mother found it and mailed it to me without comment.)

I keep expecting someone to ask me about the novel’s title. I had it in mind from the very start, before the story had fully taken shape. “Pretty is as pretty does” is something my mother said to me, and her mother said to her; lots of women I’ve talked to remember the same thing. It taps into our anxiety about the connection between beauty and “goodness” or virtue, which is something I wanted to explore in the novel. It’s also a warning, I think, and a specifically gendered one, at that: it raises the possibility that beauty and goodness are actually mutually exclusive; that if you’re one, you can’t be the other. It also forces you to contemplate the bad things you haven’t even done yet: if pretty is as pretty does, then prettiness is inherently unstable—something you have to keep earning. Lois gets caught in this moral conundrum when Zed asks her if she thinks she’s a good person and she doesn’t know how to answer; Chloe confronts it when she’s forced to play a character who is unrealistically unaware of her prettiness. If the character were conscious of her beauty, the director explains, she would lose the audience’s sympathy. Chloe understands that this equation is deeply flawed, but it’s an argument she can’t win.

By seeking the spotlight as children—Chloe through her pageants, Lois with her spelling bees—both girls have already expressed a desire to be seen and admired that could be construed as vain or superficial. Their “pretty does” credentials are already in danger. Their abduction only complicates the issue: did Zed choose them for their pretty faces or for their talents? Or both, or neither? And to what extent does this define who they really are, who they’re going to be? Even as adults, these questions remain central to their troubled identities.

In our culture, little girls are pressured to be pretty, praised for being pretty—and at the same time taught to associate prettiness with shallowness and frivolity. I’m sure our mothers mean well when they shake their fingers at us and intone “pretty is as pretty does”—of course the actions we choose are more important than the way we happen to look!—but they’re also contributing to a strange network of mixed messages girls have to navigate as they figure out how to define themselves.

Lovely insightful Q&A on an intriguing novel. This is one that is going to get book groups talking.