Dylan Landis talks about her extraordinary RAINEY ROYAL, the turbulent 1970s, the sharp edges of girls, and so much more 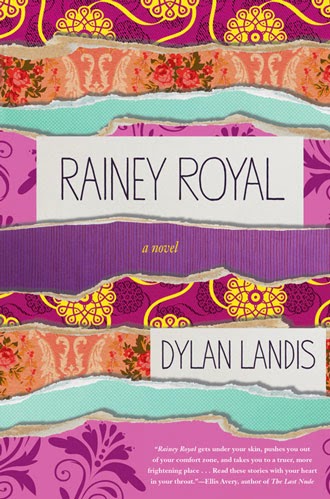 It's been called captivating and unnerving. It gets under your skin like a thorn--and you want it there. Janet Fitch said, "It should carry a warning sign: do not read before bedtime." Joanna Rakoff called it "beautiful and brutal," and Roxane Gay said, "there's edge and tenderness and longing to be found." Dylan Landis' debut novel, Rainey Royal is all that, and more. About girlhood, sex, friendship and fighting for your place in the world, it's an absolute stunner.

Dylan is also the author of Normal People Don't Live Like This, and her fiction has appeared in O. Henry Prize Stories 2014, Bomb, Tin House, and Best American Nonrequired Reading. She's won a fellowship in fiction from the National Endowment for the Arts and has written six books on decorating. I'm so thrilled to have Dylan here. Thank you, so much, Dylan!

Your first book was a collection of linked short stories. How difficult and/or strange was it to write a novel? Did anything about it surprise you?


The novel, Rainey Royal, also began as a set of tightly linked stories. So the surprise lay not in the writing but in revision, in going back and giving them the arc and the weight of a novel. It took much weaving and reweaving to work characters and iconic objects and subplots through the book from beginning to end. For example, a story about Rainey's Aunt Laurette became chapter 12, so Laurette now had to make earlier appearances. A story about a robbery became chapter 3, but the plunder from that robbery had to turn up elsewhere. Rainey's longing for her mother had to resonate throughout. I had to retrofit the book with unity and layers and resolution. That took a while.


Will your next work be a novel?


I hope so. I'm so in love with the distillation of the short story, the sprawl of the traditional novel does not come naturally to me. But I'm trying. A novel requires airspace and I'm working to embrace that, to learn to defer the action, not to frontload everything in the first fifteen pages for fear of losing the reader. And yet don't you have to start with a character in trouble? My favorite novel, Toni Morrison's Song of Solomon, takes its time unpacking the storyline, and I've probably read it ten times.


The setting, the turbulent 1970s, is very much a character here. What made you set the book during that time period, and in the Bohemian heart of New York City, and what was your research like?


I grew up in New York in the '60s, till I was twelve, and then in the suburbs through the '70s, but very city-connected. Those years every nerve ending was alive, and I remember so vividly how everything around me looked and smelled and sounded. It was the most intense setting I could bring to life from memory. It was dissolute and enthralling and our parents had no idea what we were doing. The Met was waiting to be explored and school was waiting to be cut and the music was charged with burgeoning sexuality and curfews were waiting to be broken and there was a sense of physical danger on some blocks, true or not. Kids were marching in Washington with their parents and it really mattered how your jeans fit. I don't have the same sensory access to any other decade, or to any other cities I've lived in and loved.


What I researched was jazz. I'm not remotely musical. I went online and watched people play instruments, so I would know how they moved. And I Googled "terminology of jazz" so I would have a vocabulary with some metaphorical freight, like when Tina thinks about the inner voice of the music, and of course of her own heart.


Rainey is an extraordinary creation, a tough, fierce, tender girl struggling to become an artist--and a person in her own right. Actually, all of the girls in the novel are astonishing. There’s such a dangerous edginess to the girls’ friendships, their sexual escapades, their lives. How did you go about crafting them?


One line of dialogue and gesture at a time, draft by draft by endless draft. It was a process of discovery. There was so much I didn't know about these girls until I wrote a couple of new lines and thought, Oh! So Tina's grandmother isn't blind—but Tina really does take care of her—and with such grace—I had no idea till I got there. Or that Rainey won't ask for a glass of milk from Gordy because milk feels too intimate—that sprang itself on me, like nearly everything else. All I knew for sure was that they had to have very sharp edges, these girls, and they had to be vulnerable where it didn't show. Andrea Barrett talks about how the "layers accrete" as she writes draft upon draft upon draft, and that was my experience.


What kind of writer are you? Do you put out a welcome mat for The Muse or do you outline everything until you have a solid skeleton?


The welcome mat's always out, but I don't wait for The Muse to enter. I try to just write, however badly. If I can't write, I revise. I've tried outlining for the novel I'm working on now, and sometimes it feels reassuring; it gives me something to write toward, a sense of direction. I like in particular the index-card method that Robert Olen Butler describes in From Where You Dream; it's a much looser version of an outline. But sometimes knowing too much makes me feel, as Robin Black says, like I'm doing a paint-by-numbers picture. With my best stories, I knew how a scene opened, but I didn't know the ending till I fell over it. So my answer lies in the middle of the spectrum you describe. Welcome mat, but don't wait. Think ahead just a little. Work in the dark.


And honestly if the Muse just peers in at the window I feel lucky.


Hoarding and collecting and art, and the places where they might intersect, if they do. I saw a hoard when I was little, a newspaper hoard, and it overwhelmed and fascinated me, and I never forgot wanting to explore the pathway that led into it and see what secret lay beyond those towering stacks of newsprint. It was in a large storage room of the basement of our building, and I knew the porter lived back there. Rainey has an aunt who's a hoarder, and there's a hoarder in the novel I'm trying to write, though that project is shape-shifting as I work on it. I'm also fascinated by the way art exists in us as a drive apart from morality. Rainey's father says at one point, "An artist can't be a criminal," but of course that's not true. Rainey is an artist and she does something criminal at one point, and so does her father's musician-acolyte, Damien, who lives with them. Yet art can save us. It can hold us together when nothing else works.


Rainey's been in two books—will she come back?


She's my alter ego. I miss her already. I'd love to write about her at an older age. I'd love to hear Rainey's voice in my head again.

Everything about this conversation wakes up my nerve endings. What an extraordinary book, and what a gift you two are to the writer world.