Julie Metz talks about EVA AND EVE, her stunning new memoir, reliving her mother's extraordinary life, and so much more 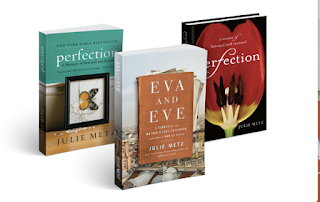 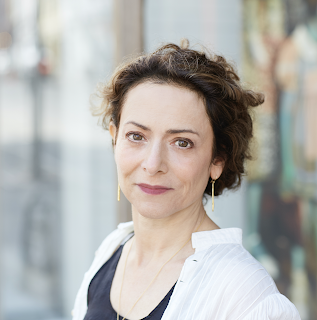 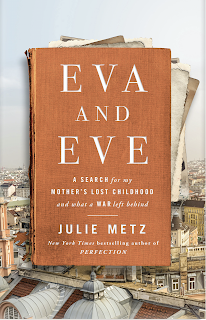 Julie Metz is the author of the newly released memoir Eva and Eve and the New York Times bestselling memoir Perfection, a Barnes & Noble Discover Great New Writers Selection. She has written on a wide range of women’s issues for publications including: The New York Times, The Huffington Post, Dame, sheknows.com, Salon, Slice, Redbook, Glamour, Next Tribe, MrBellersneighborhood.com, and Coastal Living. Her essays have appeared in the anthologies The Moment, edited by Larry Smith, creator of “Six-Word Memoirs,” and The House That Made Me, edited by Grant Jarrett.

Julie is a fellow of The Yaddo Corporation, The MacDowell Colony, The Virginia Center for the Creative Arts, and The Vermont Studio Center. She is also the winner of a Literary Death Match, the international competitive reading series founded by Adrian Zuniga (she brought a sword).

Julie lives with her family in the Hudson River Valley. I'm thrilled to host her here. Thank you, Julie!

C: What was the “Why Now” moment that haunted you into writing this particular book now?

J: I like your use of the word “haunted,” because that is kind of what happened. My mother and I had a complicated relationship during our lives together and that didn’t end with her death. Shortly after she died, I discovered a keepsake book she’d kept hidden in the back of a drawer for decades. My father had never seen it and they were married for fifty-four years. This keepsake book was one of the few personal possessions she was able to bring with her from Vienna when she and her parents fled Nazi persecution in March 1940. It was filled with inscriptions from childhood friends, relatives, and teachers, and we immediately wondered if those people had survived. It was clear to me that this secret book held a lot of grief and sorrow and also anger. My mother told only a few stories about her childhood. I began thinking about my mother as a ten-year-old in 1938 and the terror she lived through as a child as the family struggled to get to America. War leaves a mark on everyone it touches. There was no one left to tell me everything that had happened, so my research process started as a desire to fill in the spaces in the narrative. I am not an observant Jew, but two traditional questions surfaced: “If not me, then who? If not now, then when?”

C: In reliving-through-writing your mother’s story after her death, how did your relationship with her (since relationships don’t necessarily end with death) change?

J: In so many ways, my research and writing were part of my grieving process. The arc of grief can be long, especially where there are many unanswered questions. I wanted to understand my mother, to know her in ways she couldn’t, or wouldn’t, share during her life. At times I felt like she left me clues to follow. She’d saved all the family paperwork and photographs and sometimes a document or photo would slip out just when I needed to see it. At times it truly felt like a séance. I untangled some mysteries and came to a place of deeper understanding and compassion.

This book reveals how trauma can indeed be passed down through the generations. Do you see a way out of that?

Writing about this time has helped me understand the legacy of war and persecution on generations that follow. I’ve met Bosnians and Serbians who have stories to tell about the genocide of the 1990s and how it carries into the present day. I’ve read about the aftermath of genocide in Rwanda. I’ve read two recent memoirs by Vietnamese refugees still living with the aftermath of the war there. I am not sure what the way out is, but since so many immigrants are fleeing situations of persecution and terror, I hope that there can be more compassion for the plight of people forced to leave their homes.

What was your research like and what surprised you the most?

I am not a trained historian, so I learned on the job. I had help from wonderful historians…What amazed me was how many historians are devoting their working lives to studying not just interwar Jewish culture generally, but specifically the world of Vienna’s Jews. The city in those years was a cultural hub and people migrated there from all over central Europe. I didn’t realize how integrated Jews were in this city, and that despite periods of antisemitism, they felt at home. I’d always wondered why the Jews of Vienna didn’t flee as soon as Hitler rose to power in neighboring Germany. They felt they were safe in Austria, that the hell that had begun in Germany couldn’t possibly reach them. This was the tragedy. A group of people that had given so much—in music, literature, art, theater, science—were negated practically overnight.

C: What’s obsessing you now and why?

Even after years exploring the interwar culture of Jewish life in Vienna, the world of my mother’s childhood, I find that I’m not done yet. There are more stories to tell and I’m searching for them now in my obsessive way.

During this past year I’ve asked friends near and far what has helped them cope with the emotional and physical isolation of this time. Their answers have been so powerful in helping me take care of my mind and body when I just wanted to sit inside and eat chocolate. I’m vaccinated now (thank you science!). What am I most looking forward to? It’s starting to happen. I attended an outdoor art opening in my town. We invited two friends over for dinner and as they came through the door I nearly wept with relief. I will never take these simple human pleasures for granted again.