I recommend the FALLING WOMAN, coming in paperback! It's got airplanes! A crash! A mystery! A stunning debut from Richard Farrell 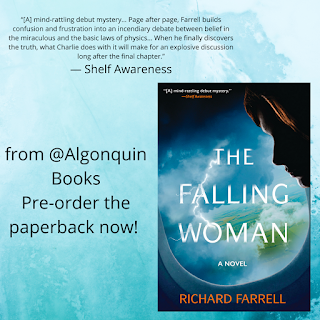 “[A] mind-rattling debut mystery… Page after page, Farrell builds confusion and frustration into an incendiary debate between belief in the miraculous and the basic laws of physics… When he finally discovers the truth, what Charlie does with it will make for an explosive discussion long after the final chapter.”

If you're like me, airplanes terrifying you. You have talismans and you do a whole lot of magic thinking. But if you're also like me, you feel the need to habituate yourself to the fear and turn it into exhilaration. That's the way I felt reading Richard Farrell's astonishing debut, THE FALLING WOMAN, which I think you should pre-order right away. It's coming in paperback from Algonquin Books in May! And that is SOON!

What if you were the sole survivor of a terrible plane crash? And what if you became a media sensation and then you vanished? Only one man knows the truth of your story--and how it could destroy you.

Come on, you know you are dying to read this, right?