Blast from the very, very near past: Steven Rowley talks about his recent and most wonderful novel THE EDITOR, Jackie Kennedy, authentic endings and so much more 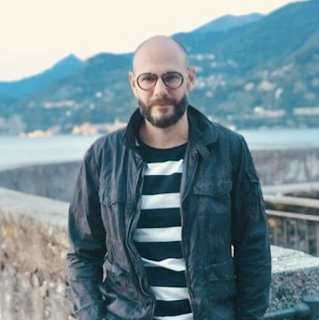 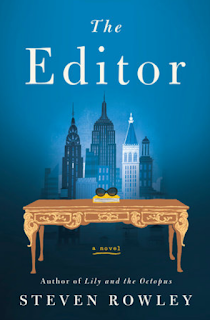 When I was tooling around social media, I saw a post from Steven Rowley mentioning his book THE EDITOR, which I erroneously though was just coming out. I contacted him, he set me straight, and I decided I wanted to interview him anyway--especially after I read and loved the book (and I had read and loved Lily and the Octopus.)

Steven has worked as a freelance writer, newspaper columnist, and screenwriter. Originally from Portland, Maine, he is a graduate of Emerson College. He currently resides in Los Angeles with his boyfriend and their dog.

THE EDITOR is a fabulous novel about a struggling writer who gets a break with the help of...Jackie Kennedy. How can you not love that?  People do! Look at the praise:

“The editor makes James a better writer, and The Editor will make you want to be a better son.”—NPR
“Filled with whimsy and warmth, the Lily and the Octopus author’s second novel centers on the complex relationship between a fledgling writer and his fabulous editor, the latter of whom becomes a mentor, friend, and maternal figure. Oh, and she happens to be Jacqueline Kennedy Onassis, but that’s Mrs. Onassis to you.”—O, The Oprah Magazine
“Steven Rowley is the best-selling author of Lily and the Octopus, and he’s honestly outdone himself with The Editor.”—Cosmopolitan
“[A] delightful slice of historical fiction.”—Entertainment Weekly (“Must List”)
“A sweet and charming novel, perfect for fans of Jackie O and Rowley’s first novel, Lily and the Octopus, alike.”—PopSugar

“A journey of self-discovery…Ultimately a story not about celebrity but about family and forgiveness.”—TIME

Thanks for doing this, Steven!

Your debut Lily and the Octopus was not just delightful, but critically acclaimed. So how scary was it to write The Editor? I always hope that as a writer I can learn new lessons from a finished book, but for me, it never works out that way. Each book is something brand new. How was it for you?

People have asked me how one goes from writing about a dog to writing about one of the most celebrated women in the world – Jacqueline Onassis. I swear in my mind it made sense! (Then again, I’m the one who paired a dog and an octopus in my first book – so admittedly I may be a little off.) THE EDITOR was inspired by my having written a deeply personal autobiographical novel in LILY AND THE OCTOPUS and having it debut with a bigger splash than I had ever imagined. When I first sat down to work on LILY, I was writing to understand the loss of my four-legged friend. I never imagined it would be published, let alone become a national bestseller, or be translated in nineteen languages, or be developed as a feature film. I was writing to work through my own grief. Thus, I made the book as deeply personal as it needed to be for me to heal. Then, through a magical sequence of events, everything I had written privately was suddenly very public. I was motivated to explore the accompanying emotions through another story – this time highly fictional – about a young writer whose small family novel suddenly becomes a big deal and balloons out of his control. For that I needed a catalyst. Years ago I had started another project, a play, about Jacqueline Onassis’s time in publishing, but I could never quite find the proper narrative for it. But it got me thinking, if Jackie Onassis was your editor, wouldn’t that suddenly make your book a big deal? And that’s when I decided to merge the two projects.

I also always think that writers are haunted into writing their books, looking for some answer. What was haunting you?

There are minefields to navigate in telling our stories, in telling the truth about our families and the ones we love. Should you be more loyal to your loved ones? Or to the writing, to the truth. There are also consequences in not telling our stories honestly. THE EDITOR explores both, and hopefully shines a light on truth being the better way forward.

The Editor is about a writer who sells his book to Jackie Kennedy! The research must have been really fun! What surprised you? What did you learn that pulled the plot together?

I did a lot of research to make Jackie an authentic character. From the outset, I didn’t want to just use her, or trade on her name – she had to be a well-rounded character with real narrative purpose. That was something my editor pushed me on draft after draft. However, Jackie’s third act in publishing (which I think is the most interesting time in her life) is the least well documented. By the time she started her publishing career in the late 1970’s, she was done with the spotlight. She kept her head down and did the hard work. There are two great books (William Kuhn’s Reading Jackie and Greg Lawrence’s Jackie as Editor) about her career, so I started there. She only ever gave one interview during her career, to Publisher’s Weekly. I had a very supportive publisher (G.P. Putnam’s Sons) who reached out to many of her co-workers who were generous with their memories. (And several who felt that the reason their relationship with Jackie thrived was that they never spoke about her outside the office and they were gong to continue to honor that to this day, twenty-five years after her death.)  Beyond that, I read a number of books she was working on around the time my book takes place to get a sense of her tastes, her interests, and what her mindset was at the time. I was surprised by her humor, many of the stories I heard were wonderfully funny; she had a droll understanding of how she was perceived.

In my writing life, absolutely. Somehow I’ve become known for crafting these tearjerkers (I swear I’m funny!), so that adds a level of complexity. Particularly with LILY, as many people are afraid of the book or apprehensive about picking it up because they think they how know dog books end. I have to promise them I won’t leave them despondent. That said, I’m always so impressed with the heart’s ability to heal, and people’s capacity for forgiveness. In many cases, endings lead to new beginnings. I love something that Jackie tells her young author in THE EDITOR about writing autobiographical fiction: the story you write ends, but the relationships that inspire it continue. ‘Ending’ can be a word on a sliding scale.

As a reader I’m obsessed with other novels that contain historical figures as central characters, to see how other writers have handled the challenge. As a writer, I’ve been working on THE EDITOR screenplay for director Greg Berlanti and Twentieth Century Fox and getting the details just right for an actress to portray Jackie. As many times as we’ve seen her depicted on screen, it is almost always centered around her time as First Lady or in the context of her marriages; we have yet to see Jackie as a career woman onscreen. Additionally, I have a new novel that will be out in early 2021 that explores my feelings on not having children, and what it means for an artist not to have what is inarguably one of life’s great emotional experiences in their arsenal.

Who should play Jackie in the movie? Sorry. That I’m holding close to my vest. But please reach out with your ideas.