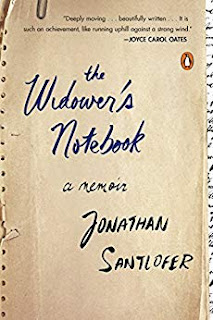 "Wrenching, heartbreaking, intense and emotional - but valuable, too: we're all approaching the age where this will happen to us - or to others because of us - and understanding that it can be dealt with is consoling.  I don't know how Santlofer found the fortitude to write this, but I'm deeply grateful he did. I think the world is a better place with this book in it."—Lee Child, #1 New York Times bestselling author

“The Widower’s Notebook, Jonathan Santlofer’s searingly truthful chronicle of mortality, is, among its wonders, a book about the preciousness of life and love, rendered all the more heart-wrenching, and all the more vital, by a loss almost beyond imagining. It’s a true tragic beauty.”
—Michael Cunningham, Pulitzer Prize winning author of The Hours

“The Widower’s Notebook is a searing rendition of the complex relationship between men and grief—an intense despair that is too often starved for words.  This chronicle of devastation is itself devastating, a deeply powerful and unflinchingly honest report of how painfully and strangely life continues in the wake of a sudden, tragic death.”—Andrew Solomon, National Book Award winner

"The Widower’s Notebook is an intimate, honest, heart-wrenching, and at times even funny account of grieving as well as the memoir of long, satisfying, loving marriage. This is an important and welcome addition to the literature of loss and grief from the male point of view. I will be giving this Notebook to friends reeling from loss but also to old and new couples who need models of how to weather the many little deaths and losses that occur as they journey a life together. Santlofer has given us a brave, beautiful gift, heartfelt and invaluable."
—Julia Alvarez, bestselling author of How the García Girls Lost Their Accents and Saving the World

“Widower is stunning, harrowing, un-put-down-able… Jonathan Santlofer finds language that is immediate and intimate for the irreconcilable trauma of loss. Without pause he captures the shattered time that is grief—this book is fearless, brave for its humanity, honesty, love. Santlofer brings the reader into his heart, sharing all the things that one feels but dares not say aloud, all that one wants to know but can’t ask of themselves, of those around them, of their lost loved one.”—A.M. Homes, author of May We Be Forgiven

"As an extended meditation - not on grief but on grieving - it is direct, unadorned and humane. It is, as well, a rare thing, a portrait of a happy marriage."—Paul Theroux, New York Times bestselling author

"Jonathan Santlofer's book is a miraculous act of seeing, in words and in drawings — of reconstituting, in a work of art, what his wife Joy was like and what their marriage was like and what the loss has been. A riveting memoir of grief, and an indelible portrait of a long and deeply good marriage." —Joan Wickersham, National Book Award finalist and author of The Suicide Index

"A brave book! A truthful and poignant account of an unexpected death filled with wisdom about life and a man's struggle to be allowed to grieve."—Sheila Kohler, author of Once We Were Sisters

“Jonathan Santlofer, with painful honesty, renders real grief in all its sprawl and inconsolable intensity.”—Edmund White, author of A Boy’s Own Story

"Jonathan Santlofer’s stunning The Widower’s Notebook raises all the blinds on immense and sudden loss, bringing light to all its dark corners. In so doing, he offers a deeply moving, often funny, always big-hearted portrait—not just of grief but of a long and rich marriage brought to vivid life, and of a mighty father-and-daughter relationship both tested and enduring. A true gift."—Megan Abbott, bestselling author of You Will Know Me
-

Jonathan Santlofer is a writer and artist. His debut novel, The Death Artist, was an international bestseller, translated into seventeen languages, and is currently in development for screen adaptation. His fourth novel, Anatomy of Fear, won the Nero Award for best novel of 2009. His short stories have appeared in numerous anthologies. He is also the creator and editor of several anthologies including It Occurs to Me That I Am America, a collection of original stories and art. His paintings and drawings are included in many public and private collections.

Thank you so much for being here, Jonathan!


What was the “why now” moment for you to write this brave and moving book?

Thank you for those kind words. I’m not sure there was one specific moment I could point to. For almost two years after my wife’s death I kept notebooks where I documented my days and nights, my interactions with friends and associates, even strangers. The notebooks were for me alone, a way to see clearly at a time when I could not. When I was invited to the arts colony, Yaddo, I thought I would work on a novel I’d started before my wife’s death, but got there and found I was still unable to concentrate on fiction and began transcribing my notebooks. I still didn’t think of it as a book, at least not one I would put into the world. What changed was allowing a few friends to read parts of what I’d written, all of whom were enthusiastic and urged me to consider publishing what I’d written. One writer friend, who I respect tremendously, said “Men do not write these kind of book, so you must continue, must finish.” Still, until the moment I sold the book I kept thinking I’m not going to do this!

So much of The Widower’s Notebook is about how males are supposed to act grieving, which is stoic, quiet, moving on. And which is nonsense.  Can you talk about this please?

I think I fit the male pattern of grieving you describe very well—or did. I rarely if ever let anyone see what I really felt. I hid behind my mask of cool and funny, which in fact made the grieving process that much worse by making me feel isolated. It’s one of the things that eventually spurred me on to write this book—to express what I felt in a culture that doesn’t want to deal with loss and grief and does not expect it from a man. There are cultural stereotypes and expectations about the way women grieve versus the way men do, all ridiculous and equally punishing.

I loved that you binge-watched Netflix. When my mother had a stroke and began the process of dying, I found myself watching horror movies on my computer for hours at a time. Sometimes, I think, we need stories that are nothing like ours, to move forward. But some times, we need stories like yours, which make us feel that we are not alone, that we are all bound by love and loss. Was there ever a point where you felt, no, I can’t continue writing this?

I’m very sorry to hear about your mother. I think losing one’s mother is enormous, and I know my daughter would agree. I also agree that there are times we need distraction – 50 nonstop episodes of Breaking Bad or House of Cards - but there are those other times when we absolutely need to read other people’s experiences of loss for exactly the reason you say – to not feel alone. For well over a year I couldn’t read anything but when I started again all I read were memoirs about loss. I sometimes think a combination of work, friends, Netflix, and Joan Didion saved my life!

There were many times I thought, I can’t keep writing this because it’s too painful. And yet, I know the act of writing helped me move forward. At a certain point I had to step back and look at it as a book, a work on its own, a process that was a bit unnerving—to edit and structure something this personal—but I also felt, If I’m going to do this it had better be good!

Was there a difference in the way art and writing helped you?

I feel lucky that I had my art and writing because they were places to put what I was feeling into something tangible. When you make a drawing you have to coordinate your hand and eye, really concentrate on seeing, so it’s a great escape. I have often recommended learning to draw (and I believe everyone can) to others because it sharpens your mind in a very particular way and makes you see the world differently.
I couldn’t actually escape when I was writing because it was all about what had happened, but there was something about constructing words and sentences—no matter how painful—that felt good and worthwhile.
I firmly believe that work of any kind is a great mechanism to deal with grief. It doesn’t matter what it is—cooking, gardening, painting, learning a language, anything that forces you to focus—because it takes you out of the moment and makes you think about something else. Grieving takes time no matter what, but if you’re doing something at least part of that time moves faster.

What’s obsessing you now and why? (And what are you working on next, too, please)
I just finished the novel I’d started before my wife died. It’s an historical thriller that mixes fact and fiction, something I’ve never done before. It was a difficult but very fun book to write. I’m painting too, and always drawing, which is relaxing for me. Once I finish editing the new novel I want to start another – an idea that’s been percolating in the back of my mind for a while now.
After my wife died I couldn’t work at all so it now feels as if I’m making up for that time. I sometimes think, Oh, just stop, relax and shut up! But I can’t. I’m really only happy when I’m working, and I’ve grown to accept that.

What question didn’t I ask that I should have?
The question I ask myself is: how am I feeling now? The Widower’s Notebook ends at a certain point, but as time goes on I feel more like myself. I’m a somewhat different, altered person than I was before, but I am no longer in the throes of grief and I think people need to hear that: to know that they will survive and feel better, because when you’re deep in grief you can’t imagine ever feeling better, but you will.
Posted by Caroline at 5:44 PM