Eric Beck Rubin talks about his brilliantly unsettling new novel SCHOOL OF VELOCITY, playing piano and so much more. 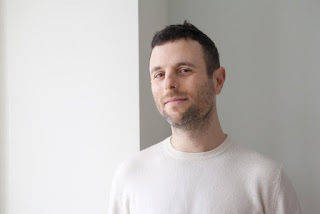 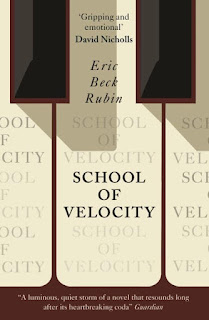 Shortlist, Vine Awards 2017
Shortlist, Kobo Emerging Writer Prize 2017
Finalist, Frank Hegyi Award for Emerging Authors 2017
Guardian/Observer Best Books 2016
Amazon Rising Stars 2016, for Best Debuts
CBC Books Best Canadian Debuts 2016
"A taut novel that builds tension to thriller level" – The Guardian
"Gripping and emotional" – The Observer
"A gut-punching confrontation" – Publishers Weekly
"A storm of a novel that resounds long after its heartbreaking coda" – The Guardian Sunday Review     "A meditation on the impossibility of reliving the past, however much we cling to our memories" – Financial Times

"About deciding, or even knowing, what the people we desire most really mean to us" – LA Review of Books

Writers know writers know writers. I met Eric Beck Rubin through my screenwriting partner and fellow novelist Gina Sorell (If you haven't read Mothers and Other Strangers, what the heck are you waiting for?)  Eric sent me his book, SCHOOL OF VELOCITY and I went crazy for it.

He is a cultural historian who writes on architecture, literature, and psychology. SCHOOL OF VELOCITY is Eric's first foray into fiction, and he is currently at work on a second: a family saga spanning several generations, from pre-World War II Germany to present-day Los Angeles and Western Canada.

I don’t think I’ve ever been so disturbed or unsettled by a novel in years and years. Were you unsettled writing it? Did you know what was going to happen?

Oh, I’m very happy to hear that. I wanted this book to churn up those kinds of feelings in the reader. From my side, though, I wasn’t unsettled while writing. I adopted the narrator’s demeanor: deliberate, reserved, on guard for the surprise that might be around the corner (not that it helps him see what’s coming). As for the ending – I always had a vision of the final scene, and stayed faithful to it. But in one of the later drafts I added something. It took me by surprise, and I figured it would probably do the same for the reader.

What kind of writer are you? Can you tell us about your process?
I learned to write by imitating what I read. I adopted styles and forms from others and gradually the edges softened enough for me to develop something different. The way I see it, fiction closely resembles life, except that while there are no limits to what happens in life, there are limits to what you can put in a novel. So I start by trying to remember as much as possible about ‘what happened’, to take in the full spectrum of life, then shave the corners when pace and plausibility call for it.

I always want to know the why now moment when you felt you absolutely had to write this book. Can you talk about this please?

That I can answer. I was in the Netherlands, at a language school, when a Dutch friend told me to visit his old friend, who was living in the city of Maastricht. All I knew was that the two of them used to be best friends, and this person (in Maastricht) was the one who initiated my friend into music, girls, life, etc. When I went to this person’s apartment, what I saw was a version of my own friend’s apartment, but a pathetic and impoverished one. Bookshelves, but half empty. Art, but poorly framed. A piano, but missing keys. It was like an illustration – or x-ray – of what goes into a best friendship: closeness, competition, striving, failing. It was fascinating, and I didn’t sleep at all that night because I thought I had the heart of a story.

I love all the music material. Are you also a musician, and if not, what was your research like?

I’m an amateur pianist; all I play is classical music, off a sheet, as my ear is terrible. In all the practising I did, though, I learned to love that kind of music, and one of the pleasures of writing School of Velocity was re-acquainting myself with my classical music collection and memories. I also sent the manuscript to a friend who is a professional musician, to get his two cents. As for the other type of music in this book – funk and soul – that was something I was introduced to as a teenager. It still has a strong effect on me – as it would anybody, I think. James Brown, Otis Redding, Percy Sledge, Curtis Mayfield – hello!
(Both sides of the novel’s soundtrack can be heard here: ericbeckrubin.com/the-soundtrack)

The novel is also very cinematic. Do you write with images in your mind?

What you’re getting is the strong impressions that landscapes make on me. In the case of the Netherlands, it’s the perfectly flat fields, the hoarfrost, the fog. It’s all very suggestive – the story emanates from it.

What is obsessing you and why?

If I can go off to the side, what I’m thinking about most right now is form. The story I’m currently writing is in many ways the opposite of School of Velocity: many characters, generations, locations. So how do all these pieces fit together? What does the shape say about the content, and vice-versa? Once again, I’m looking to others to see what they’ve done, and how I might find room in it for something new.

A-ha. There are general questions – can you name some of those authors you admire? There are particular questions – what have you read lately that’s been great? There are questions related to SoV – do you think a true best friendship can outlast the time in which it was formed? Do you think the ‘other side’ of School of Velocity, which is written in first person, will ever be told? But I’m not feeling short-changed.