Abbi Waxman talks about grief being like ugly furniture you can't get rid of, hope, gardening, and her great new novel THE GARDEN OF SMALL BEGINNINGS 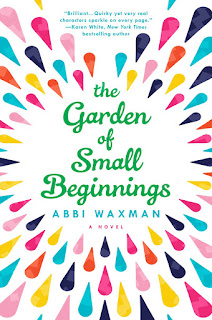 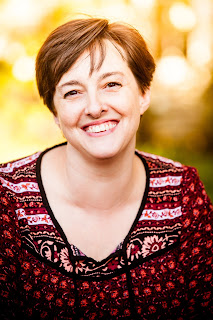 It’s been more than three years since my husband died, yet in many ways he’s more useful than ever. True, he’s not around to take out the trash, but he’s great to bitch at while I’m doing it myself, and he’s generally excellent company, invisibility notwithstanding. And as someone to blame he’s unparalleled, because he isn’t there to contradict me, on account of being cremated.

Thank you so much for being here, Abbi!

I always want to know what is haunting an author enough for them to spend year(s) writing a novel. What was it for you?
A desperate need to get out of the house. Otherwise I might have had to clean it, and I really hate cleaning.

I love the title, The Garden of Small Beginnings, because I think so much that is difficult about life can be managed if you start small--and that word (and world) of the garden, was just so fantastic. Can you talk about this please?
I am an utter failure as a gardener. I once – and I stress once – successfully grew a small patch of vegetables. Tomatoes, green beans, English peas… I was a goddess of the summer for one season. Never again, despite repeated attempts. I wanted to create a character who was better at most things than I was, thus the gardening. It was aspirational. And I wanted to kill off my husband at the time, so I made her a widow. All writing is wish fulfillment, let’s face it.

I also was enamored of Lillian, a now single mom of two kids--which makes this the perfect Mother’s Day Gift, by the way. What do you want readers to come away having learned about mothering? (And self-mothering.)
That children are hilarious and irritating and wonderful and dreadful and short. And that you should put your own oxygen mask on first, and then attend to those around you.

I loved your explorations of grief, which felt so true to me (wish I didn’t know that, but I do),  What is the major thing people get wrong about grief?
That it goes away. It doesn’t. It just solidifies like an ugly piece of furniture you inherited and therefore can’t throw away.

What’s obsessing you now and why?
Teenagers. Because I have two and am about to have a third, and because everything I thought I knew about parenting just became utterly useless. Fantastic.  What question didn’t I ask that I should have?
If I knew who was going to win the Superbowl next year. I don’t, but just think if I did and you’d asked, we could have made a fortune! Never mind.
Posted by Caroline at 12:28 PM