A sinister noir about friends, mothers, art, danger. Come on, you know you need to get Edan Lepucki's Woman No. 17 RIGHT NOW. 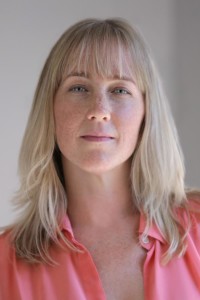 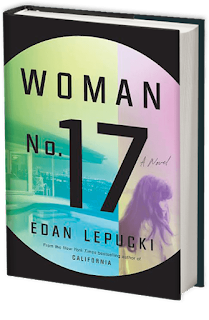 For me, the most wonderful thing of all about Edan Lepucki is not just her exquisite writing. It's that another writer gave her a shout-out on Stephen Colbert and she was on the show! How cool is that?  Edan and Stephen Colbert are now besties.

She's the author of the novella If You’re Not Yet Like Me and the novel California, which debuted at #3 on the New York Times Bestsellers List and has been the #1 bestseller on the Los Angeles Times and San Francisco Chronicle bestsellers lists.  It’s also been on the IndieBound and Publishers Weekly Bestsellers Lists. California was a fall 2014 selection of Barnes & Noble’s Discover Great New Writers program.

I'm so jazzed to have her here. Thanks for coming on, Edan!

I always want to know what is haunting a writer so he or she is absolutely compelled to write the next novel. What was it for you?

Looking at my two novels, I can say that, as a writer, I’m haunted by how familial relationships shape and influence us. How are you changed by your parents? How has becoming a mother changed you—and what effects have you had on your child? I am obsessed with these questions. I’m also interested in intimacy: what it is, how it feels, and the various beautiful, silly, damaging and profound ways we reveal ourselves to others (or don’t). I’m interested in how a connection between two people grows stronger…or frays. I am also haunted by my hometown of Los Angeles, which is such a mysterious, strange, ugly-and-beautiful place. In Woman No. 17, I was particularly interested in writing about the impersonal yet stunning Hollywood Hills, with its affluent residents, its constant home construction, its eerie coyotes, and all that might be going on behind closed doors. I wanted to write primarily about women, and I wanted them to make bad decisions. I think I will always be compelled to write about complicated women—that is: women, period.

You had such an almost surreal success with California, being on Stephen Colbert—did that impact your writing of your second novel at all? Did it make you feel more confident or more terrified?

I started working on Woman No. 17 a year before California was published, which meant I had about 100 pages before the whole Colbert adventure began.  I am so happy that was the case because it meant the book could be whatever it wanted to be; it had its own story, character, voice, and style…and it was all unrelated to the exciting and, yes, surreal success of California. And because I was already underway with Woman No. 17, my writing process didn’t really change: I wasn’t daunted…and I wasn’t super confident, either. (Or, I was in equal parts, as with any writing project.) The only real difference is that I’m writing to you now from my splendid writing throne, made of solid gold and encrusted with diamonds, which they issue to every writer upon being named a New York Times bestseller. You use yours too, right, Caroline?

For me, every novel feels like I’m learning all over again how to write. How did writing Woman No. 17 (and thank you so much for not putting “Girl” in the title!) differ in the nuts and bolts writing process for you?

First, thanks for thanking me for the title! I didn’t intend for the book to be a commentary on all the books with “girl” in the title, but once it was about to be in the world, I realized it was meaningful to tell a story about adult women—and name them as such. And Lady in particular is no girl. She is 41 and the mother of two children, one of whom she raised by herself, and she's wrestling with all that's happened to her. In some ways she's too much a veteran of life to be called a girl. Too much has happened to her.
But I digress…

Woman No. 17 was different from my previous projects because I had two first-person narrators to juggle. I wanted their voices to be distinct, but I also wanted, as the book progresses, for their narratives to echo and mirror one another, and for them to even occasionally blur together in the reader’s mind. The doubling began early on, in that magical-accidental fiction writing way: I wrote a passage about how Lady’s real name was Pearl…and then, when I switched to Esther for the first time,  she was renaming herself S. So, right away, I had two narrators using different names. Much of the writing process was following those little leads, turning up that twinning energy.

Another new and challenging element was the character Seth, Lady’s teenage who gets involved with S. He doesn’t speak and his disability is central to Lady’s relationship with him. I didn’t want to deny the reality of his mutism, as I think such a disability would have a strong impact on one’s life and relationships, but I also wanted to make sure he was a multi-dimensional character with humanity and desires. I was interested in showing how Lady and S dealt with his disability, and I also hoped the reader would see around these narrators to consider how Seth would want to be represented and treated, on his own terms. Is he as they see him? On a nuts-and-bolts level, it was often very difficult writing dialogue scenes when one character doesn’t say anything!

There’s so much about life and art in this novel, that I want to ask where does any artist draw the line, and should they? Is everything available to be made into art or should we respect boundaries? Does art imitate life or is it the other way around?

These big questions can sustain many contradictory answers, from, “Art is art and must be made, no matter who it offends or what relationships it destroys,” to, “Art is not as important as the people you love.”  For me there is certainly a middle ground; I am lucky to have a family and a partner who are supportive of whatever stories I need to tell, but I also try to respectful of privacy and feelings. I think everyone’s glad I don’t write memoir!  I loved writing S because her youth gives her a certain recklessness as far as her art-making. She is beholden to no one…or so she foolishly thinks.

As for the other question, sometimes I believe art—narrative art, at least—is simply a clumsy stumble to capture those ineffable moments of life; other times, it feels like we consume so much narrative that we understand ourselves as narrators, as characters in stories. Put in some earbuds and there’s a soundtrack, too. What does that do to us, this delightful, illusory, dangerous sense of control, of symmetry, of cause-and-effect?

I’m so curious about how your being a mother influenced your writing about mothers and children? What surprised you? I know I always worried I’d be less creative with children—and instead, I feel like I am more, more, more.

The fact that I’m a mother means that parenting and children are a central theme and subject matter for me—at least, right now, as I’m in the thick of it, with two kids ages 5 and 1. As I said in your first question, I’m haunted by familial relationships, and I’m just fascinated by parenting: the difficulty of it, the sacrifices it requires, how it provides intense moments of joy and beauty—but also, wow, how boring it can be, too. I’m interested in how it can simultaneously return you to your body, and also alienate you from that body. I’m interested in how the relationship adjusts as the child ages—how you see them anew as they mature, and how you come into focus for them, again and again. All of it has surprised me. Man, it’s just such a complicated and beautiful relationship, perfect for fiction!

I haven’t slept through the night in over a year, so I often can’t think of very simple words. I’ll say “pergola” when I mean “pillow” for instance. But aside from this (temporary!) mental slowness, I’d say that, yes, yes, motherhood has made me more creative. I’ve written more as a mother than I did before I was one. It’s also taught me the value of uninterrupted writing time. I try my best not to squander it.

The same-old, same-old: families, mothering, Los Angeles. But also: alternative therapies and the quest to be happy and well; a commune; a weird, hidden estate; a possibly magical baby. It’s too early to say anything more.

I’m also obsessed with Jane Smiley’s Last Hundred Years Trilogy (I’m currently on book two), my dry eyelids that won’t stop being all red and flakey no matter how many fancy creams I slather on, and buying a new living room rug.

There’s a lot of drinking in Woman No. 17, so you should ask me for a cocktail recipe. I’ll leave you with a link to Esquire’s recipe for a Sidecar, which is one of my favorite weekend-night drinks. I like to make one and watch “Insterstellar” and then weep over my growing children in this too-short life.