My rapturous mini-review of Skip Horack's masterpiece, The Other Joseph--and you get to hear Skip talk about skiffs, oil rigs, writing, and so much more 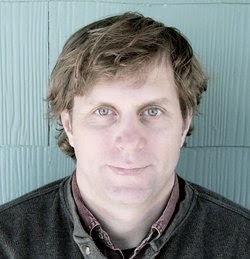 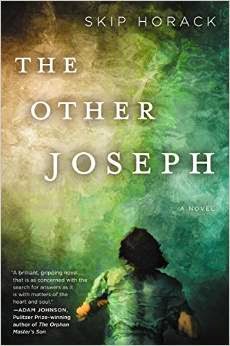 I absolutely was enthralled by this novel, The Other Joseph, by Skip Horack. I just loved it.  It does what the best novels do--it makes you think about the world, and family, and legacy, differently. It changes you. About lost brothers--and lost selves--about oil rigs and Russian mail order brides, and the disconnection of love, it's one of the most masterful and haunting novels I've read all year. I'm honored to host Skip here.

I always want to know what sparks a particular novel, what were you trying to discover in writing it? And what surprised you instead?

“Sparks” is a really good way to describe how it is typically some tiny flame of inspiration or interest that compels me to attack any new story or novel, as there’s usually not much more in my head going in than some small, private excitement or imagined situation. And then I get writing—and, as years pass, trying to recall what that genesis flicker might have been becomes more and more difficult for me. And that certainly applies to The Other Joseph. I know I was living in San Francisco at the time, a fish-out-water Southerner, so an exploration of that displacement was certainly an initial attraction I had. And the work of finding compelling reasons to get my main character—Roy Joseph, a somewhat reclusive Gulf of Mexico oil rig worker—from Louisiana to San Francisco led to the piece-by-piece construction of the novel’s plot. And because I work that way, without a blueprint, problem-solving as I go, dreaming up unpredictable yet believable ways to write myself out of whatever corner I’ve written myself into, there winds up being very little that doesn’t surprise me during the creation of a book.

Right from the opening pages, your novel structure is fearless.  Instead of being a novel about Roy looking for his mysteriously dead brother’s daughter, it becomes a kind of circular journey, where Tommy is also searching for Roy.  Both brothers are gone to each other, yet they communicate to each other. Go, they say. Speak. Tommy is actually telling Roy’s story from the journal he found, which give his brother life.  How and why did you decide to structure the novel like this?

The decision to bookend Roy’s narrative with a foreword and afterword from Tommy came very, very late in the game. In previous drafts, Tommy was a completely absent character remembered only in flashbacks—a revered ghost who haunted the novel, basically. And I suppose in the end I just couldn’t resist the urge to give him a voice . . . and also to let him speak on how much Roy meant to him. Originally, Roy—kid brother to lost Navy SEAL hero Tommy—was solidly the “other” Joseph in my eyes, stature-wise, but then I came to realize that the manuscript I’d written was as much of a tribute to him as it was to Tommy. So it is with brothers, and by adding those aforementioned Tommy sections I hope I was able to help drive that idea home some.

So many of the details, especially about oil rigs, are so vivid. What was your research like?

I really enjoy the research aspect of fiction writing, and plenty of that was necessary for this book. Particularly with regard to the oil industry and military features of the novel. Being from south Louisiana, I have a pretty good, albeit mostly superficial, knowledge of the former—but I also have quite a few friends and contacts with much more direct ties to that world, so I was sure to lean on them. As for the novel’s military aspects, I’m fortunate to have a retired (and patient) Navy SEAL cousin who spent more time answering my questions and steering me straight than I had any right to ask of him. And then there was all the traveling and wandering necessary to create an authentic and memorable sense of place, visiting and revisiting the novel’s various settings as I attempted to view them through the lens of my narrative. Finally, of course: so many books, articles, etc., and so many websites. What a gift that us fiction writers don’t have to keep tabs for a bibliography.

What I so deeply admire about this novel is the way that grief soaks every page, but so does hope, and the power of imagination.  The truths we expect are not the ones we are given, and nothing is like it appears.  We are all haunted, but perhaps, just for a moment, a light can be turned on in the darkness. So much is lost in this extraordinary novel, but there are glints of things that might be found.  Can you talk more about this please?

Wow, I just want to keep reading the question! I really appreciate those kind words, here and throughout, and I’d love to think that—despite the sad and tragic aspects of the novel—readers won’t read The Other Joseph as pessimistic or nihilistic in its worldview. To quote one of the characters in the book: “Triumph without struggle means nothing.” And regardless of outcome, I’ve always seen much to celebrate in the way our ability to hope, and even the power of our imaginations, can help us fight that fight.

I always want to know about craft. What kind of writer are you? Do you plan things out or wait for that pesky muse?

As I touched on earlier, in the beginning I don’t create from an outline—though as the draft progresses I’m certainly always on the lookout for scenes or moments to write toward. Which isn’t to say that I wait around for a muse to sing me to work either . . . more like I sit down at a computer every morning and don’t let myself quit until I’ve hit whatever particular word-count goal I have for the day. The only thing I have a pretty good sense of at the outset is approximately how long I want the book to be, as anticipating that helps me with the plotting and pacing of things. And as always when I’m speaking of my process, please note that this is just how I do things. I know many good writers who work very, very differently.

I bought a little skiff not so long ago, nothing special, but as spring arrives in northern Florida I’ve been having a ball exploring all the rivers around here. Waters have always captured my imagination—that’s pretty obvious from the novel, actually—and after several years of being boat-less it’s been fantastic getting to pour over maps and scratch that itch again.
What question didn’t I ask that I should have?

First off, thank you for all of these questions. I’m such an admirer of your work, so it means so much to me that you enjoyed the book. Now, I can’t think of a question you should have asked—but I’d love to suggest that you check out a debut story collection by a friend of mine: Molly Antopol’s The UnAmericans. When I read her book last year I was reminded quite a bit of your wonderful novel Is This Tomorrow, so I definitely recommend her to you and your fans.