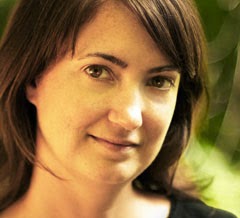 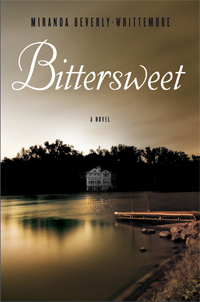 Come on, who hasn't read and worshipped BITTERSWEET, Miranda Beverly-Whittemore's astonishing New York Times bestseller about outsiders and class. She's also the author of The Effects of Light, and Set Me Free, which one the Janet Heidinger Kafka Prize for the best book of fiction by an American woman published in 2007. She's also the winner of the Crazyhorse Fiction Prize, and I'm so honored to host her here. Thank you so much, Miranda.

What I loved so much about Bittersweet was that you melded both a Gatsbyish sense of the outsider yearning to be inside a rarified world, and also an encroaching tension and menace that had me gripping some pages so tightly, I almost tore them. So I want to ask, how did this novel spark

Oh thank you so much! Long before I started to think about Bittersweet in a concrete way, probably long before I started writing books at all, I fell in love with a certain kind of book, and, as I started to read more widely, I realized that every time I read a book with the same thematic premise—an outsider longing to get “in”—I felt a kind of electric recognition. I found myself obsessed with/ in love with this central notion, and the push/pull of wanting the outsider desperately to get in while also knowing they’re going to have to pay for belonging. I’m talking about books like The Great Gatsby; The Line of Beauty; Brideshead Revisited; Atonement; The Emporer’s Children; The Secret History. Perhaps you’ll notice that in all those books, the outsider is a young man, so I suppose I believed that I might have something new to add to the genre with the creation of Mabel Dagmar.

Because I usually come at novels from a few different angles, and all angles to sing for me in order to want to actually write the damn thing, I also knew that I wanted to write about the place where this book is set, which is a real place I’ve been going to my whole life and love with all my heart. It’s funny to me that I could turn such a benign spot into something out of a dark fairy tale, but it’s true that the sense of menace the book might hold didn’t become clear to me until I realized that’s where this story was set.

Because this novel is so artfully constructed, I want to ask, was there ever a moment when you had no idea what you were doing, or you worried that you had lost control of it?

I find that no matter how well planned or plotted a book is, there is always that moment when it turns into a growling monster above me and I wonder what I’ve wrought. I didn’t set out to write a “thriller” per se, and at first, the book kept crawling into that territory. Once I relaxed a bit and stopped trying to reel it back in, I allowed myself to understand that that thriller aspect of the book was a strength, and not something to fight against.

What do you think writing this novel taught you?

I come from a literary fiction background, which means I’ve always felt pretty self-conscious about my propensity for big plot. Because I’d had a hard time selling a couple of books before I wrote this one, I was feeling a bit more adventurous (…or desperate), and I realized that I wanted to try my hand at writing a book with polished sentences that also went for it in terms of plot. I decided to embrace the idea that my next novel could be both commercial and literary, and in doing so, adopted the belief that there was someone out there who would want to (and know how to) market and sell a book with both elements in it.

I suppose that in embracing my strengths as a novelist (and not feeling as though I had to kind of downplay them anymore in order to be “cool”), I remembered how much fun it can be to write a book. I know that’s not really cool to say either—we love the idea that writing a book is all blood and guts (and certainly, there were real wrestling matches I had with Bittersweet)—but I’ll be honest that for the most part, writing this book was a real pleasure. A friend of mine said that she felt like she could hear me laughing as she read, and that made me so happy to hear. I loved reconnecting with that pleasure principle, and I think readers are as well.

Without giving anything away, I want to comment on the brilliant fast forward at the end.  At what point did you know you were going to structure the novel that way?

I always knew this tale was being told from a great distance. The space between the immediacy of the action and the telling of it was how I came to know who Mabel was, because so much of this novel operates based on how she chooses to present the facts.

That said, the ending has changed a lot; this is the third version of that “fast forward” ending. The first version was much more dystopian, and my agent encouraged me to rethink it before we sent it out. So then I went back to the drawing board and ended up with something close to what we have now, but—without giving anything away—the ending was much less satisfying. I owe my editor for being the one who pointed this out, and all before she became my editor, after she’d spent about 12 hours with the book. She contacted my agent that she loved the novel and had dreamed about the setting the previous night, but that she disagreed with my ending, and would be willing to take another look at the book if I wanted to revise. So I spent the next two days rewriting the last fifteen pages or so. Up until that point, the ending had never felt quite right to me, even though I knew that tonally it wanted to be told from a fast forward. Once I got Christine’s notes, not only did I know that she had to be my editor, but I realized I’d finally discovered how to end this book.

Because I had such a hard time selling another book after my second novel, Set Me Free, was published in 2007, I promised myself that if/when I sold another book, I’d devote myself for a year to the cause of getting the word out about it. I had a clear sense that Bittersweet might be my “last chance” and I didn’t want to squander it. There have been many upsides to that decision, but that downside of it, of course, is that I’ve had to take a major break from writing in a daily way in order to do all the social media and outreach I’ve agreed to. I’m thrilled that I just sold my next novel, JUNE, and will be writing it over the course of the next year, and it’ll be interesting to see what the shift back into daily writing will be like. My family life will change too, because for the first time since my son was born five years ago, he’ll be in school five days a week. I’m looking forward to hunkering down back into language and closing down the social channels I’ve opened up this past year, or at least putting them on pause for a bit.

I’ve been working a lot on being in the moment. Maybe it has something to do with finding myself, all of a sudden, with a kindergartener. It just seems like time is slipping by so quickly, so I’m putting down the smartphone and computer and spending time playing or talking with the kiddo, appreciating the parts of the world, and people in it, that I’m lucky to know and love. I’m also on a declutter kick, obsessing about getting things out of my house. That’s something else that happens when you have a kindergartener: you realize you have accumulated a LOT of crap.

I always love to hear about what a writer loves that has nothing to do with writing. So my answer to that question is: cooking (I’m a big fan of starting with a recipe and then diverging from it halfway through); sleeping (I can sleep nine or ten hours a night if my schedule allows); being with my family (I loathe that we are spread out so far across the planet); and singing off key to musical theater (latest fave: Matilda.)
Posted by Caroline at 10:32 AM