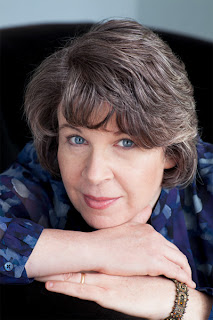 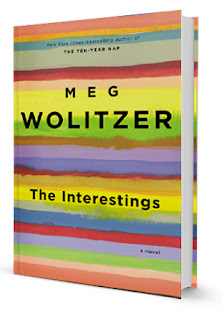 I'm so honored to have one of my literary heroines here, today, Meg Wolitzer. Meg is not only a brilliant writer, she's also one of the most generous people on the planet. Soft-spoken, incredibly smart (and, just so you know, I also deeply admire and like her literary mother, Hilma, too), Meg hasn't just achieved huge success for herself, she fights for it for other writers .

Her new novel, The Interestings gets at the thorny, provocative questions, any artist thinks about. How do they keep it growing, and what happens when it gets stunted? Those are just some of the provocative questions raised in Meg Wolitzer's extraordinary novel, The Interestings. Her other novels include The Uncoupling: The Ten-year Nap, The Position, The Wife, a novel for young readers, The Fingertips of Duncan Dorfman. Her short fiction has appeared in The Best American Short Stories and the Pushcart Prize. She'll be a guest artist in the Princeton Atelier program at Princeton University, along with singer-songwriter Suzzy Roche. I'm so thrilled to have her here. Thank you so, so much, Meg.


The whole issue of fame is always a queasy one. I've heard the argument that "talent will out," that it's not a question of luck or timing, but I'm not so sure I believe that totally. Can you talk about that, please?

I suppose it's true that talent will often out, but "out" has its degrees. You can be known among your group of friends as a stellar artist, for instance, or only among other artists, or else you can have a far bigger, more mainstream following than that. I think luck and timing can really be a big part of the equation. Also, what makes someone's career take off in a major way often has to do with zeitgeist issues. An artist's success can be connected to the ways in which he or she intersects with the cultural moment.


So much of The Interestings is about how talent evolves or sustains. You published the wonderful Sleepwalking while still an undergraduate and you've built a stellar career, and gotten more brilliant with every book. Was there anything in particular (besides talent, of course) that helped you craft such a stellar career and keep growing and evolving? Were there ever moments when you despaired or doubted?

Thank you for those kind words about my work. Many things were helpful along the way, but I would say that chief among them was (and is) a supportive mother (more about her a little later) and a wonderful pack of writer friends. My friends and I have always helped one another make certain hard craft decisions in manuscripts, and we've provided publishing advice too, and dark-of-night insecurity-reduction services. Because writing is solitary, it's easy to second-guess oneself, and, left to one's own devices, to feel crushingly bad about a small, perceived slight or a large, public one. Good friends help you take the long view.

As for desires for fame and attention, they are certainly often at their strongest when you're young. They seem so important then, and you're often taking your own pulse based on what others think of you, which is generally an unhealthy way to live. My first editor always said, "Writing isn't a horse race." And this is really good advice to try and remember.

I doubt myself with real frequency, of course, though by the time I hand a book lately, I tend to feel more and more comfortable with my writing decisions.

The envy and despair your characters feel as they watch others grab the prizes of success they are dreaming for felt so real and palpable. Can you talk about how our desires for fame/acclaim/attention change as we age?

Issues of success and attention don't matter in the same way to me that they used to when I was in my twenties and had dreams about what a writing life would entail. Of course I want people to read my novels, and I hope to continue earning a living as a writer, but I see it differently now. First of all, book culture is really changed from when I first started publishing in the 1980s. Back then, people would gather and talk excitedly about, say, an Ann Beattie story in "The New Yorker." You felt that the kind of fiction you liked was a real part of the culture. And now you know that for the most part, fiction is read by a very narrow slice of society. So it's incredibly great when something wonderful breaks through without an obvious hook or reason. But it's not the norm. Most of the writers I know who used to care more about getting attention now seem to focus on finding uninterrupted time to work. Also, they may care less about being well-known and more about having money security--though those two aren't unconnected. But money security frees you up from money anxiety, which is a real writing killer.

I wanted to ask about your incredible essay in the NYT, On The Rules for LIterary Fiction for Men and Women, particularly the odious term "women's fiction" which always, to me, seems to damn a book before it is even out of the gate. What do you think readers and writers can do to start changing these rules, besides talking about them?

You can certainly have a look at your book jacket before it's final and see whether you feel it accurately represents the book and who you are as a writer. You can see that your agent and publisher are sending your books to the people you wish would read them. You can become involved with the organization VIDA, which compiles important gender-breakdown statistics about the publishing industry. And you can, of course, write the books you want to write, not the ones you think you should write.

What's your writing life like? Do you have rituals you need? Do you map things out or do you tend to let the characters lead you?

I work all the time. It's not a fixed routine, but it tends to be pretty constant. I guess I'm sharpest in the early part of the day, and I get dull as the light drain. I love to work, I love to be deep in a book; this is the happiest time I can imagine. I work at home, or in coffee shops, or at The New York Society Library. I don't have rituals, exactly, though I do drink copious amounts of Ito-En green white tea (iced) all day when I'm working, and I even have it delivered so I don't run out.

As for the novels, I usually start with an idea, and the characters seem to fall into line fairly soon afterward. "The Interestings" was a big "character" novel for me, but I never lost sight of the fact that I wanted to write about what happens to talent over time. I tend to let myself write freely for about eighty pages, and then I start to look back at what I've done and see if it's any good or if it needs to be put out of its misery.

Your mother, Hilma Wolitzer, is also an acclaimed writer. Did you know, like your characters, early on, that you were going to follow in her career footsteps? What was that whole experience like?

In addition to my friends, she is an enormous positive influence in my writing life. She was always supportive of my work from the start. Plus, she's so talented, and I loved having a talented mother when I was growing up. I wanted to be a writer from the time I was very young, and through her I saw a writer's life in action, up close. It's been a great gift, seeing how hard it can be, and how rewarding.

Oh, I'm always obsessed with the next thing: how to nail it down and love it and stick with it. It's really hard to switch from one book to another. I guess all novelists are serial monogamists (did I read that line somewhere? Maybe, maybe not...), and this can be difficult.

I can't think of any. You are very thorough and thoughtful, which is no surprise, since your fiction is too.
Posted by Caroline at 5:22 AM

Great interview! Two great gift gals in one place at the same time = heaven! Thank you!

This is my blog on how Great Films Could Have Been Made Differently.

if you have time then please take a look.

I'm also looking to collaborate with a screenwriter.

Superb interview, thanks to both of you of saying what needs to be said...

Enjoyed reading this! I love Hilma and Meg Wolitzers' books.