Chris Bohjalian talks about The Sandcastle Girls, the Armenian genocide, why the biking season is so short, and so much more 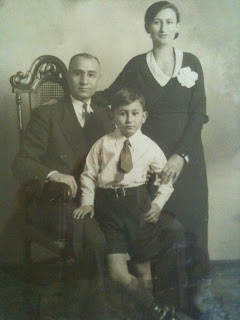 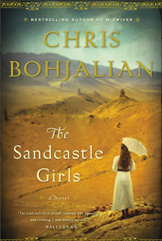 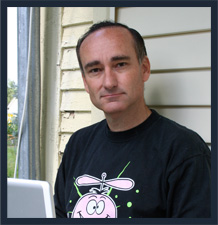 The truth is, I adore Chris Bohjalian. Not just because he writes such wonderful novels, but because you honestly have never met a funnier, kinder, more generous writer on the planet. He shared a stage with me at Rainy Day Books (How generous was that to share his huge audience with me? And you have to see him throw out t-shirts to audience members if they can answer correctly: Which book has more pages, his or War and Peace?), and despite his huge fame, he remains so down-to-earth, you could grab him for cupcakes and tea. His new novel, the Sandcastle Girls (out July 17th) is extraordinary. Of course it's beautifully written, but the subject matter, the near extermination of the Armenian people, is told in a way that is both deeply personal and monumentally moving. Raves Kirkus in a starred review, "An unforgettable exposition of the still too-little-known facts of the Armenian genocide and it's multigenerational consequences." Publisher's Weekly said, "His storytelling makes this a beautiful, frightening, and unforgettable read."  And Library Journal urges, "Not to be missed. Simply astounding."

The photo above is of Chris and his parents, by the way.

I'm so thrilled to have Chris here. Thank you, thank you, Chris.

Critics are calling The Sandcastle Girls the most ambitious and personal novel of your career. What was so different about the writing of this book?

In 1915, there were roughly two million Armenians living in the Ottoman Empire. By the end of First World War, all but 500,000 would be dead: Either executed by Turkish gendarmes and soldiers, massacred by neighbors, or marched into the unforgiving Syrian desert to die slowly of dehydration, starvation, exhaustion, and dysentery.

My family's history parallels the slaughter all too perfectly. I had four Armenian great-grandparents alive in 1915: All but one would be killed.

On my  cell phone I have some family photos, including the oldest family photo we have. It's a formal portrait with eight people in it, taken somewhere in or near Constantinople just before the turn of the last century. My grandfather, Leo Bohjalian, is a toddler sitting on his father's lap. And my aunt wrote about him on the back of the image, "Levon Nazareth Bohjalian, only family member to escape Turkey for Egypt."

I know in my heart that this is the most important novel I will ever write.

The novel says a lot about what it means to rediscover our heritage, and how the past is imprinted upon the present. Could you talk a little about that?

Okay, another story about another photo -- again, one I carry with me on my iPhone. It's my father as a five-year-old boy in 1933 or 1934, surrounded by his parents -- my grandparents. It was taken in Manhattan or a suburb of Manhattan. My father is wearing short pants and a white shirt with a tie.  My grandmother is wearing a beautiful dark dress with a white collar and a corsage the size of a softball. My grandfather is wearing a suit. (Until he was a very, very old man, I never saw him in anything but a suit. As my aunt once said, laughing, sometimes he would be wearing only a vest or a white dress shirt when he was cleaning the oil burner or trimming the hedges.)
In that photo I see wisps of the exotic house in a Westchester suburb in which my father was raised: The plush Oriental carpets, my grandmother's intricate Armenian lacework and doilies, and bookshelves packed with books in a language -- an alphabet -- I could not begin to decipher. My father didn't speak a word of English when he started kindergarten.
But in my grandmother, I see my daughter. In that five-year-old boy, I see the man who raised me.
My father was at the end of his life when I was writing this novel, and those sorts of photos were the ways we would pass the time when I would visit -- and how, finally, he would share with me bits and pieces of his childhood.

Why do you think the horrific genocide of 1915 (“The Slaughter You Know Next to Nothing About”) isn’t better known?

I think there are a variety of reasons: A principal one is that the post-War Ataturk Government wanted to be perceived as a modern, Western democracy. It didn't want to be saddled with the sort of barbarism that was involved with what Raphael Lemkin christened "genocide." And while news cycles moved more slowly in the 1920s than they do now, they did move.

And people's memories are short.

Moreover, there are two differences between the Armenian Genocide and the Holocaust.

First, the Holocaust occurred smack in the middle of Western Europe and the Ukraine. You can't murder six million people from the Seine to the Volga without a lot of witnesses. The Armenians were slaughtered in eastern Turkey and the Syrian desert. As my fictional narrator asks rhetorically in The Sandcastle Girls, "How do you kill a million and a half people with nobody knowing? You kill them in the middle of nowhere."

Second, there is the issue of recognition. A few years ago, I heard the incredibly inspiring Gerda Weissmann Klein speak at the University of Texas Hillel. Gerda is a Holocaust Survivor and the author of (among other books) All But My Life. Someone asked her, “What do you say to people who deny the Holocaust?"

She shrugged and said simply, “I tell them to ask Germany what happened. Germany doesn’t deny it."

As Armenians, we have a Genocide in which fully three-quarters of the Armenians living in the Ottoman Empire were killed and yet it remains unrecognized by Turkey and its allies.

I think that’s why we are hungry for novels that tell our story – and that tell the world what our ancestors endured a century ago.

I deeply admired the structure of the novel. Did you have this plan in mind when you started or did it evolve?

First of all, thank you.

Yes, I  did have this plan in mind when I started the novel.

As an Armenian-American and the grandson of survivors, I knew this was going to be a deeply personal story – in some ways, the most personal story I had ever written. (When I was at the Genocide Memorial in Yerevan recently or standing before the bones from Der-el-Zor in the Genocide Chapel in Beirut, all I had to do was glance at the old family photos on my iPhone to know why this book mattered so much to me.)

Consequently, I decided to begin with family history – with a moment that would allow me to walk slowly from the light of the present into the shadows of the past. I created a female version of myself: An Armenian-American novelist at mid-life named Laura Petrosian, who has thought far too little about her ancestry and why she is who she is. Her childhood was, in some ways, a reflection of mine with merely the gender pronouns reversed. To wit, her first boyfriend in Miami, Florida was Turkish, just as my first girlfriend was.
Now, her grandparents in the novel are not my grandparents, but I hope their fictional experiences are compelling drama and illuminate what my narrator christens “The Slaughter You Know Next to Nothing About.”
The result is a book that moves back and forth in time, between Laura’s present and her grandparents’ past. The structure allows readers to catch their breath. Me, too. We can all escape for a little while from the searing desert sun; we can reflect on our own family histories; and, yes, we can watch a child – in this case, Laura – grow up in an atmosphere a far cry from the inferno of the Armenian Genocide..

The Sandcastle Girls is your 15th novel. You’re amazing prolific. So, When you start a book, do you ever worry, what if I can’t think of anything else to write about? (This is said very tongue in cheek.)

I always find things to worry about.  Always.  Now, thank you very much, I will add writer's block to the list!
What’s obsessing you now?  What question didn’t I ask that I should have?

What's obsessing me right now?  Why is "Mad Men" only thirteen episodes?  Why isn't the biking season longer in Vermont? When is Caroline Leavitt going to gift us with another wonderful novel?

Oh Caroline, thank you so much for sharing this talk you had with Chris Bohjalian. I am in the middle of The Sandcastle Girls right now, and loving every word and page. I've cried and smiled and I continue to be amazed at what I'm learning and feeling as I read this story. Yes it is brilliantly written and the story is so personal the reader feels so drawn in.
And yes....we all wait for your next book Caroline!! If anyone finds out what is up with just 13 episodes of Mad Men, clue me in!!

It is a nice information to share about the Chris Bohjalian talks about the sandcastle girls. I loved the story and i am congrats my friend who is currently planning his wedding using the wedding planner mobile app. Thanks for sharing the information.

Thank you for this wonderful interview. I can't wait to read this novel! I have so much to learn.