Margaret Dilloway talks about The Care and Handling of Roses with Thorns, outlining, samurai women, and so much more 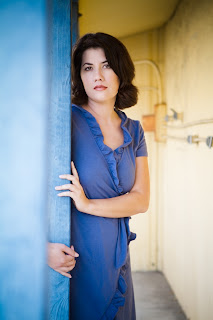 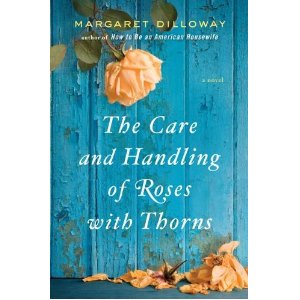 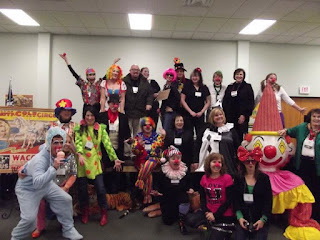 See the photo above this text? That's Margaret Dilloway clowning it up at the Pulpwood Queens Girlfriend Weekend (yes, I'm afraid that is me in the clown dress and pigtails and red boots in front, standing by author Victoria Zackheim and Wade Rouse!) Her first novel How To Be An American Housewife, was stellar, and her latest novel, The Care and Handling of Roses with Thorns is even better. About the cost of love, roses, and kidney disease, it's that terrific hybrid--gloriously literary and also a page-turner. I'm thrilled to have Margaret here--and I hope she doesn't mind the clown pictures.

I adored the heroine of your new novel. She really starts off so prickly, and then gradually, she begins to unfold, much like a flower, and I ended up being totally in love with her. Where'd she come from?

I had the idea to write a book about rose breeding, so I began research. When I found out that many rose breeding hobbyists are retired scientists or engineers, the voice of Gal popped into my head. She always thinks she’s correct, she loves order, and she has a very methodical way of doing things. But, she’s extremely passionate and wants what’s best for everyone. She’s partially based on my late sister-in-law, whose lifelong struggle with kidney failureended last Christmas. I think Gal has developed a take-no-prisoners attitude toward life because that very attitude is necessary for surviving her chronic illness.

The details, both about roses and kidney dialysis, were fascinating. Can you tell me about the research process? What surprised you?

For rose breeding, what surprised me most was the amount of chance involved. So much of it depends on luck. The breeder who helped me most, Jim Sproul, breeds many Hulthemia roses. He told me his child got a perfect specimen on the first try. Jim was the first one to get Hulthemias to the consumer market this year—they’re called the Eyeconic Lemonade and Pink Lemonade.

For the dialysis/kidney stuff, the biggest surprise came with how many times medical doctors sort of mess up because sometimes they’re too full of pride to listen to the patient. The medical stories in Roses came from my sister-in-law. She really did have a doctor who told her that her allergy to intravenous pyelogram (IVP) dye was psychosomatic and who would not let her proceed to the transplant list unless she got this specific kind of screener using this dye. Finally, desperate to be on the transplant list, she agreed, and she had a severe anaphalytic reaction. She later switched doctors, and her new doctor pointed to studies showing it was not psychosomatic; the other doctor had clung to old beliefs and ignored her concerns.

Tell us about your writing process. Do you map things out? Rewrite a million times?

Samurai! I’m writing a book about a samurai woman who, if she were indeed a real person, might have been in my family tree. Tomoe Gozen. She lived during 12th century Japan, before the really popular time of samurai, so there are lots of persnickety details I am trying to get right. For example, they used a different kind of sword in 12th century Japan than in 15th century, and green tea was only drunk by monks and royalty then.

People say that Roses is very different than your first book, How to Be an American Housewife. How did that happen?

To me, they don’t seem too different, because I wrote both of them. First, they are both stories about female familial relationships. They have strong, potentially unlikeable, female characters who are a bit different than the typical heroine.

One of the recurring themes in my work is, how do you manage to find happiness when so much in your life can, and will, go wrong? I write imperfect characters struggling to find hope, beauty, and love in their common, everyday lives.
Posted by Caroline at 9:45 PM