Nora Zelevansky talks about Semi-Charmed Life, shoulds vs. want, and much more 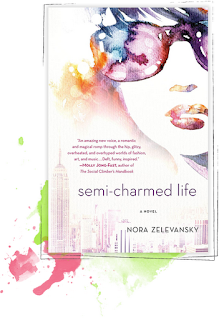 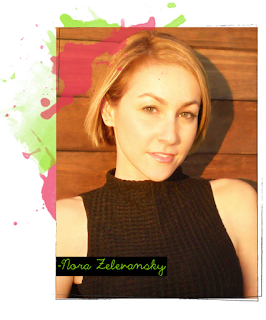 Nora Zelevansky is both novelist, journalist, essayist and editor, and the author of the very sparkling Semi-Charmed Life. We both had a conversation about writing in the wonderful Dame magazine, and I couldn't wait to ask Nora to come on the blog. Thanks, thanks, thanks, Nora!

I loved the title. Can you talk about what it means to have a semi-charmed life?

It's funny.  This wasn't the original title and we really struggled with finding the right one, which would allude to an otherworldly quality and a seemingly glamorous lifestyle (at least when viewed from the outside), but also the main character Beatrice's tendency toward poor decision making, clumsiness and her self doubt.  It's hard to find one title that fits all of that!

Beatrice comes from a "charmed" background and she falls into yet another "charmed" situation when she meets the famous Veruca Pfeffernoose, but there's a darker, more complicated to side to being inside those worlds too.  And sometimes all that charm seems like more trouble than it's worth.  So, she's sort of half-charmed, which is what the title is meant to imply.  (Also, it's the name of a 90's pop song, which is sort of funny and kitschy.)

You grew up on the Upper West Side and one of the pleasures of the books is the New York City attitude, that nothing exists outside of Manhattan, that whole "why would you go anywhere else?" attitude. Yet, the book is both a Valentine to the city and a satire about how limiting such an idea--that NYC is the best--can be. (Though frankly, I sort of feel that way myself!) How do you personally feel about this, and how much of Beatrice is or was you? (There's such a great insider feel to the novel!)

People who know my background will think that the book is largely based on my life.  That's sort of true, but mostly it's not.  The setting and the environment (the Upper West Side, an art world family, the dramatic older sister etc.) do mirror my upbringing.  My mother is a museum director and my father is an artist, but they travel constantly all over the world.  And, as opposed to Beatrice's parents, who insisted on keeping her close, they insisted that I leave New York City for college.  That was their only guideline.  They felt that it was important to broaden my horizons and meet different types of people.  I went to California, which was farther than the rest of my friends, which was alienating at first and definitely a culture shock.  I would come back and visit New York over the years before I recently moved back and I would be surprised by both the almost physical ache I felt in missing it and also by the pervasive provincialism, the idea that very little of note happened outside of the city.  Most of all, I was amused by people who—despite having very little going on—seemed to think they were "cool" or "interesting" simply because they lived in Manhattan or Brooklyn.  It's such a specific phenomenon!

The main character Beatrice Bernstein (great name by the way) is ghostwriting the blog of a socialite when she starts to take on her lifestyle of immune boosting smoothies, apartment spa, and more..So much of this delicious novel is about identity, who we want to be and who we really are, and how to discover the difference.  Can you talk a bit about how we get trapped sometimes on the way to finding our real truths and identities?

After college, my best friends and I would always discuss the struggle between "shoulds" versus "wants."  As may people that age do, we felt this strong pressure to do "the right thing," even when we didn't know what that was.  We worked to separate our ingrained childhood selves (based in part on who our families told us we were) from our adult selves.  I know I spent a good deal of time in my 20's just trying to figure out who I really wanted to be and how I saw my life.  It seems to be a relatively common experience to wake up one day and decide you don't like your role in your family dynamics or to discover that you actually ARE the funny one or the smart one or the goofy one or whatever, despite what you've previously accepted as fact.  I hear those stories a lot.

Personally, I always felt a bit rooted in two worlds.  With some exceptions, most of my New York friends came from very different households than I did and sometimes my outside life really didn't match up with my home life.  (My parents, for instance, went to Studio 54 in the 1980's and hated it.  They always turned down invitations to The Hamptons.)  I spent a lot of time, like Beatrice, in debaucherous over-the-top circles, but then coming home to this intellectual sanctuary.  Fashion and style were HUGE in my house along with creativity and intellectual ideas, but status and an easy going mindlessness were not.  Unlike Beatrice, I felt I belonged to both worlds instead of neither, but there were times when I'd look around at a party or some club and think, what am I doing here?  And, as a lifestyle journalist as an adult, a similar thing happened: I'd find myself in these very swanky settings as I struggled to pay my rent and I'd think, can I be both?

i was interested that you said this is a new category of work called New Adult, tapping twenty and thirty somethings. Can you talk more about that, please?

Obviously, Young Adult has become a huge category and it's crossed over, growing popular with adult readers too.  My hope is that this book works on various levels, appealing to readers of all different ages for different reasons (the love story versus the satire and humor, for example).

Part of the idea behind the New Adult category is that the publisher is thinking about that college aged and later 20-something reader and realizing, there's a gap here.  YA protagonists have to be 17-years-old or younger, which Beatrice is not.   But she's also not 40 yet.  I sometimes describe this book as "a beach read for smart girls/women," something that should be fun and effortless, but which has some substance too.  And that's something I know I would read, so I hope people of many ages feel the same way.

Let's talk about process! How do you write? Do you outline? Do you go by inspiration? What's your writing day like?

Well, I'm readying to start a second book in likely the same series, so that should be interesting because my process will have to be different than the first time around.  It already is!  I wrote the first book during National Novel Writing month, which is this "movement" every November designed to help people get over the mental hump of writing a novel.  (There's a book by Chris Baty that guides writers and also a website you sign up on that keeps you accountable as you log your words.)  The specific rules and guidelines actually preclude outlining and allow for only minimal research.  You write about 1,700 words a day for a month.

This system worked really well for me, as someone who would previously have an idea and then decide it wasn't worthwhile and abandon it because you're not allowed to stop or edit as you go.  I wanted to see if I could write fiction and so I tried it and I just found the whole process really satisfying.  This time around, I already have a synopsis etc.  But I do know that I'm a morning writer, which is not to say early, but is to say that I need to get right to it when I wake up.  Right now, I'm writing in my Brooklyn apartment, but I may escape to the country for a few weeks and try that as well.  We shall see!

A: New York Times op-ed's by Gail Collins, Mint Oreo's, Jennifer Egan, Tana French, rereading Fitzgerald, always Salinger ("Raise High The Roof Beam, Carpenter" is my favorite book and I read it annually), the Chesapeake shore, being back in NYC, the fact that Park Slope is basically "Portlandia," Rag & Bone shoes, Isabel Marant everything, My Girl, 30 Rock, Downton Abbey, Earth Bar smoothies all the way back in LA, Talde's bacon pad thai, Kerstin Florian's Neroli Water (which smells like heaven in the vein of Veruca's orange blossoms) and, of course, my book!

Nothing!  Your questions were perfect!  I guess the only thing I can add is that in anticipation of my first book coming out, I have so many feelings: I'm proud, nervous, hopeful and so so grateful.  This is an experience unlike any I have had before.
Posted by Caroline at 8:45 AM