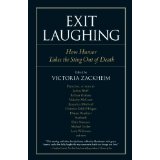 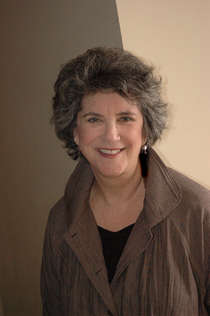 I first met Victoria Zackheim through Readerville, an online watering hole for writers and readers. And then she did something unbelievable. My husband, Jeff Tamarkin, was touring for his award-winning book, Got a Revolution, and I mentioned to Victoria that we New Yorkers were coming out to San Francisco, where she lived and perhaps we could meet for the first time.. "Well, you have to stay with me," she said. "You, Jeff, and Max (who was six at the time!) The three of us descended on her loft, never having met her, and she was so hospitable, so warm and welcoming and generous, that we all felt that we had known her for years. It was, as they say, the beginning of a spectacular friendship.Though we live on opposite coasts, we manage to see each other at least once a year, one of the highpoints for me was spending 4 days at the Pulpwood Queens Book Festival...dressed as clowns.

Exit Laughing, her latest anthology (I'm kicking myself for turning down an invitation to be in it, but at least I got to rave about it with a blurb) has just come out, and it's stellar.

Thank you, Victoria for being here, but really, thank you for everything.

Exit Laughing is about the fun side of death, theose  lighter moments of a very dark time. What made you choose this topic? And were you surprised by any of the essays?

I cared for my mother during the last eighteen months of her life. We had a complicated relationship—not so unusual for a mother and daughter—and I was often frustrated by her reluctance, and sometimes unwillingness, to discuss how she felt about her life coming to an end. It wasn't until that one defining moment, when we laughed long and hard over her request to be taken to Alaska and sent out on an ice floe to die, that I realized how precious humor could be in the darkest of times. From then on, I made an effort to share humor with her: funny stories, articles I'd read, delightfully rib-tickling things said by her beloved 7-year-old great-granddaughters. Every time we laughed together, I felt another window of our relationship blow open and let in a fresh breeze.

EXIT LAUGHING is my fifth anthology, and I have to admit that I'm surprised by every essay I receive. Perhaps it's hubris, and my belief that I can second-guess what an author will write, and I have to admit that I'm wrong nearly every time! I knew that Malachy McCourt was going to write about what really happened to Angela's Ashes, but I wasn't prepared for his outrageously funny description. (Think: undertaker, body bag, sanitation truck.) I'm very familiar with Amy Ferris's writing, which usually makes me laugh out loud, so I was knocked off-center by her deeply moving revelation regarding her mother's need to have a window seat when she flew. And who but Joshua Braff could create a parallel between death and the Road Runner? So yes, I'm always surprised...and amazed...and thrilled.

What I find most remarkable about you is how you keep reinventing who you are. Not only are you a novelist, but you've become a successful editor of anthologies, and even more astonishing, you've also become a successful playwright and screenwriter. Can you talk about how all of this came about? Did any of it daunt you? And what's next up for you?

It's funny, because I've always imagined myself as a playwright and screenwriter, and that confident part of me kept nudging me forward and whispering, "You can do that, you can!" So when I began to edit the essays for my first anthology, The Other Woman, and I kept seeing women on stage, acting out the essays, I knew I had to give it a try. I chose five pieces from the book, broke them into many fragments of text, and then wove them together to form a play. The essays have changed since that first performance, and I'm very excited to say that there will be a four-week run at the Berkeley Repertory Theatre, with opening night scheduled for February 22, 2013.

As for the movie...I was at a party, it was around 2002, and one of the guests was holding us captivated by his story of how he and two friends carried off a truly amazing prison escape in Northern Ireland. Over the years, the images that he described became so real to me that I could actually see the movie unfold. When I was introduced to an independent film producer, Matt Muzio, I related this story and he loved it. A few weeks later, I handed him a screenplay; a few weeks after that and it was ready to be shopped around. Within days, it was optioned by Identity Films. I'm working on revised scenes now!

Your question about feeling daunted is very interesting. Perhaps if I were younger, I might have entered into these projects with doubt or trepidation. But I'm not young, I've got nothing to lose, and what a freeing experience it is! I'm often asked if I'm afraid to fail. How can I fail? If I give it my best and it doesn't work, I've succeeded at giving my best. For me, the only true failure is not giving it a try.

Let's talk process. How do you write? What's your working day like?

I'm usually up, dressed, fed and ready to work by 7 AM. If I'm in the middle of writing, I might write until early evening, take a break for dinner, and then keep working until there's nothing left...which can happen at 9 PM or 4 AM, depending if I'm in that zone. I don't recommend working like this...it's very hard on the body...but it's how I've always worked. And yes, I've even set alarms to make me stand up and move around, but sometimes I work with such focus that I don't hear the alarm!

Identity Films got excellent and enthusiastic input from several potential directors, so now I'm shifting the focus of the screenplay and writing entirely new scenes. I LOVE doing this, but I must admit to getting a wee bit obsessive about doing it right!

I have a new project, which I'll begin as soon as the screenplay is finished and delivered. My theater partner, producer/director Ellie Mednick, and I have just been given the rights to the  memoir, Entangled, which I'm going to adapt to the theater. I'm very excited about this and can't wait to get to work!
Posted by Caroline at 8:57 AM