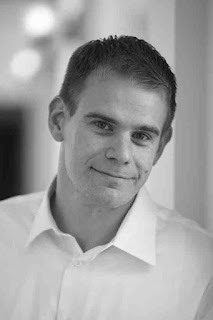 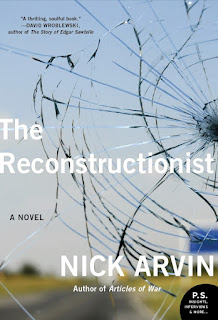 Nick Arvin wrote one of my favorite books, The Reconstructionist, about one of my favorite subjects: car crashes. What's really interesting is that Nick holds degrees in automotive and forensic engineering, which puts a whole new spin on things. His work has appeared in the New Yorker, the Wall Street Journal and more, and he's also the author of In the Electric Eden and Articles of War. He's the recipient of the Rosenthal Foundation Award from the American Academy of Arts and Letters, the Boyd Award from the American Library Association, The Colorado Book Award, and fellowships from the Michener-Copernicus Society, the Isherwood Foundation and the National Endowment of the arts.

I'm thrilled Nick agreed to write something more for my blog. Thank you, Nick!

The Curious Case Of The Book That Was Finished But Wasn't

Due to an odd circumstance, The Reconstructionist was published in the United Kingdom in a version very different from the edition published here in the United States. This came up briefly in an interview I did for Mark Stevens' blog; I thought I'd expand on the story here...

The root of the problem (if it's a problem; I'm not really sure) was that my previous novel, Articles of War, was acquired by its publisher in the UK as the first of a two book deal. That happened because my agent's counterpart in London shopped the book around and found only one publisher that was interested, and they wanted a two book deal. And I thought: Who cares how many future books they want attached to the deal! Exciting to be published overseas!

My agent began sending The Reconstructionist around to the publishers in New York. He also sent it to my UK editor. They had contractual rights to this new book, but they hadn't actually paid me anything for it yet. I figured there was a good chance that they would simply turn it down, since Articles of War didn't sell much in the UK. A month passed. And then a message came from the UK editor. She loved it! They would put it in their catalog for next spring!

Meanwhile, publishers in New York were turning it down left and right. Months passed while my agent worked through the various houses until, finally, Harper Perennial took a shine to it. It would be published in the US! Hooray!

My US editor promised comments on the book, but months passed. Meanwhile, the editor in the UK was pushing the book through copyediting, proofreading, putting together cover art, writing copy for the catalog, etc. I received the galleys. I was delighted to see that all my "tires" had been turned into "tyres," and I was finished!
Except that I wasn't finished, because then received a nine-page single-spaced letter from my US editor, describing his concerns and suggestions for the manuscript.
I'd been working on the book for about five years now, and the last thing I wanted to do was go through another round of major revisions. But the editor had put a lot of time, thought, and care into that letter, and I could see that the issues he was raising were legitimate.
So, the UK edition sailed into bookstores at about the same time that I began working through the issues in the letter.
In his letter, the US editor suggested the book needed maybe 20 additional pages at the beginning, to better set up the characters and plot. I ended up writing nearly 100 new pages. Those new pages include a quirky sequence of events centering around a lot of roadkilled wild pigs and a zombie pig on wheels. I think they'’re some of the best pages in the book, and when I describe the UK edition to readers, they often have a hard time believing that the pigs aren't in there, because they became so central to the book.
What's the lesson for a writer? I suppose simply to always remain open to feedback that allows you to see new possibilities in your work. Despite the weariness involved in writing new scenes for a project that's been haunting your life for too long already, the writing in those circumstances can come quickly if the purpose of the new writing is clear, because by then the voice and characters are well defined (and if they're not, you've got bigger problems). I find it can result in some of my best writing.
And, happily, there will be a new UK edition published this summer that matches the US edition.