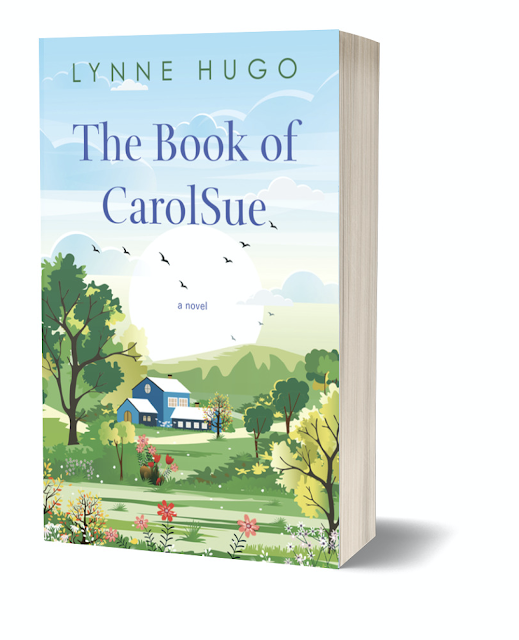 Lynne Hugo is an award-winning novelist, poet, and memoirist. Her 2014 novel, A Matter of Mercy, won an Independent Publisher silver medal for best regional fiction. The recipient of a National Endowment for the Arts fellowship, she holds a bachelor's degree from Connecticut College and a master's degree from Miami University. She lives with her husband in Ohio. Thank you for being here, Lynne!

.I always believe that authors are somehow haunted into writing their books, or if not haunted, that there is some question they need to solve through their writing. What was it for you? And did you get the answer you expected?

What a wonderful question! You’re right, Caroline. Sometimes it is a question, for sure. For me, often it’s also that I have a conviction, something in which I believe strongly that I want to dramatize.

The Testament of Harold’s Wife a question was prompted by something I saw on a slushy, dreary December twilight on my way to the grocery store. At a traffic light, I caught up to a monster black SUV on oversize wheels. The windows were tinted dark, and the SUV loomed huge, my little silver Honda’s windshield seeming like the target of its exhaust pipe. There was just enough time to catch the white lettering that stretched across the SUV back window: a date, two sets of curvy lines (angel wings?) with the name Nicholas in between them, and then another date. Underneath was written A Grandfather Never Forgives. I was moved, saddened, intrigued. A bit horrified. Those were birth and death dates, I realized. What could a grandson have done to arouse such rage?

The traffic light changed too quickly, and the SUV made a left turn. Impulsively I followed it, hoping to glean more. I imagined a possible scenario: maybe Nicholas had been a teenager, repeatedly warned against drinking or smoking pot, say, but he’d done so, and killed himself and other people in a car. Or, then I thought—wait! Who exactly is the unforgiven? There’s another story in it, perhaps. Maybe someone else killed the grandson? What can I extrapolate about how people express grief? What else is this grandfather doing?

That’s how a novel started from an SUV I saw on the way to the grocery store, but I saved the idea and set it aside to keep working on the one I was writing at the time. I wish I’d had the presence of mind to take a picture of that SUV when I came to my senses, realized I couldn’t stalk a stranger because his car intrigued me, turned around, and went to get my groceries. At the time, I didn’t know the memory would fit with other experiences that would start later, in the spring, so compelling that I’d start The Testament of Harold’s Wife right then because I’d met some of Testament’s most memorable characters. The chickens. But that’s another story, and not one that involves a question, but the one that just made me laugh: A dear friend who lives in town—not on a farm—lost her mind and brought home four baby chicks. No, she didn’t know a thing about chickens. No, she didn’t have a place to keep them.

This brings me to another reason I write about something: I love to learn new things. Diana had to learn all about raising chickens and her mistakes were pretty funny. So I gave Louisa, the protagonist a very wry sense of humor and a sister to bounce it off.  I don’t think there are enough older women protagonists, so Louisa’s retired from teaching elementary school (teachers are heroes). And lives on a small family farm because…I love that landscape. That grandfather who never forgives? He became Harold, Louisa’s deceased husband, and Louisa decides to take up his cause.

Right now, you might be thinking “But Lynne, you’re talking about the wrong book, aren’t you?” Isn’t your new novel titled The Book of CarolSue? Exactly right. The Book of CarolSue is a stand alone follow up to The Testament of Harold’s Wife—because I loved the setting and characters so much, and readers did too, that CarolSue wanted her own story, and oh my, does she ever have one. Louisa’s adult son Gary gets himself in trouble—again—because he falls for a scam with a fake religious cult. But the very serious theme has to do with the plight of undocumented immigrants, what bring them here, what happens to them, how things spin out of control. In this novel, the realities behind immigration were what I wanted to learn about. I do have convictions about how we treat immigrants, and in this case, I wanted to dramatize them, simply by showing one human story.

There’s no need to read The Testament of Harold’s Wife to read The Book of CarolSue—but I end up talking about them together because CarolSue came about when I just wasn’t finished living in that world or with those people.

So much of The Book of CarolSue is truly relevant, particularly about immigration. What was your research like and what surprised you?

I researched by watching YouTube videos and reading the printed accounts by American missionary and secular volunteers and  professional workers in Honduras, as well as the stories recorded by Honduran immigrants, and news accounts of the extreme violence by gangs who commonly kidnap and rape young teenage girls in Honduras. The drug activity is often unavoidable, with young boys forced to join gangs, and the poverty crushing. The only way to survive may be to try to make it out. What surprised me was my conclusion: the certainty I felt that were I in the circumstance that so many Honduran families are, I would make exactly the same choice they do: risk everything, put my life on the line, even put my children’s lives on the line on the chance of an escape. Like the immigrants making their tortuous way north, I would do everything I possibly could to save my children from inevitable horrors and get them to where my own diligence and work would have a chance to create something good for them. Just a chance instead of none.

What I especially loved about the book was all the family feelings woven throughout it. Without giving anything away, I wonder if you can talk about the last chapter, The Testament of Harold’s Wife, which for me, pulled everything together and was so moving.

Thank you for bringing up that novel! The publisher decided to include the first couple of chapters of The Testament of Harold’s Wife as a teaser, to encourage readers who enjoy The Book of CarolSue and would like more time on the southeastern Indiana family farm to pick up the novel that tells CarolSue’s sister Louisa’s story. Testament actually takes place two years before CarolSue’s story; The Book of CarolSue references the pivotal events Louisa recounts in detail in her book, although each novel stands alone.

I almost always write about family ties in one way or another whether the family is blood or the intense ties of a created one. Family is such a crucible for our strongest emotion—our deepest, most wrenching pain and our most cherished joys—and where I find themes that are universal as well as the still-unanswered and probably ultimately unanswerable questions that eat at the edges of our lives. It’s where we suffer most from loss, and where we look for and share meaning.

Besides the pandemic and world politics, what’s obsessing you now and why?

That is really kind of you to ask. The novel I am writing now—I just finished the first draft and sent to my agent for her feedback before tackling draft two—has to do with communication and the impediments to it. The title is RESCUE. Here’s the elevator pitch: Renowned primatologist, Kate McKinstry, and zookeeper, Marc Lopez, clash over the meaning, benefit and harm of “rescue” while working with Eve, a traumatized great ape, at a large city zoo and becoming romantically involved with each other. Marc bets his life that he can communicate with a chimpanzee to save the chimp and another worker in an emergency.

Why? Because I am passionate about saving endangered animals and our endangered planet. This topic let me bring in the effects of climate change and habitat destruction, animal welfare, and issues and problems in human communication while—I hope—telling a compelling page turner of a story.

Other than this project, I’m obsessed with my own beloved family whom I cherish: three grandchildren, a daughter and a son-in-law, in addition to my husband. I have my wonderful sister and terrific inlaws, as well and life-long dear friends. My son died last September which was a blow from which I’ll probably never fully recover. Losing him heightened my sense of the fragility and preciousness of life. It’s strange to realize that I’d written two books in which the women protagonists were dealing with overwhelming loss before this happened—and no, I had no premonition. At least I don’t think I did. But I believe that love endures and I believe in the human spirit, and in courage and resilience, which both CarolSue and Louisa demonstrate. And now I’m trying to demonstrate that, too.

You have done a beautiful job, as usual. Maybe this question: what makes you laugh?

I love writing humor, and mixing humor into difficult, sad situations. I think it’s what saves us. Absurdity makes me laugh and what I most like to make fun of is myself. And I love people who laugh at themselves. Not much that is happening in our world is funny right now—believe me, I know that—but it used to be fun to find the absurdities in the world and know that we all make ridiculous mistakes and it’s okay. Louisa is particularly funny, and CarolSue often her foil. I hope the two of them make people laugh, especially as Louisa is so open and direct in what she shares as she and CarolSue find their way to the other side of pain.

Can you please give a shout out to another author and to an indie bookstore?

I love the work of so many authors, yours especially included, Caroline. The amazing Jenna Blum and Donna Everhart. Tayari Jones, Elizabeth Wetmore, Kristin Fields. Even as I start naming them, so many more pop into my mind…can I just keep going? Diane Chamberlain has been so incredibly good and gracious and oh, her body of work! I say the same of Randy Susan Meyers and Laura Harrington. My all time favorite bookstore is Quarter Moon in Topsail Beach, North Carolina where the incomparable owner and bookseller Lori Fisher has been kind to host me in multiple book events for a number of my novels—and she does so much for so many authors. The two Provincetown MA bookstores. Joseph Beth Booksellers in Cincinnati. I know, I know. You said “an” indie bookstore. Nope, can’t do one. I am grateful to so many authors and booksellers, and to you Caroline. Thank you so much for inviting me to your blog!