Sometimes, reading about plague is the antitdote to living through one: John Kelly talks about his absolutely brilliant THE GREAT MORTALITY, An Intimate History of the Black Death, the Most Devastating Plague of all time 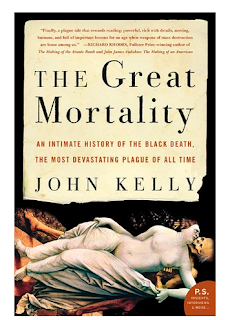 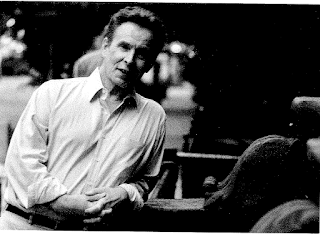 John Kelly is a genius writer, and this particular book could not be more timely. THE GREAT MORTALITY, about the Black Death, has been  enormously praised. Richard Preston, author of THE HOT ZONE (about Ebola) wrote: "I couldn't stop reading THE GREAT MORTALITY, It is a book of brilliance and wisdom." Richard Rhodes, author of THE MAKING OF THE ATOMIC BOMB, called it "powerful, humane, rich with details, moving, and full of important lessons." Jonathan Yardley of the WASHINGTON POST and  Michiko Kakutani of the NEW YORK TIMES gave it very positive and major reviews right after it was published. I am so honored to host John here.

Thank you so much, John!

Q: What lessons can we learn today from your much-touted 2005 book?

A: First of all, Caroline, thank you for complimenting the book.  Secondly, as that wit Voltaire once said,  "History always changes, but people never do.”
First I will write about the medical / scientific / geographic similarities, then about the human ones.
The plague that I wrote about -- La Moria Grandissima: The Black Death -- was a pandemic that killed a third of Europe's then-75 million people during the years 1347-49. This high figure is, thankfully, not going to be reached by our current pandemic, coronavirus, because enough countries, so far, have been practicing vigilant shelter-in-place in a world with the instant media that the 14th century would not have even guessed was imaginable. (Despite the egregious and cruel irresponsibility of our coward in the White House, most of our governors and heroic health care workers and other local leaders and citizens are taking it upon themselves to do this necessary work themselves.) But the fact that half of the world is in lockdown – half of the world! – shows us that the enormous reach of this pandemic is close to the more fatal reach of the 14th century one.
The Black Death was borne by a bacteria on a rodent, just as this pandemic – coronavirus -- was borne by a virus from a bat. The Black Death also travelled from nation to nation from north-central Asia to China to the west, when trade opened up. Today, in our instant-global-travel world, the spread has been much more rapid – what took years in the 14th century has taken short months today.
The appalling – grotesque, by our standards -- lack of hygiene in European cities spread the Black Death like wildfire. People bathed monthly at best. About six streets in Paris  were named for merde, which was often tossed out windows in buckets. Here was daytime London in 1348: “Imagine a shopping mall where everyone shouts, no one washes, front teeth are uncommon, and the shopping music is provided by the slaughterhouse up the road.”
Today’s pandemic was made for our more sterile times; coronavirus doesn’t need filth because the 21st century world is that much different than the 14th. It is highly contagious in even the cleanest and most elite circles (Tom Hanks and Rita Wilson and Prince Philip and Boris Johnson all got it).
But, in both the long-ago and today, mere talking proved dangerous. In 1348, delirious seamen reached ports in Italy so infested that, merely by having a brief conversation with one of them, an uninfected person could catch it. Today, our heroic epidemiologist and virology authorities on TV are telling us that talking to someone closer than six feet apart could be dangerous.
In 1348 and 49, the plague-dead were dumped into plague pits; today, in New York City, refrigerated trucks are temporary morgues and rumors were spreading that empty city parks will be used for burial. (Fortunately, these were shot down by Mayor deBlasio, though he recently mentioned an out of the way city field for temporary burials.)
In 1348, a worker in Italy, watching the devastation, said: “This is the end of the world.” Many are feeling – fearful of that – now.

Now to the way that human nature has stayed the same:
First, sexism. In the 14th century, a brilliant female doctor in France was denied licensure because of her gender. Here, today, we see a different kind of sexism going on: Ambassador Deborah Birx, the enormously accomplished physician-Naval officer and former head of the Obama Ebola response, is now made to compliment and defer to Trump at press conferences, despite her beyond-overwhelmingly superior authority, humanity, and ethics. Despite the copious female scientific authorities (interviewed on CNN and MSNBC), Birx is always the only female at Trump’s outrageously self-lionizing, lie-filled forced incursions on the truth-needing public’s lives.
Second, the need for escapism. In the 14th century, plague-terrorized people put aside their trauma for an hour or so to watch glamorous scandal, as when a beautiful 23 year old Italian queen was brought up on (and acquitted of) murdering her royal husband. Today we get pandemic relief from The Tiger King, the Kardashians, the Royals, and more.
Thirdly: Pandemics bring out the worst bigotry in people. The Black Death led to horrible anti-Semitism – cities actually burned their Jewish populations. Today, thanks to Trump’s calling coronavirus “the Chinese virus,” harassment and threats against Asian Americans have sprung up. His calling out of female journalists of color as “nasty” and “threatening” makes things worse.
Finally – and despite all these awful things -- the darkest and deadliest pandemics prove that there are good people. In the 14th century, monks washed the feet of sufferers and surgeons served the sick even when they were sick themselves. A stout and resolute Italian bookkeeper named Agnolo di Tura buried his wife and all his children, dutifully doing what had to be done, despite the pain. Today, the heroes that are our health care providers, other first and second and third responders, restaurant and pharmacy and supermarket and other staff that keep up essential services going while risking so much: They are our heroes! And it is inspiring for us to know that heroes exist.

Q: What else can we do to learn from the past, at this frightening moment?
A: There are a number of other books that are excellent: John Barry’s The Great Influenza. Richard Preston’s The Hot Zone. Laurie Garrett’s Ebola: Story of an Outbreak. Randy Shilts’s And The Band Played On. We can learn from the past, even though, in this horrendous case, the leaders of our government should have learned from the plentiful warnings of the recent few years, and those that were delivered even before that.
To all of us: Let’s work together and stay safe.
Thanks for giving me all this space, Caroline.
+++