A fierce eloquent look at Hawai‘i that goes beyond the resorts. Liz Plato talks about this, love, loss, and more in her racking-up-the-raves collection of essays, Volcanoes Palm Trees & Privilege 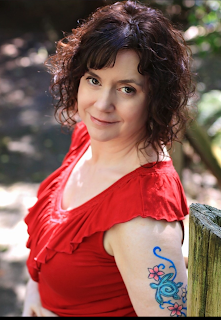 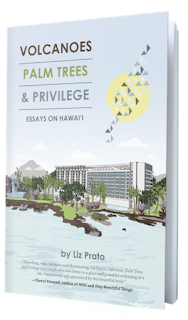 Liz Prato is the author of the short story collection, Baby's on Fire and editor of The Night, and the Rain, and the River: 22 Stories. Her stories and essays have appeared in dozens of literary journals and magazines, including Hayden's Ferry Review, Carolina Quarterly, Baltimore Review, The Rumpus, Salon, Hunger Mountain, and ZYZZYVA. She is the Editor at Large for Forest Avenue Press.


A Tennessee Williams Scholar at the 2012 Sewanee Writers Conference and a frequent attendee of the Tin House Summer Writers Workshop, Liz has been privileged to study with Steve Almond, Aimee Bender, Charles D'Ambrosio, Anthony Doerr, Jim Shepard, and many other talented authors.
Liz lives with her furry feline friends and her best friend/husband, who is a bookseller, musician, and writer in Portland, Oregon.

Her latest book Volcanoes Palm Trees & Privilege offers an incredible journey, as well as a deeply personal tale of love and love. Here's just some of the raves:


“Liz Prato’s profound meditations on place dislocate and then relocate understandings of Hawaiʻi from the point of view of the non-native visitor. This book is a love letter to the land and people of Hawaiʻi, with a keen awareness that some people must let their story of this place go. Breathtaking."
—Lidia Yuknavitch, author of The Chronology of Water and Book of Joan

"Volcanoes, Palm Trees, and Privilege is not only a breezy and appealing primer on how to negotiate both Hawai’i in all its astonishing variety and the enormous advantages and nagging burdens of privilege; it’s also a moving memoir about familial loss and the reconstitution of an essential version of the self.  Liz Prato is beautifully smart about how disempowerment works, and how to combat it."
—Jim Shepard, author of The Book of Aron, and The Tunnel at the End of the Light

"In  Volcanoes, Palm Trees, and Privilege we witness a deeply personal tale of love, loss, and honest accounting as the author comes to understand her relationship with the islands through the crucible of family.”
—Kristiana Kahakauwila, author of
This Is Paradise

“A brilliant meditation on cheeseburgers in paradise, Liz Prato’s fearless and tender investigation of our complex relationship with Hawai‘i will blow your mind. Hula dancers, aloha shirts, surfing, and the idyllic tropical vacation will never look the same. It’s a reckoning whose time is long overdue.”
—Karen Karbo, author of In Praise of Difficult Women, and the Kick-Ass Women series

"Prato’s work stays winningly informal and idiosyncratic throughout and . . . coalesces into an intriguing and informative journey through the 50th state." --Publishers Weekly


I always want to know what is haunting a writer into writing the book that they write? Why write about Hawaii now?

When I first started writing about it, there was no sense of why now? I started writing about Hawai‘i because I love it and am obsessed with it and could only hope it would matter to other people in some way. But since I started writing the book, we’ve become way more conscious of issues of privilege, and of native people—their rights, their land, their lives, and how colonialism continues to try to steal their culture. Hawai‘i also keeps showing up in the headlines for varied reasons: because Trump’s international relations made it necessary to implement a monthly test of an air attack warning signal (and the unfortunate “oops” that happened when it was triggered a year ago); how the 9th Circuit Court in Hawai‘i has made significant rulings against Trump; how the massive destruction of last year’s eruption of Kilauea reminds us of the ferocity of nature.

I happen to love Hawaii, too, but Oahu, not Maui, which to us, was a very different, experience. And it’s funny, you came to understand the islands through your family—so did we. Driving through Maui exhausted us, and the beaches disappointed us, but Oahu brought us together in one terrifyingly exhilarating swim under a waterfall. How do you think nature does that alchemy? And why Hawaii particularly?

Wow, the swim under the waterfall story is cool! I think part of the alchemy is because in Hawai‘i, you’re always as close to nature as you are to human-made structures. Even if you’re in the middle of downtown Honolulu, you’re two miles from the waves and currents of the Pacific Ocean, and three miles from the jungle interior of O‘ahu. You’re surrounded by water, and how far you can travel is constrained by it. Tsunami warning signals are tested every month. Everywhere you look are volcanoes, or proof of volcanoes. You’re constantly reminded that nature is bigger and more powerful than we are, and that you’re somewhat at its mercy on this isolated archipelago. I think that brings us closer to that organic piece of us—of what we are made of, of where we come from—and we also realize that we need each other to survive.

Being a white tourist in a land that has been spoiled by white people—tourists and colonists—is unsettling to read about. Can you talk about this please?

It became the question I couldn’t ignore. If you put on blinders and don’t look beyond the resort you’re staying in, and don’t read the newspapers or watch the news, you could go to Hawai‘i and not think about it. And there might be something about how often I’ve been there, that each time I wanted to experience Hawai‘i differently and wanted to learn more, that opened me up to how Hawaiians were talking about  these issues. They were talking about how their land was stolen, their language was pushed to the margins, their people were killed, their monarchy was deposed by a coup orchestrated by the U.S., and how modern Native Hawaiians have higher rates of poverty, unemployment, houselessness and serious health issues than their non-Native counterparts. Oh, but I’ll just go lie by the pool that uses 500,000 gallons of water and order drinks from someone who has to work three jobs in order to afford the exorbitant cost of living in Hawai‘i and just be la-la-la about it? No, I’m going to approach the land and people of Hawai‘i with more respect.

I get that people who are paying thousands of dollars for a vacation don’t want their paradise goggles to get fogged by such complicated issues. It’s not a lot of fun. But the idea that we are entitled to fun without being interrupted by the realities of how we impact other people and places is a very basis of privilege. I don’t believe anyone should feel ashamed of or apologize for whatever privilege they’ve been granted in life. But that doesn’t mean we should ignore it, either. Earth is one big interconnected organism, and how we behave—whether at home or on vacation—has an effect on it. We have the choice to make a positive impact or a negative one. It really doesn’t take that much to be respectful. And if anyone needs a “but how does this benefit me?” reason, then there’s this: It helps us see and feel how we’re all connected. It allows us to have gratitude, and enhances our satisfaction.

Did writing about a place when you came back home make you rethink what you had experienced at all? How so?

Oh my god yes, so much! And let me tell you, it was a long look back. When I was visiting as a teenager I didn’t think about Native Hawaiians and their land at all. I had local friends, so it’s not like I was completely insulated from the realities of living in Hawai‘i, but my entire understanding of Hawai‘i still sprung from the expectation that they wanted and needed white people to be there. That we had a right to be there (insert giant eye-roll here). My dad was a white mainlander who bought and developed land on Maui, and I didn’t question it. But even by the time I was in my early twenties, my brother and I were feeling weirdly dislocated by the massive development going on in South Maui. Beaches that we used to go to with our local friends were being built on with condos and hotels. And the hotels were really glitzy, these fantasy destination resorts that looked like they belonged in Las Vegas, but didn’t seem to have much to do with Hawai‘i. But I don’t think we had any sense of the way our family was complicit in that happening. It wasn’t until the last five years that it kind of hit me: oh, my dad was the bad guy. He was the guy contributing to the people getting further from the ‘āina (the land). So, it didn’t make me just rethink my current relationship with Hawai‘i, but the entire genesis of my love for it.
What’s obsessing you now and why?
GenX. How did we get here? What happened to those of us who didn’t survive? Just from my tiny private high school, I have personal connections to a lot of stories that reflect so many of the current socio-political issues we’re grappling with. A high school friend came from this liberal peace-loving family, but her younger brother became a skinhead and died in a dramatic police shoot out. Another friend was studying abroad in London in 1988, and a dozen of her friends—including her best friend—were on the Pan Am flight that was blown up over Lockerbie Scotland. One of my best friends from high school was a total hippie—we participated in peace demonstrations together—and now he’s a staunch conservative. And it was recently revealed that my high school had hired a teacher back in the eighties who was a sexual-offender in all the previous prep schools he taught at, but no one in authority ever shared that information. They just “passed the trash” to other schools, and he was allowed to go on abusing teen girls.  It’s all part of the same puzzle, so I’m exploring those stories in essays and (an attempt at) a novel.

What question didn’t I ask that I should have?
[my mind is so completely wiped out from AWP that I can’t think of a thing!]