A brilliantly epic saga about art (think Tiffany), the ends and beginnings of lives, communes, and the dazzle of secrets. The sublime Lisa Gornick talks about her racking-up the raves novel THE PEACOCK FEAST. 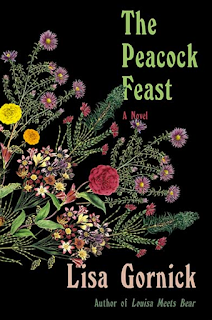 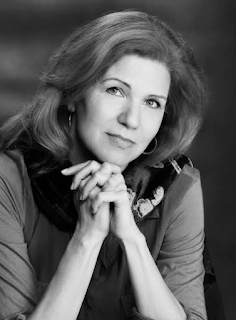 I first met Lisa Gornick through her novels, which I loved and was astonished by. But I didn't get to actually meet her in person until she published Louisa Meets Bear, and I was smitten by her intellect, her warmth and I wanted nothing more than to hang out with her. Her latest novel, THE PEACOCK FEAST, about generations of family and the secrets that seem to keep them, is so dazzling, that I found myself rereading pages.  And I'm not the only one, because look at some of the raves pouring in:

"An intricate, emotionally complex and glorious chronicle . . . Swerves and fatal mistakes abound . . . [in] this magical novel.”

–Jane Ciabattari, BBC-Culture
“[A] wonderfully complex, many-stranded novel . . . The Peacock Feast is marvelously rich in character, event and locale . . . A thoroughly rewarding novel and, though not terribly long, a truly mighty one.”
—Katherine A. Powers, Newsday
“Lisa Gornick…has crafted a perfect novel in The Peacock Feast… [A] luxurious novel . . .It’s a book that beckons readers to get lost in its tapestry.”
—New Jersey Star-Ledger
“Fun, trenchant, immersive . . . but on top of that I got historical and psychological mystery, art history, and several different lush settings . . . Exactly the book I needed.”
–Rebecca Makkai, Electric Literature

Lisa has been hailed by NPR as “one of the most perceptive, compassionate writers of fiction in America…immensely talented and brave.” She is also the author of Louisa Meets Bear, and Tinderbox—all published by Sarah Crichton Books/Farrar, Straus and Giroux, and Picador—as well as A Private Sorcery, published by Algonquin. Lisa lives in New York City with her husband and two sons.

I'm so thrilled and honored to have her here, Lisa. Thank you so, so much.


I always think that writers are haunted into writing their books. What was haunting you to

One snowy February day, now over a decade ago, I wandered into an exhibit at the Metropolitan Museum of Art about Laurelton Hall, the dream-like estate Louis C. Tiffany, known largely for his works in glass, built in Oyster Bay, Long Island on 588 lavishly landscaped acres. Unlike many of the mansions of the Gilded Era that were reproductions of a French chateau or British manor, Laurelton Hall was a stylistic hodge-podge heavily influenced by Tiffany’s interest in Orientalist arts. There was a fountain court modeled after the Topkapi palace in Istanbul, a loggia with columns topped by ceramic blooms inspired by the Agra Fort in India, and a blue-tiled minaret that housed the heating system. What stopped me in my tracks, however, was a photograph (now the frontispiece of the novel) of a procession of five young women dressed in white Grecian gowns with straps that encircled their breasts and buttocks. The woman leading the group wore a cap made from the head of a peacock with its beak resting on her forehead. She and the two behind her held silver salvers on their shoulders with a roasted peacock atop, while the others carried bouquets of peacock feathers. Who had conceived of this horrifying but gorgeous tableau, like an illustration for a Grimm’s fairytale? And who were these young women? By the time I began to have a sense of the answers, the seed for a novel had been planted.

Grace’s details of being raised in a commune were amazing. What was your research like?

I’m so glad you asked about this because the story of Grace’s parents’ move to Riva Crik—the fictional commune in Mendocino County where Grace and her twin brother, Garcia, are born—is easily overshadowed by the Tiffany strand of the novel. I started with an idea about how the hints in 1963 San Francisco of looming change seep into the consciousness of an adolescent, himself on the precipice between childhood and adult life.  Forgive me for quoting from the novel, but it more concisely captures the interface between external and internal reality than I could do by paraphrasing:

Leo did not know about the lysergic acid experiments being carried out in Menlo Park to the south or that the Haight would become the sanctuary for seekers and lost souls from Maine to Texas, but he could sense it. It was as though he’d been given truth glasses and the life he led in the Presidio and Pacific Heights suddenly looked absurd: the navy blazer he wore to school, the tennis whites required on the courts at his grandparents’ club, the striped tie for Sunday dinners—costumes of a bygone era.

I was familiar with the history of the Haight from having worked at the Haight-Ashbury Free Medical Clinic. As for the communes of Northern California, a lot has been written about the experiments in collective living inspired by the sixties counterculture and some of the newsletters and magazines published by the communes in those years are available, but the era came most alive for me during a visit to Mendocino when some of the original commune members, still living on the same land, generously allowed me to interview them.

Was there anything astonishing that you wanted to use and you didn’t?

Oh my goodness, I fell down the novelist’s proverbial research rabbit hole with Ken Kesey and the Merry Pranksters.  Astonishing only tamely scratches the surface with regards to their adventures crossing the country in a psychedelically painted bus dressed in outlandish hand-made clothing with music blasting from speakers mounted on the roof and a jug of LSD-laced orange juice stashed aboard. In early drafts, many of the Pranksters—Kesey, Mountain Girl, Neil Cassady, Stark Naked—and others in their circle—Larry McMurtry, Jerry Garcia, Alan Ginsberg—had their own scenes. I also had a long chapter about Grace’s mother’s last year of high school in Houston, including the day before the Kennedy assassination when she goes with her mother to the Houston Hobby airport to join the bystanders greeting LBJ and Lady Bird as they descend the steps from Air Force Two, and then the President and Jackie, in a white dress with a poplin top and a black pillbox hat, as they wave from the door of Air Force One. You know the adage about killing your darlings. I loved some of these stories for the way they capture the seismic shifts of the time, but my sage agent and editor convinced me of the eye-rolling dangers of having my fictional characters bumping up with these sixties icons—as clichéd as having a character in 1920s Paris at the Café Rotonde where it just happens that at the adjacent table Fitzgerald and Hemingway are discussing the manuscript of The Sun Also Rises. Coincidences are thrilling in life but treacherous in novels.

So much of this extraordinary novel is about time and secrets and the intersection of lives,


particularly of two very different women. Why is it that secrets gain power the longer they


are kept, do you think?

To be prosaic, secrets are like a water leak. You may start off with a hairline crack and a few drops of water on the surface of a pipe, but as time goes on the collateral damage seeps into distant places. Part of this collateral damage, in my view, is that we lose touch with what happened as opposed to our story of what happened such that reality, memory, and fantasy become intertwined and difficult to distinguish. Writing fiction carries similar risks. You may start off with the kernel of something experienced, and then you change what happened, either to protect the persons who were involved or to make the situation more resonant, and end up with the fiction more vivid than the recollection.

In the novel, two women, separated by a continent and two generations, have both been impacted by the same event from a century before. Returning to the water leak analogy, it’s as though they live in the same building but don’t know each other or how their lives are connected by each suffering the different impacts—for one, perhaps, the ceiling mysteriously collapses; for the other, the walls are filled with mice—of the same hairline crack.

Three generations plus a hundred years is daunting for any writer. (Prudence, after all, goes


track, and was there ever a moment where you felt: oh, this is too much for me to do? (Not


that I think YOU have this problem, but I do when I write.) And how daunting was it to base


parts of the novel on real historical events?

Novelists look at one another’s finished work and think, Oh, that writer didn’t trudge through the swampy confusion I did! The Peacock Feast required an insane amount of work: the research (not only about the Tiffany and Freud families and the 1960s, but also about hospice work and capital punishment in Texas in the 1970s and 1980s, when youth were executed), figuring out the structure, threading the mystery the secret spurred with the hope that it would both come as a surprise and seem inevitable. Because I was committed to respecting what I know of historical reality, I had to keep elaborate timelines about the relevant dates of events in the lives of Louis C. Tiffany, Dorothy and Robert Burlingham, the Freud family, and Grace Slick—and then make sure that when my fictional characters interacted with the historical ones, the sequences aligned.

I always wonder about process, if writers learn from their past novels or if every novel is a


brand new terrifying thing to contemplate. Can you talk about this please?

One of the main distinctions, I think, between literary fiction and genre fiction is that literary fiction writers are always trying to do something new: to stretch the boundaries both of what they’ve accomplished with their prior work and what the ever-changing form of the novel itself has done. Given that aim, for me, writing never becomes easier. What has changed is that I better understand my own process: the need to allow for confusion, for days when the work feels wooden, for how God-awful my early drafts are, for the role of reading in my work—and I better understand how and when to receive feedback and what to do with it. It’s a painful endeavor at nearly every phase of the process.  The longer I work at fiction, which, in my case feels more like an obsession or fate than a choice, the more I believe the overused saying: don’t become a writer unless there’s no other way you can imagine a satisfying life.

I’m obsessed these days with conciseness on every level and how that relates to the compression and depiction of deep feeling, and with the resonances between structure in music and structure in novels. It’s all a bit wonky and an excuse for a lot of reading, which is a great pleasure for me.  And, like so many of us, I’m obsessed with the boundary between memoir and novels, and between truth and fiction: the ethics as well as the artistry.

You’ve asked marvelous questions, and I think I’ve said enough for readers to have a hunch as to whether my book will sing to them now. Thank you!