Kitty Zeldis talks about why she took a new name to publish a new book, NOT OUR KIND, about anti-semitism, 1940s New York City, female friendship, and more. 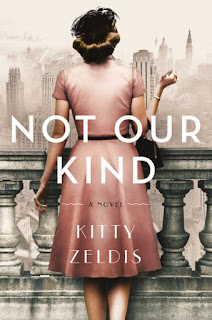 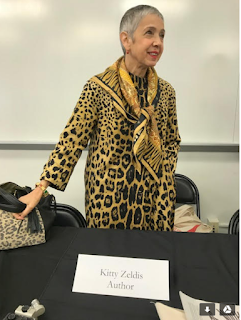 I've known Kitty for years, deeply admiring her work--and her sense of style--(part of why I look forward to seeing her is to swoon over what she has on!) She's the author of the many highly praised novels and books for kids, but Kitty isn't her real name. And in this essay, she's about to tell us all why.

But first, here are some the raves she's racking up for her latest book, NOT OUR KIND,  about class, culture, anti-semitism in 1940s New York City.

“A young Jewish teacher and a WASPy married woman find an unexpected connection in post-World War II New York. . . . Zeldis paints a vivid picture of two separate New Yorks in the 1940s—Eleanor’s shabby clothes and budget meals versus Patricia’s fancy dresses and staff-prepared dinners. Their twin journeys toward independence—Eleanor’s from her mother and Patricia’s from her husband—show that no matter how much money a woman had, she was still constrained by the misogyny and stifling gender roles of the time. A compelling tale of friendship, class, prejudice, and love.” (Kirkus Reviews)

“Let the glorious period details wash all over you—the clothes, the glamour, the excitement of New York, circa 1947.  But the most remarkable achievement in NOT OUR KIND is the complex relationship between women from two different worlds that Kitty Zeldis expertly explores. The questions and prejudices that each woman has to confront are issues we are still exploring today, which makes this novel timely as well as entertaining.” (Melanie Benjamin, New York Times bestselling author of The Swans of Fifth Avenue and The Girls in the Picture)

“Kitty Zeldis has a gift for making even the smallest details of the past shine with vivid color. The story she tells in NOT OUR KIND—of two women in post-World War II New York trying to forge lives of integrity and purpose—resonates with the struggles of women today. Compelling, frank, and all too real, NOT OUR KIND kept me reading long into the night.” (Lauren Belfer, National Jewish Book Award-winning author of And After the Fire)

“NOT OUR KIND transports the reader back to 1947, to the heart of New York’s WASP-y Upper East Side.  Zeldis has written a powerful and page-turning account of what happens when Eleanor--smart, beautiful, and Jewish--is employed as a tutor by the troubled Bellamy family, and finds herself out of place in their world. Can the fox and the hound ever truly be friends? This engaging novel succeeds in putting a fresh, feminine spin on that question.” (Suzanne Rindell, author of THE OTHER TYPIST and EAGLE & CRANE)

“Kitty Zeldis is one of those rare writers who doesn’t just weave a story, she creates a world.  In this case, 1947 New York -- vivid, dazzling, challenging -- where a young Jewish woman dares to cross the line into the land of WASP privilege, with unexpected results. With deeply human characters and resonant themes, NOT OUR KIND kept me reading well into the night.” (Jennie Fields, author of Lily Beach, Crossing Brooklyn Ferry, and The Age of Desire)

“Rich, evocative, and atmospheric, NOT OUR KIND by Kitty Zeldis is the story of two very different women whose chance meeting changes both their lives in the late 1940s New York. Zeldis weaves a beautifully written story not only about class and women’s roles, but also about love, friendship, motherhood, and coming of age. I was absolutely captivated by this stunning historical novel.” (Jillian Cantor, author of Margot and The Lost Letter)

“Kitty Zeldis shakes open a map of postwar New York City and draws the reader right down onto its streets and into the lives of the women who walk them. Her characters button up their coats and march their way through that decade’s particular disasters—the polio epidemic, religious prejudice, class divisions, generalized misogyny—determined to locate power and happiness for themselves and the ones they love. Not Our Kind is a beautiful and compelling read.” (Adrienne Sharp, author of The Magnificent Esme Wells )

“A fun, absorbing read, Kitty Zeldis’ Not Our Kind takes place in post-WWII New York City. . . . the novel touches on religious and class prejudices as well as misogyny, a topic especially poignant in the #MeToo era we’re currently experiencing. . . . delving deeply into these issues set the stage for a personality- and drama-driven story. It is entertaining and captures the flavor of the city and class differences well. . . . Not Our Kind is an enjoyable read.” (Historical Novels Review)

Here, she tells us why she took a new name:

I’ve always hated my name.  I can’t tell you what it is, but I can tell you that when I started at a new school in fourth grade, the teacher looked at the supremely unfelicitous collection of syllables on the class list and asked what—not who—it was—that’s how weird it sounded.  I had to raise my hand and say, “That’s me.”   I had a chance to change it college—I had decided to use my middle name, which was less egregiously ugly—but though I filled out my forms with that other name, I didn’t have the resolve to follow through. Clunky and unlovely as it was, it seemed I was stuck.  Friends tactfully tried to change my view. They said it was distinctive. Memorable, I was told.  Yeah, right.  So was a two-headed cow.   Even now, whenever  I tell a new person my name, I cringe afresh.


Then a funny thing happened.  I’m a writer, and I began to publish under that unwieldy name.  I can’t say I liked it any better when it appeared on the covers of my books, and yet…it was mine.  It was distinctive, and yeah, memorable.  I guess I had made a grudging peace with it—even if I still cringed a bit when I had tell introduce myself.

But then after seven novels, the last four with the  same publisher, I had a big internal house cleaning.  New novel, new agent, new publisher and new start—with a new name too. My sales figures, less than robust, needed some goosing up, and this, according to the publisher, was the way to do it.  They were polite but firm—Not Our Kind was coming out under a nom de plume.


At first, I was kind of tickled by the idea.  I’d get to shed my ugly name—finally! Assume a cute, perky alternative, a name I wished had been mine from the start.  And because I chose Kitty, which was in fact a college nickname, I felt I recognized the name on the cover—she wasn’t a stranger.   I was totally on board with this decision.

Or was I?  After several months have elapsed, a bit of ambivalence has crept in.  And what’s that bittersweet feeling—regret? That old name I’d always hated was on the seven novels I’d written, novels I most emphatically did not hate.  That was also the name I’d used on the twenty-eight children’s books I’d written, some of them the recipients of awards and those coveted starred reviews in the industry publications.  One of them has sold close to 600,000 copies, a number that makes me proud.  And yet, because I am exiled from the name on those books, I’m exiled from those accomplishments too.

Not Our Kind was published on September 4.  HarperCollins is really enthusiastic about this book, and is putting some muscle behind it.  Thanks to their stellar PR department, I’m scheduled to visit a slew of cities and will be meeting and greeting new readers with my brand new name.  I can’t yet tell how it’s going to feel, and whether I’ll fully embrace the change or, with surprise, mourn it, even if just a little.