A boy who goes missing. A brother who won't stop looking for him. Reddit horror royalty Dathan Auerbach talks about his disturbingly brilliant new novel BAD MAN (and get a load of that guaranteed-to-give-you-nightmares cover!) and more. 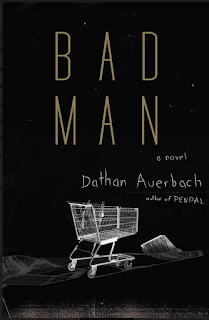 I love horror. I really do. And as soon as I saw the cover of Dathan Auerbach's novel BAD MAN, I knew I was going to be hooked. And I was, because not only is it so unsettling you might feel as if you have ants living in your heart, but it's also smart and gorgeously written.

In 2011, Dathan began posting a series of stories to a forum dedicated to horror. After a campaign that raised over 1000% of its goal, he was able to release the revised and expanded versions of his story as the novel Penpal.  His next work, Bad Man, is the love child of Dan Chaon and Stephen King, but don't take my word for it. Look:

“An atmospheric and unsettling novel. . . . Auerbach’s portrait of an after-hours grocery store—as benign a setting as one could imagine—takes on an aura of almost Gothic menace. Most importantly, his ability to convey the grief, guilt and sense of loss that fuel Ben’s fixation gives the book a resonant emotional center. With just two novels, Auerbach has established himself as a significant figure in the post-King generation of horror writers.”
—The Washington Post
“Auerbach cleverly weaves in the horror trope of creepy kids amid a vibe that’s best described as Stephen King meets Three Billboards Outside Ebbing, Missouri. . . . The novel is wickedly effective in creating a feeling of doom. . . . Bad Man delivers an unexpected gut punch and saves its darkest deeds for an unnerving end.”
—USA Today

“If you think The Shining set in a grocery store, you’re not far off. . . . Auerbach is magnificent with atmosphere, able to conjure dread from a huge array of normally nonthreatening places. This is a horror author to watch very, very closely.”
—Booklist

“Dark and disturbing. . . . Readers will be reminded of the young Stephen King.”
—Publishers Weekly

“This nasty little slice of Southern gothic. . .is a heady, puzzling, and oddly gripping exercise in depicting a small town as a macabre place filled with everyday horrors ranging from a child’s stuffed animal to a gruesome industrial accident. . . . Auerbach [keeps] readers on the edges of their seats for the whole ride.”
—Kirkus Reviews

I think the main question I had when writing the story was what’s the distant aftermath for a family when a child goes missing? I wanted to follow a person still walking a road long after they’ve lost their bearings. What does that family look like? What happens to a person’s mind when hope is made vestigial, but they can’t escape its grasp?

I think the answer was a bit surprising to me.  I knew the path that the main character Ben would walk, or at least I knew the way points. The scenery, though – the things he passes through and is transformed by along the way – that snuck up on me a bit.

The book totally unnerved me, and I mean that in the best way.  Was there ever a moment when you felt disturbed yourself?  When you forgot you were the writer and felt you were an inhabitant of this town?

The truth is this town is a real place and so is the store. You can find it if you know where to look. I won’t say that I ever wrote something that got under my own skin, but I know these places and these people, so there were definitely some times when it felt a little too real to me.

I think what makes Bad Man so terrifying is the casual nature of the horrors, the way things that happen could have other explanations (the freezer that locks itself made me half crazy, but they don’t.  All of this leads to the question, so what kind of writer are you? How did you write this? Was it mapped out? Or were you as surprised and terrified as the rest of us?

I love all kinds of horror. I’ll watch or read just about anything. When it comes to writing, though, I tend to be most drawn to more terrestrial things. Human horror. There are a bunch of reasons for this, some practical, most just matters of taste, but I think I’m always more interested in the things that people do and why they do them.

As far as how I approached Bad Man, most of it was mapped out in my head before I really dove in. I’m bad about using actual outlines, but I know the beats I want to hit and how I think I’m going to get there. Of course, there were some developments I hadn’t really considered at the outset that I stumbled upon as I went. Some characters wound up being way more integral than I had first conceived – the cop James Duchaine, to name one.

Those kinds of surprises are both fun and stressful. It’s great to find something knew and think, “why didn’t I see that or think of that before?” But that can also be alarming, because then you start wondering what else you overlooked.

You started out self-published on Reddit,  and became an instant hit. That lead to a Go Fund me for Penpal, which also was a hit.  I’m amazed at how you kept going—do you have this built-in belief system? Or was this a surprise to you?

It’s been a genuine surprise the whole way. People’s reactions. My own determination. Penpal started as one story that I wrote just for fun. It was the responses from people on r/nosleep that pushed me to write more stories and eventually revise them into a novel. At a certain point, and I was aware of it as it was happening, it became work. Not a slog or a grind – just something that was difficult and trying. I was surprised that I kept going when it would have been easier to quit while I was ahead. But I wanted to see it through, partly for myself, but mostly for the people who had been cheering me on. I felt like I owed it to them, since they helped me find and retain a kind of determination I didn’t expect I’d find in myself.

I think I’m between obsessions right now. For a while I was trying to hunt down vinyl pressings for the band X Japan, but I’ve taken a break from that because it’s full of slim pickings and devastating “almost got ‘ims.” It’s only a matter of time before that starts back up, though . . . as evidenced by the fact that I just opened up a new tab and searched Discogs while I was in the middle of writing this reply.

If I ever thought of writing Bad Man as a palindrome. The answer is obviously yes.
Posted by Caroline at 10:59 AM