Oh yes, the genius Thrity Umrigar talks about THE SECRETS BETWEEN US, class and women in both India and America, keeping our hearts open, and so much more 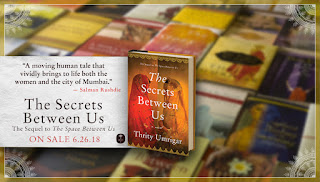 Before I knew and loved Thrity Umrigar, there were her novels. I reviewed The Space Between Us (which I adored), and she wrote to thank me, and we discovered we had so, so much in common and we became friends. (Of course, I cannot review her anymore now, it would be unethical, but I can interview her on my blog!) Not only is Thrity hilariously funny and an astonishing writer, she has a huge heart, a razor-sharp intellect, and a never-ending generous soul.

She's the author of Bombay Time, The Space Between Us, If Today Be Sweet, The Weight of Heaven, The World We Found and The Story Hour. She is also the author of the memoir, First Darling of the Morning.  The Space Between Us was a finalist for the PEN/Beyond Margins award, while her memoir was a finalist for the Society of Midland Authors award. If Today Be Sweet was a Chautauqua Literary and Scientific Circle selection, while her other books have been Community Reads selections. Thrity is the winner of the Cleveland Arts Prize, a Lambda Literary award and the Seth Rosenberg prize.     After earning a M.A. in journalism  in the U.S., Thrity worked for several years as an award-winning reporter, columnist and magazine writer. She also earned a Ph.D. in English. In 1999, Thrity won a one-year Nieman Fellowship to Harvard University, which is given to mid-career journalists. While at Harvard, Thrity wrote her first novel, Bombay Time.

Thank you oceans and oceans for being here, Thrity.


I always think there is a why now moment for an author to write any book. What were the origins of this one for you?

I had gotten requests from readers for over ten years for a sequel but I always rebuffed those because I didn't really have anything new to say about the two main characters.  But off and on, I'd find myself thinking about a very minor character, a vegetable seller who was a social outcast because of her bitter nature and because of a ugly-looking growth on her neck.  Parvati earns a living selling six cauliflowers a day.  How, I wondered, could she possibly earn a living doing this?  And what life events have laid her so low to have brought her to this point.

And then, one day about two years ago, I knew the answer to those questions. I saw her backstory and as soon as I knew that, I was excited to "introduce" her to Bhima, from The Space Between Us, and tell the story of two distrusting, embittered, marginalized women who learn to trust and even love one another.

How difficult was it to write a sequel?  What surprised you the most?

It wasn't difficult at all because it felt organic.  If I had done what readers have asked me to do for ten years--simply continue the old story, it might have been hard going.  But here was a book with not just one new character but three new characters, along with Bhima.  And Bhima's story itself is so fresh because she realizes how foolish she's been to not take advantage of the new, globalized India.  In many ways, it's the story of her inner journey from thinking of herself as a beast of burden to a full human being.

What surprised me most was Bhima's initial reactions to the lesbian couple she encounters.  Despite being the victim of society's scorn, she herself is scornful of their relationship.  I guess it taught me that victims are not automatically inclined to be sympathetic to other minorities, that for some, compassion has to be learned and developed.

So much of this gorgeous novel is about class and women, which makes it startlingly relevant to what is going on in America today. Could you talk about this please?

I think there are obvious differences in degrees between India and America when it comes to class and gender relations.  But just today, I heard that while India is the worst place in the world for women, according to a new study, the U.S. is the tenth worst place!  This feels inexcusable to me.  India is a poor country, with mass poverty, illiteracy etc.  But what is our excuse?

I don't think readers are going to use my novels to make an apples-to-apples comparison to conditions in the U.S.  But my hope is that the softening of the heart that novels can induce, will make people more alert to the injustices in their own backyards or can feel a sense of solidarity with my characters that's egalitarian and without judgement.  I don't want people to pity Bhima or Parvati.  I want them to think, "Aha.  I've had that thought or feeling, also.  We're not that different, after all."

I cared deeply for all the characters and want to know how you develop your characters?

I just spend a lot of time with my characters.  I go for walks with them, they accompany me into the shower.  I wash dishes with them by my side.  I hang out with them, carry out conversations with them.  I never worry about plot.  I'm just interested in their behavior and their values and am curious to see what they'll do next.

Nothing much.  Only the state of our democracy, the fate of the planet, climate change and who we will be as a people and a nation in five years time.  Nothing much at all.  But seriously, I'm equally obsessed with trying to figure out who I will become and who I am becoming.  Will the current political climate result in a hardening of my heart toward those with whom I have such ideological differences?  Or will I still be able to see their fears, their bruised hearts and recognize their humanity?

Did I hear you say, "What are you working on now, Thrity?" Ah, I'll tell you: It's another novel set in India that deals in a graphic way with the treatment of women there.
Posted by Caroline at 2:53 PM