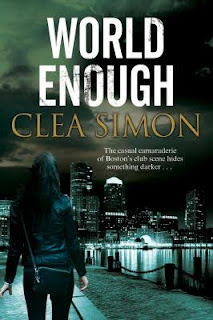 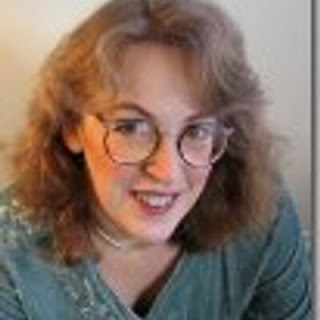 Oh yes, I first met Clea Simon on a website and we soon formed a fast friendship. We've been to each others' houses, held each others' hands through various personal and publishing disasters, and no one makes me laugh as much as Clea does. I've read all of Clea's books, from nonfiction like Mad House: Growing Up in the Shadow of Mentally Ill Siblings (Doubleday, 1997), Fatherless Women: How We Change After We Lose Our Dads (Wiley, 2001), and The Feline Mystique: On the Mysterious Connection Between Women and Cats (St. Martin’s Press, 2002).Her new, darker Blackie and Care mystery series starts with The Ninth Life and continues with As Dark As My Fur (Severn House).

The Theda Krakow mystery series was launched in 2005 with Mew is for Murder and continued with Cattery Row and Cries and Whiskers, and Probable Claws (Poisoned Pen Press).

Clea's new novel WORLD ENOUGH is unlike any of her other books. And I went absolutely nuts for it. She catapults you into Boston's burgeoning punk-rock scene. And I'm not the only one:

With a colorful cast of characters, a gift for detail, and intricate plotting, Simon takes her readers deep into the esoteric world of the Boston music scene.
– Lisa Unger

WORLD ENOUGH is excellent – a twisty, bittersweet trip back to the glory days of the Boston club scene, with just the right mix of edge and nostalgia.
– Joseph Finder

Thanks Clea and see you soon!

Why this book now?

I have two answers for that. The first is horribly prosaic: This is my 23rd mystery,  and my first mystery to not feature cats somewhere in the mix.  And on the most basic level, it came about because Edwin, the publisher of Severn House (which has published 12 of those cat books in two different series), wanted me to write something different. We were having drinks in Bristol, at the Crimefest conference, and he said, “Why don’t you write romantic suspense?” Well, this is not romantic suspense, by a long shot, but it did get me thinking of something outside of what I had been doing. Something darker, sans cats.

The deeper answer is that I was probably ready to write this book. I first started writing one version of it about 20 or 25 years ago, not long after my stint as a rock critic. I wanted to capture that feeling of excitement I remembered. I specifically recalled the feel of the frozen earth crunching beneath my shoes as I ran across the median strip toward the front door of the Rat so vividly – the brittle quality, the urgency, like the earth was rushing me toward the club. But back then – I’m talking early ‘90s – I had neither the distance nor the skills. I’d been writing professionally, both as a rock critic and a journalist, but I wasn’t a novelist yet. I kept reworking the first 100 pages and then it all just petered out.

Then, about ten years ago, I went out to hear a band I used to love and wrote a version of the opening scene. But still… I was writing mysteries by then, but even if I had started to develop the chops, I didn’t have the emotional distance.

So that first scene – which takes place ten years ago – was you?

Well, I was in a similar place as Tara, my protagonist. That’s probably why it took me another ten years to write! I needed to be well past that time, able to look back. Tara isn’t me, obviously. But she is in a place that I recall. She’s still nostalgic for “the scene,” and, of course, for her own youth. Over the course of the book, she gets some perspective.

But not just on the scene, I think.

No, I don’t think so. She unravels the mystery aspect – what happened and who was involved – but in the process, she learns to see herself and the people around her more clearly, too.

One of the comments about World Enough is that it’s about a middle-aged artist looking back on the scene. Does that make sense?

Yes, among other things. When we’re young, we don’t have a sense of limits – of where our art will take us or what it will mean if it doesn’t change the world. I like to think that as we age, we learn to value our arts simply for themselves. I mean, fame and fortune – or being able to earn a living doing what we love – would be wonderful. But do they still have value without these measures of success? Does their value change?

This is probably your first morally ambiguous book.

Yeah, more realistic, I guess. I mean, I hope that the ending makes the “what happened” part clear. But as to what will happen next for Tara … I don’t know.

What will happen next – for you?

I’m returning to cat mysteries for a while! I’ve got the next dark cat mystery (literally, the next book in my dystopian black cat Blackie and Care series) Cross My Path coming out next summer and another Pru Marlowe pet noir, Fear on Four Paws, scheduled after that (think snarky/funny amateur sleuth) – both are in various stages of editing and production. And I’ve signed with Polis Press to write a truly cozy series about the witch cats of Cambridge next. I think it will feel good to get back to whimsy and sweetness for a while. But, yeah, there’s another dark rock noir on the horizon. I’m taking notes and part of me is itching to get back there.

In another ten years?

No, this will be sooner than that! I promise!
Posted by Caroline at 1:36 PM