Want to raise thoughtful, wonderful kids? And have a gorgeous book to boot? Deborah Copaken and Randy Polumbo talk about THE ABCS OF PARENTHOOD 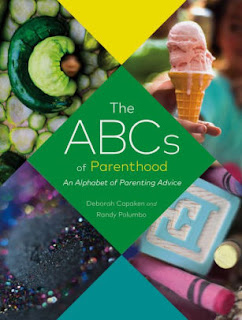 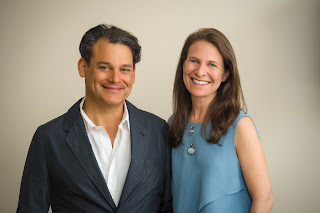 I first fell in love with The ABCS OF ADULTHOOD, with text by the amazing Deborah Copaken and photographs and design by the equally amazing Randy Polumbo ( Check out his web page.) And now they have a new, most wondrous book, THE ABCS OF PARENTHOOD.

I've always been a total fangirl to Deborah Copaken.She's brave, she's funny, she's incredibly smart, generous and creative, Her bio she wrote for her website is so funny, I'm letting it speak for itself here: Wrote bestselling Shutterbabe, followed by unpublishable drivel, followed by Between Here and April, Hell is Other Parents, and the New York Times bestselling The Red Book, which was nominated for the Women’s Prize for Fiction (formerly the Orange Prize); published essays in The New Yorker, The New York Times, The Nation, Elle, More, Slate, Paris Match, O, and others; shot photo assignments; produced and shot a documentary in Pakistan for CNN in the wake of 9/11; became a columnist for The Financial Times; performed live on stage with The Moth, Afterbirth, Six Word Memoir, and Eve Ensler’s tribute to Anita Hill; adapted Hell is Other Parents for the stage, starring Kate Burton, Sandy Duncan, Tovah Feldshuh, Julie Halston, and Rita Wolf; wrote several screenplays and a TV pilot that were never produced; watched Shutterbabe (the big and small-screen versions) languish in development hell; had another baby; lost appendix, uterus, father, Upper West Side home, bearings, socks, sanity, and several nouns; found Harlem, yoga, and occasional serenity. But not the socks. Or the whatchamacallit. Nouns.

2013-2015: The upheaval years; separated from husband and life partner of 23 years; sent the two eldest off to college; received a diagnosis of stage 0 breast cancer; got sucked into the vortex of job turmoil, twice, while single parenting the little one 24/7; seriously contemplated emigrating to Scandinavia; instead, moved across the street from the Inwood Hill Forest, the greatest city refuge no one in Manhattan has ever heard of; granted three miracles: 1) sold Shutterbabe as a TV series and was hired to co-write the pilot for NBC/Universal; 2) landed new full-time job plus three-book deal to co-create, with artist Randy Polumbo, a series of ABC books; and 3) love.

Thank you both so very, very much.


I always want to know the why now reason for a book? What was going on that made you feel, “Oh my God, I have to write this now, now, now.” (Psst, I know the answer, but readers will want to know--)

Randy and I sat down to map out the letters for this book (A is for acceptance, B is for boundaries, etc.) in the late summer of 2015, long before the current hate-filled rhetoric of a certain small-handed dictator man began filling our airwaves and twitter feeds, so it wasn’t a reaction to him or the news per se. And yet clearly, as my two eldest and Randy’s daughter were busy flying the nest; as we looked around at the competitive, helicopter parenting environment of New York, where getting your kid into the right college starts before preschool and escalates as they move through the years, we both felt that there was a real need for a book about compassionate parenting. About starting from a place of love and acceptance instead of blindly trying to mold your child into something they’re not. About embracing what we called the “J is for jazz” of parenting, meaning there’s no sheet music, no roadmap, no one best way to raise a child. About finding peace amidst the beautiful mess of glitter, dog hairs, and toys and finding joy in the small moments: a walk outside, an ice cream cone. I’m a big fan of Thich Nhat Han’s mindful essentials books (How to Love, How to Eat, How to Sit, etc.) as well as Buddhist tracts in general, although I wouldn’t call this a Buddhist book so much as a book whose roots are similar to those of Buddhism: kindness, love, empathy. I think we also felt we both knew what we’d done wrong or things we wished we could have done better as parents and wanted to impart that hard-earned wisdom.

You’re a critically acclaimed, majorly accomplished writer. But does every book- including this one—feel like a new book with new problems, etc. in it? Were you writing it differently at all? Did anything surprise you about the writing?

Absolutely! Each book is its own unique puzzle. What’s the voice? What’s the tone? How is it organized? This was the first book I co-wrote and co-shot. Randy wrote and photographed 13 letters, I wrote and photographed 13. But then, insofar as the writing was concerned, we each had ultimate editing and veto power over the others’ entries to the point where it’s impossible to point to any one sentence and say, “I wrote that,” or “He wrote that.” We wrote it, passing the manuscript back and forth over email—and then once, toward the end of the process, in person at Randy’s studio in Gowanus—and it was not always easy. We’ve been good friends for three years now, so we were able to criticize one another without worrying about hurting the others’ feelings, but we’re still human, and it was sometimes challenging for each of us to hear what the other didn’t like, even if we ultimately knew the criticism was valid.

Sending your kid off to college is one of the hardest things I’ve ever done. We see my son every few weeks, but realizing that your child is now an adult is mind-bending. And so is the way you give them advice, which is why I loved your book so much. It talks about what is important but in a way that respects young people. I also love that it’s a great little gift for adults, too.

I’m pretty sure you’re talking about our first book, THE ABC’s OF ADULTHOOD, here, so I’ll speak to that. I wrote THE ABC’s OF ADULTHOOD just before my own eldest left for college, so it was one of those from-the-heart, oh-god-I-can’t-believe-he’s-leaving mash notes from a mother to a child. But that book, too, started from a place of acceptance. So often I see parents trying to give advice to a young adult child that does not take into consideration who that child is. “You should go to law school!” is bad advice if your kid has no propensity for logical thinking. And trying to keep your college-aged student from ever drinking alcohol is a fool’s errand, but you can tell them to try an experiment of sobriety, just to see how it feels.

What was it like working with Randy Polumbo? Which came first, the prose or the image?

I feel extremely fortunate to have collaborated with Randy. He reminds me of a modern-day Willy Wonka, only less cynical, smarter and more grounded in reality. His studio in Gowanus literally looks like Wonka’s factory, and it was recently featured in New York Magazine. His compound in Joshua Tree, constructed solely from recycled materials, is, to my mind, the 8th Wonder of the World. But beyond his artistic brilliance, talent, and whimsy is a man who cares deeply about our world, about his fellow humans, about his daughter, about art, and about the future of our planet. His generosity is unbridled. I happened to mention to him, in passing, that I’d somehow lost my large-format, analog camera in the move from my marital home into my so-called “divorced lady apartment,” and that I would never be able to replace it, as it was an antique. A few months later, he presented me with a replacement he’d somehow magically found online. That’s just one instance of many. As for which came first, the prose or the image, the prose absolutely came first. Then we had to come up with an image to match. For example, the first one, the deformed apple for A is for Acceptance, was an apple Randy found in his own garden on his studio’s roof. It was oddly perfect in its imperfection: not only because the imperfection was in the shape of an A, but because most kiddie alphabet books begin with A is for Apple, so this is a beautiful subversion of that. The H is for helicopter is an h-shaped bit of fence in front of an actual helicopter at an army recruiting station near my mom’s house on the Delaware shore. The Q is for quilt (a rolled-up tape measure) was our editor, Christine Carswell’s, idea. The Y is for yelling I spotted around the corner from my apartment. The J is for Jazz is Randy’s daughter Nico’s saxophone atop his silver couch. In other words, it was a real joint effort involving thought, luck, and paying attention to simple props at home and the built and natural environment.

This hideous administration, for obvious reasons. Thawing permafrost, because I worry about the world my children will inherit. Healthcare, because my own health has been challenging this summer. And focused breathing, as a stopgap measure antidote to it all.