Can machines really be kind? Judith Newman talks about why we should all embrace weirdness and about her "everyone-is-going-nuts-for-it" book about her autistic son and his incredible relationship with Siri--To Siri With Love 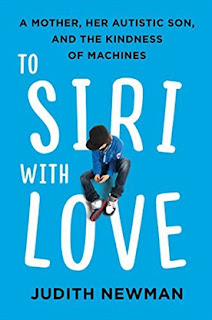 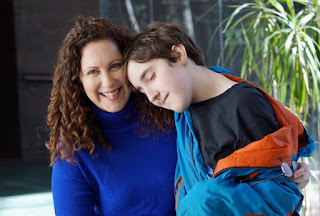 When my friend, the acclaimed journalist/author Sheila Weller tells me about a book, I always listen. She lead me to Judith Newman, who it turns out, I was already friends with!  To Siri With Love is an astonishing book about her son Gus, who is on the autism spectrum, and how Siri opened up his life. It's warm, funny, astute, and you need to read it.


Judith writes about entertainment, relationships, parenthood, business, beauty, books, science, and popular culture. Her work has run in more than fifty publications, including The New York Times, Vanity Fair, Harper's, The Wall Street Journal, Allure and more.  Newman's books include the 2004 memoir You Make Me Feel Like an Unnatural Woman: The Diary of a New (Older) Mother.


I'm so thrilled to have her here!  It's great when you love both the book--and the author, right?

I’m so happy you wrote about Gus, but what was the why now moment when you decided you were going to do a whole book?

Because someone asked?  Embarrassing but true.  I’m so frightened of rejection when it comes to a personal topic like this that I would never have gone out there and tried to sell a proposal if an editor in the UK, Jon Butler, hadn’t approached me first.  But I do feel now that this is a good moment for a book like this.  Even if I didn’t have an autistic child I might be reading it – because right now, given the prevalence of autism, we all know and/or love someone on the spectrum.

I love it that the book is a memoir made up of essays. I want to know why you used this form?

Originally I thought of a year-in-the-life kind of thing, but that was just unsatisfactory.  It seemed to me that there were very particular issues around family life and autism that leant itself to thematic telling.  That sounds high-falutin.  Basically I wanted to be funny and throw in a bit of science, so this is how I did it.

What does Gus think about the book? Did he know that you were writing about him?

I was just telling him yesterday, “Honey, people seem to really like the book I wrote about you” and he said.  “That’s great Mommy.  Do you know how many kinds of sea turtles there are in the Bahamas?”   So, safe to say, he doesn’t care.

There truly seems to be more awareness about autism. There is a new series Atypical, about an autistic teen-ager, which I think is pretty well done. Have you seen it? Am I wrong?

You’re not wrong, but I haven’t seen Atypical.  Maybe I don’t watch things about autism because I live it!

You also wrote about how adults could be unknowingly clueless or cruel, and how doctors could be judging (I bet because they had no good answers for you and didn’t want to dare imagine they might be at fault or that they simply didn’t know. ) If you could educate people, what would you want to tell them about responding to Gus?

Nothing!  I want people to be who they are, and let me work with my son to understand kindness and cruelty.  But I would say this to people who are neither kind nor cruel but a little fearful:  Don’t be.  My son might not be looking at you, but it doesn’t mean he’s not paying attention; he can just listen better that way.  (Well, usually.  He’s a teenage boy.  Sometimes he’s really not paying attention)  He might be hopping when he talks to you, but it’s just because he’s happy.  He might not get the joke  Explain it to him!  There is nothing wrong with information.  Most fear is caused by misunderstanding.  Plus:  weirdness is just funny.  Embrace weirdness

Our political landscape and, right this moment, Steven Mnuchin’s wife, Louise Linton.  She marries  my two very favorite qualities in a human being:  cruelty and social climbing.  Is there anything worse than a person who claims a posh background who is completely and utterly classless?

What question didn’t I ask that I should have? And what questions would Gus ask?  He wouldn’t ask.  He would tell you these things:  the temperature, the chance of thunderstorms, the types of sea turtles in the Bahamas (five --green turtles, loggerhead turtles, Hawksbill turtles and oh my god my eyes have glazed over now)),  and the news on ABC-7.  He reads us the headlines every night, and wants to discuss them, which is enormous progress for a person with very limited interests.  It’s because he wants to connect more with other people, people who, say, are not interested in, say, the eyebrows on Disney villains.   A few nights ago he was shouting from the other room that a ‘Prius was graping a teenager.’  a teenager.  A car?  And what’s graping?.   Gus pronounciation isn’t always so good.   I asked him to spell the words, and it turns out it was a priest, and he was groping.  That became a very different conversation.
Posted by Caroline at 2:48 PM