Anxious about the future? No matter your political bent, Gene Stone's THE TRUMP SURVIVAL GUIDE has a wealth of information on creating the America you want 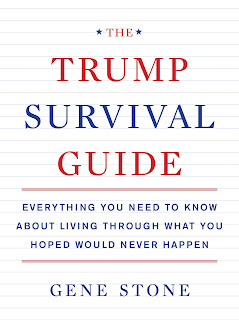 Book, newspaper and magazine editor Gene Stone has written a concise, calm, and very helpful guide about what we can and should do during a Trump presidency. What's great about the guide is he not only explains how things are, he also discusses how they were with Obama, as well as suggesting ways to take action. I'm thrilled to have him here.  Thank you, Gene. 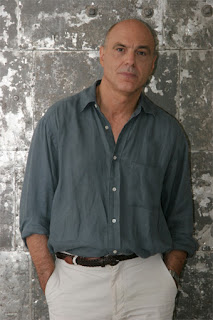 Why this book now? And why were you the person to write it?

Like many people, I was horribly dejected by the election outcome. I didn’t open the newspaper for the next two weeks. I avoided television news. I only went online to sites that might make me laugh. But after a week, I thought, someone has to sit down and write a quick book to help other people not only get through this pain, but help them rise out of it by offering advice on how to fight back. Wallowing in misery seldom solves the world’s problems.

As to why I thought I was the right person – well, I don’t have many skills… but I do think fast and write fast. In 2004, afraid that George W. Bush was going to win reelection, I wrote a book called The Bush Survival Bible in less than a week and it became a number one bestselling book. So I knew I had the experience to be able to call up a publisher and say, basically, trust me, I can write a book in less than two weeks.


I deeply admired your calm tone. How did that come about?

The tone was something I thought about for a long time (well, actually, a full day, which was all I had to be thinking about things like that when there are only a dozen days in a deadline). I wanted it to be measured and calm because I believe that frenzy and hysteria do not produce good results. But yes, I had to do a great deal of rewriting to rework those passages where I lost my equanimity and sounded shrill or frightened.

I don’t know many Trump supporters but I have run into a few online and their reaction is basically, I am an idiot, I am a traitor, I am a fool. Obama was the devil, Obama was the anti-Christ, Obama was a Muslim terrorist. Trump will save America, Trump will make America great again, Trump is a hero. There’s not much I can do with that. The fact is, however, that if these people read the book, they would see that this is not an anti-Trump book per se. It is an anti-Trump book if he chooses to follow a certain, dark path. I make it quite clear that we don’t know yet what kind of a president he will be. (However, his cabinet picks so far are not promising.)


When did you start writing the book and what was the process like?

I started writing this on November 19th and finished on the 29th. Luckily, I am something of a political junkie so I knew where to go to find more information. But I also hired seven friends to help write, research, fact-check, and copy-edit. I could not have written this book without them, particularly Nicholas Bromley, who has worked on other books with me and was invaluable to getting this one done.

I was trolled on twitter. I really do want to talk to people with different views than I have and to find something in common, but how is the best way to have a reasonable discussion?

I am terribly sorry you were trolled like that. But the moment we voice our opinions on line, we are immediately vulnerable: something about the Internet allows people to engage in their worst behavior. So it’s difficult to have reasonable discussions online, especially with people like the one you mention. Frankly, there’s probably nothing you could have said or done that would have made him or her adopt a more reasonable attitude. The only time people really seem able to do that is when they are forced by person-to-person contact to understand that we are all basically the same, humans struggling to make sense of our lives, the world, and whatever else comes up every day to confuse and baffle us. I have read some wonderful stories of people spouting bigotry and intolerance who for various reasons were put into situations where they had to interact with the objects of their hate, and after hours of honest and open discussion, did come away with a new, softer sense of what it means to be human. But that takes time, and effort, and most people simply don’t care enough. The best you can do is what you are already doing. Try to be kind and understanding, even in the face of hate. The last lines of my book are:

… more than working on an issue that concerns you, more than joining a demonstration,  more than signing a petition, perhaps the very best way to fight to keep this country a land of dignity and freedom is to show civility and support to all Americans, whatever their gender, race, creed, or color. When you buy your morning coffee from the Afghan man at the counter, or when you consult with your Estonian lawyer, or when you work with your South African accountant, tell them how much you appreciate what they do and how glad you are that they live here. Appoint yourself the ambassador for the America that you believe in.