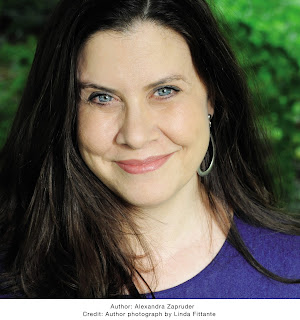 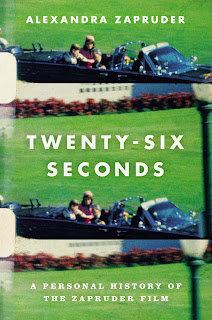 Alexandra Zapruder began her career as a member of the founding staff of the United States Holocaust Memorial Museum in Washington, D.C.  A graduate of Smith College, she served as the researcher for the museum’s exhibition for young visitors, Remember The Children, Daniel’s Story. She earned her Master’s Degree in Education at Harvard University in 1995 and returned to the Holocaust Museum in 1996.

Her first book, Salvaged Pages: Young Writers’ Diaries of the Holocaust, (Yale University Press, 2002) won the National Jewish Book Award in the Holocaust category. She wrote and co-produced I’m Still Here, a documentary film for young audiences based on her book, which aired on MTV in May 2005. The film was awarded the Jewish Image Award for Best Television Special by the National Foundation for Jewish Culture and was nominated for two Emmy awards.

Thank you so much for being here, Alexandra.

What would you have asked your grandfather if you could have?

The book is a page-turner, and a kind of thriller, too. How did you devise the structure of it?

I felt strongly that this book needed to adhere very strictly to a chronological structure.  This is because Kennedy’s assassination and, to a lesser degree, the existence of the Zapruder film set events in motion and it’s impossible to understand the reverberating effects of those events without seeing them in their time. I also wanted to trace the life of the film across the decades as cultural mores and technology changed. One of the most fascinating things to me is that the film never changes – it’s always the exact same twenty-six seconds – but everything around it keeps changing and interacting with it in radically different ways. This is what makes the story so wonderful – it had a natural arc and all I had to do was follow it.

The book is absolutely fascinating. Can you talk a bit about what you learned about your grandfather, the film, and the assassination that you didn't know before?
What didn’t I learn? I knew so little going into this that it was a massive education for me on every level. On a personal note, I really appreciated the opportunity to gain a much fuller, more accurate sense of who my grandfather was. He was such a special person and I always missed knowing him so it was wonderful to get to create a vibrant, compelling portrait of him. In terms of the film, I was truly stunned to realize how deeply imbedded it is in American life. I just didn’t appreciate its significance outside the JFK assassination community – the way it sparked new and provocative questions for the media, in the legal community, and for filmmakers, novelists, artists, among others. In many ways, learning about the film is like taking a crash course in the second half of the 20th century.

What was it like for you writing this book? Was there ever a moment when you thought, I can't do this?
There’s always a moment – or several – like that when writing a book, I think. In this case, the amount of research and the complexity of the material was very daunting, and there was such a steep learning curve that I definitely had moments of overwhelm. But the project was to take that huge amount of material and tame it for the purposes of this book, to stay closely focused on the film itself, and to trace the intersecting life of our family and the film in order to gain a deeper, new understanding of what the film means and why it matters in history.  And ultimately, I loved writing this book. It was not only that the subject is inherently complex and compelling in just the way I like history to be, but I also got to write about my own family, who I love very much, and think about our complex legacy. It was deeply meaningful to me, in the end.

What's obsessing you now and why?
Well, like the rest of America, I’m obsessed with the election, and not in a good way.  But by the time this is published, it will be over and hopefully we won’t find ourselves under the thumb of a demagogue.  On a more personal and private level, I’m bracing myself for the launch of this book and wondering what effect it will have on our family. Also, I had a deep visceral need after I finished the book to take a break from cerebral, brainy kind of work so I took a note from my 11-year-old daughter and started coloring. I found these gorgeous coloring books by a wonderful artist who focuses on images from a particular city, like Paris, or a country like Japan.  I have spent a small fortune on finding the perfect pens. I find it strangely gratifying – and very restful – to just make something uncomplicated and pretty.

What question didn't I ask that I should have?
How can readers learn more about me and my books? That’s an easy one. Go to www.alexandrazapruder.com.