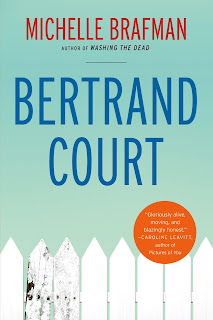 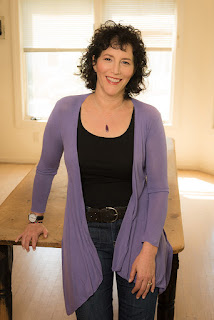 Michelle Brafman is the author of the novels Washing the Dead and Bertrand Court. Her writing has appeared in Slate, Tablet, Lilith, the Los Angeles Review of Books, the Minnesota review, and elsewhere. She teaches fiction writing at the Johns Hopkins MA in Writing Program and lives in Glen Echo, Maryland with her husband and two children.  Bertrand Court is published by the incredibly innovative Prospect Park Books and its force of nature, Colleen Dunn Bates.


Excerpt from “Shhh” in Bertrand Court:

You swim inside your mother’s womb, and the sound of her heartbeat lulls you to sleep, and you wait for Michael, the archangel who spoke to Adam after Eve bit from the apple, and to Moses through the burning bush. Now he speaks to you. He teaches you everything, the languages of the pelicans and dolphins and tigers and the names of the eighty-eight constellations. He tells you secrets. Your father Danny’s secrets, like stealing Playboy from his bar mitzvah tutor’s briefcase, and your mother Hannah’s secrets, like stealing Aunt Sylvia’s spoon. You learn the names your parents give each other when they fight and when they love, and the names they gave to the babies that preceded you, Ruth, Zeke, Jacob, and Sylvia, the two who never made it past the first trimester and the two who did.
You know that the Jewish folktale about Michael is true, that he will speak to you for the last time seconds before you see your first glimpse of fluorescent hospital light. “Shhh,” he’ll whisper, pressing his cool, dry index finger into the island between the base of your nose and your upper lip, forming a valley dividing two tiny mountains of raised skin. And all that knowledge? Gone. You’ll have to relearn everything. But while you’re still inside the belly, you’re smarter than Aristotle or Einstein or Voltaire or certainly your parents, who in an effort to birth you are behaving badly right now.

Thank you so much for being here, Michelle!

I’m always curious about why a writer needs to write a certain book. What sparked you in writing Bertrand Court?

Although I was unaware of this at the time, I needed to write Bertrand Court because I can be pretty judgmental, and I wanted to try to understand and embrace the juicy inconsistencies that make us all human. The novel in stories form allows me to show my characters at their worst, best, and also as neutral bystanders to the drama that unfolds on Bertrand Court, a suburban Washington, D.C. cul-de-sac. For example, the same character who steals the family silver in “Sylvia’s Spoon” appears as the emerging matriarch in both “Skin” and “Ladies Night.” A wise poet friend commented that we all possess an inner cul-de-sac, meaning a cluster of selves that represent disparate parts of our personalities. I wish I’d thought of that! This metaphor absolutely conveys a truth I hope comes out in the book.

Perhaps the “how” relates back to this notion of coming to terms with the beautiful and ugly pieces of ourselves, and in turn others.  The “why” pertains to the stakes.  What is the cost of judging the people we love? For example, in “Two Truths and a Lie,” in the aftermath of their father’s death, two sisters, the screw-up and the golden girl, play a game that demands they shuck these tired family labels and truly see and be seen by one another. In most stories, the characters are forced to accept that life is pretty darned lonely without the very people who can make you nuts.

I’m always interested in the creative process. What kind of writer are you? Do you have rituals, use note cards, depend on chocolate and coffee?

Walking is a vital part of my process. I need to move in order to think, apparently. After I arrive home from a walk, I’ll try to sprint to my computer and download my ideas. Talking helps too, depending on where I am with my draft. If I’m not cracking a character, I will describe him/her to either a friend or my husband who will indulge me by listening and asking smart follow up questions.

I absolutely love the whole structure of the novel, 17 different narratives from the diverse inhabitants of a Washington D.C. Suburb. Did you always know that that was going to be the structure? What were the problems—and pleasures—of tracking your characters?

Thank you! In the beginning, I wasn’t aware that I was writing a book. I wrote one of the first stories, “The 42,” about a pregnant woman who returns to the urban neighborhood of her single years and encounters an old lover. Then, I wondered what this encounter meant to her ex, so I wrote his story, “Ripe.” Of course, the woman’s overprotective husband spots them, so in “January” I tried to figure out why he was so terrified of losing her. My curiosity led me to create an entire cast of characters who were crossing in and out of each other’s lives.

I suppose the biggest challenge of this form is that it requires endless backstitching. Every time I wrote a new story, I learned more about the characters who were linked to it. Sometimes this meant that I had to alter a specific detail about their family history or even appearance. It was tricky to create an internal consistency to this world, yet stay open to what each story would yield. I also ripped apart the book and sewed it back together several times because I wanted to make sure that the links between characters felt as real to the reader as they did to me. The deeper I penetrated their individual lives, though, the more inevitable and surprising their connections became.

I’m not so sure you should have asked this question, but I know readers will. Are any of these characters based on me? And the answer would be that there’s a piece of me in every single character, from the dried up politico who substitutes triathlon training for the daily rush of power to the lost heiress who steals her neighbor’s tallis in order to find a soul. I agree with my poet friend, we are all cul-de-sacs unto ourselves.
Posted by Caroline at 10:07 AM