Kelly Simmons talks about ONE MORE DAY, writing three novels at once, her pie obsession, and so much more 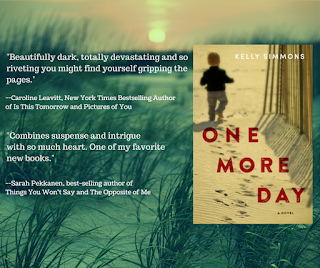 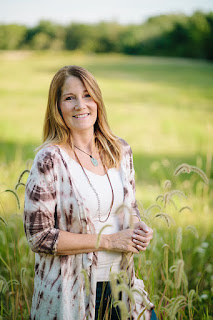 Kelly Simmons is a former journalist. In addition to her critically acclaimed novels {STANDING STILL, THE BIRD HOUSE and ONE MORE DAY} she is developing a TV series and has been writing a memoir for what seems like her entire life. I'm so thrilled to host her! Thank you, Kelly.

I always want to know what was obsessing or haunting you that compelled you to write this novel, so please talk about that.

After my mother died, I started to think a lot about death and reincarnation and ghosts, mostly because my sister kept saying things like, "Oh a cardinal came to my window and I know it was Mom."  And friends said things too --  like that their grandmother always "sent" them dimes to find in odd locations.  And I was pissed, you know,  because I would have LOVED to have had more chances to feel my mother's presence.  It seemed that a lot of people not only believed, but had access to another realm that I did not.  Plot ideas rattled around my head for awhile, until I came up with the idea of a young woman with a kidnapped son who is returned to her for ONE MORE DAY.

I always think that each new book changes a writer in some way.  How do you feel changed?

What a great question.  The book has a plot thread dealing with religion, and the more research I did, the more I realized how underrepresented conservative religious characters are in fiction. There is quote-unquote Christian fiction, but in the mainstream (Marilynne Robinson aside, not that she's mainstream, she's a goddess who could write anything) you don't see it that often. I had never noticed this before, nor fully understood how, depending on where you live and how old you are -- how being Christian could be expected --or mocked.

I admire the way the book is plotted and how you ease out the tension and suspense. Was there ever a moment when you felt, oh no, I can't go there, or I can't write this?

Um . . . every day? Seriously, the concept of this book repeatedly stretched me.  I'd never written anything centered around a crime.  I'd never written anything remotely supernatural, or that moved like a thriller.  It's still quite solidly a book about marriage and motherhood and community -- which is comfortable territory.  But I had to write softly about very difficult, even gruesome things.

This is your third novel, and I always feel that writing a new novel is like starting from scratch, that the lessons from the last novel don't apply anymore. Is this true for you? What kind of writer are you? Did you outline or just follow your muse?

Some books flow easily and some don't. Usually the first draft goes smoothly and the revisions bring me to my knees! I definitely have gotten better at exploiting my strengths and patching up my weaknesses, but yes, each novel is its own weird little animal that needs different care.  I am a person who outlines a little, not a lot, but makes lots of notes and lists, so I have a sense of the path.  But I have to allow myself freedom to go ski through the trees now and then.

I have three half-novels that I've written in the last two years -- and I really need to figure out which one to finish. It's like dating three guys simultaneously, something's got to GIVE!

People who know me online often ask why I am obsessed with pie in my social media posts.  And all I can say is who doesn't love pie? Pies are the new kitten videos.