Charlie Smith talks about his heart-scorching new novel GINNY GALL, writing about a black man and being white, research, basketball and so much more 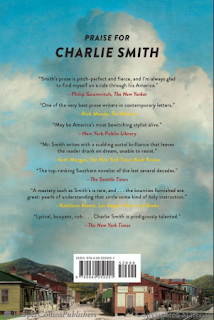 Prepare to be amazed. Charlie Smith has written one of the most extraordinary, gripping, harrowing novels of the year. (Check out the praise on the back of the book above.) His eight poetry collections include Red Roads, selected for the National Poetry Series and Great Lakes New Poets Award; Word Comix , and Headlong . Smith has also published seven novels, among them Cheap Ticket to Heaven, Chimney Rock, and Three Delays , as well as a collection of novellas, Crystal River.

What sparked this particular novel?

My novels generally start with an image that sticks in my mind, a mental snapshot that fascinates me so strongly that I want to find out what is going on—in this case a picture of a young man, a black man, riding on top of a boxcar on a long freight train passing a country zoo.  I wondered who he was and where he was going and what generally he was up to, where the zoo was.  It was late summer or fall in the South.  The light was a dusty gold.  The young man had a look on his face of loneliness and anticipation—of eagerness and curiosity.  The novel grew from that picture.

Did you find it daunting at all, as a white man, to write about a black man?

I didn’t so much worry about being white and writing about a black man as I did about how to get as deeply as possible into Delvin’s heart and the hearts of the other characters.  The things we crave are pretty simple: we want to love and be loved, to express who we are and be treated with dignity and humaneness, we all get scared and want to laugh and hook up with others—these are the same whether we’re black or white.  Novels are acts of empathy (unless they are simply forms of personal memoir) and that’s the hard part.  Letting go and descending into the heart.


How did you go about crafting a character as rich as Delvin?

From the start I sensed in Delvin a buoyancy and a voyaging and a yearning.  I was interested in writing about someone like that.  My other novels are all long prose tragedies, but from the first I knew this book would be different.  Also, the book ends with a beginning, so no telling what’s coming.


Was writing a novel different than writing poetry? Did one form inform the other?

I’ve published eight novels and a collection of three novellas.  I’ve published eight poetry books, including a selected poems.  I’ve always done both.  Both captivated me from the start.  I switch from one to the other as the occasion demands.  I like the compression and passionate speech of a poem, the long haul and characterizations of a novel.

Tell me about the research you did. Did anything surprise you?

I didn’t do much research.  In writing a novel I set myself the task of imagining characters and a world—that’s the fun of it.  As a southerner—one who left the South when he was young—some of my background was useful to me.  I was aware of the Scottsboro Boys, but beyond the facts that could be set out in a single sentence I knew nothing about them.  I wanted to imagine this child and young man’s story.

My next novel is the story of a professional (NBA level) basketball player and his wife, a mathematician, nuclear scientist and near Olympic level swimmer, told in points of view alternating between them.  Takes place around the country and around the world.