Hate your frizzfest hair? Shaved your head from illness? Long for the kind of locks you just don't have? The great Elizabeth Benedict talks about Me, My Hair, And I, and the best haircut she's ever seen, plus much more


Elizabeth Benedict is a fabulous editor (I know because of the brilliant edits she did on an essay of mine.) A wonderful writer. Warm. Funny. Smart. And she has a great head of hair. Her new anthology, Me, My Hair, And I,  is racking up the raves from People, PW, Kirkus, and BookRiot, and mentions in Sheen Magazine and on many blogs. In advance of publication, a number of essays are appearing in major magazines and on websites, including Vogue.com, Harper's Bazaar (August issue), Saturday Evening Post, and Quartz. com. She'll be at the Barnes and Noble on 86th on October 1, and what are you waiting for, you know you want to go!

Liz is also a bestselling novelist, journalist, teacher of creative writing, editor, and writing coach. She has published five acclaimed novels, including the bestseller Almost and the National Book Award finalist Slow Dancing, a classic book on writing fiction, and hundreds of reviews, essays, and articles. She is the editor of two acclaimed anthologies, the New York Times Bestseller What My Mother Gave Me: Thirty-one Women on the Gifts That Mattered Most (Algonquin 2013) and Mentors, Muses & Monsters: 30 Writers on the People Who Changed Their Lives (Simon & Schuster; SUNY Press). I'm so thrilled to have Liz here--and now I am off to obsess about my hair! 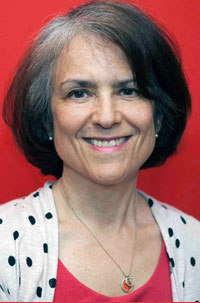 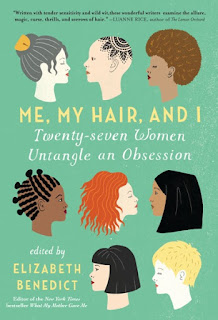 What is it about hair that instantly starts a conversation with women?

ANSWER: Everything. The color, the texture, the length, the new beauty salon, the old salon, the hairdresser, the hairdresser who got away, how we think we’re supposed to look in contrast to how we do look and how our sister/mother/daughter thinks we should look, and how we used to look, and how we still haven’t gotten over all the years when our hair was … well, you get the picture. My sister likes to say that “hair is everything.” It’s about grooming, beauty, vanity, sex, mortality, and on and on. It’s also public in a way that other body matters are not. I have a very close friend who is extremely polite in every way but we sat down for dinner after not seeing each other for a very long time, and the first thing she said was, “You’re hair’s too dark.” She would never have said that I’d gained weight, but she had no qualms discussing what she thought was wrong with my hair. It was pretty funny. And she was right, of course, which I already knew because my sister had told me.

And why do we women always go through periods when we want exactly the opposite of the hair we have at a certain moment?

Hair is the easiest element of our appearance to change. Yes, you can get a facelift or a nose job but you can get a haircut for $40 on your way home from the gym and make a stab at becoming someone else, because we all know how tiresome it is to be whoever we are. Hair is so central to one’s appearance, changing it in some dramatic way can be like getting a major makeover without anesthesia. Also in their favor is that hair changes are not permanent, so if the new color or style is terrible, it can be remedied, so why not give it a try and give into our desire to try on another identity?

Hair seems to have a say in just about everything, from a woman cutting off her hair after a tragedy, to someone finally loving the frizz and freeing her life, and what I love so much about this book is that hair is serious business. It matters. It creates turning points: an orthodox women who has been wearing wigs, finally takes hers off; a woman with cancer finds renewal as her hair grows in.  And I think reading this essays changes the reader, too. How did putting this book together change you? The way you think about your hair? And other peoples’ hair?

I have never been good at the beauty and fashion part of life. It’s a little embarrassing to admit quite how bad I’ve been - my sister can fill you in on it. The short answer to your question is that spending all this time with the book has caused me to change nearly everything about my hair. My essay for the book is about my refusal to go gray, but as the book was being copy-edited, I made the decision to go gray. (Actually, my hairdresser inadvertently made it for me when he dyed my hair black by mistake, and I was so annoyed that I decided it was time to stop dying it altogether rather than spend six months and hundreds of dollars undoing the damage. I may make another decision by the time the book comes out, so please don’t hold me to this). As part of the book research, I studied a spread of hair pictures in a magazine and decided I would let my hair grow, and as part of this “new me” attitude, I changed the part in my hair, and it made a huge difference in how my hair falls around my face. Suddenly people were saying how great my hair looked. It was all pretty startling, especially because all the changes were free things I did myself, not a fabulous new haircut with a fabulous new hairdresser. I saw my sister the other day after a long absence, and my hair is now much grayer and longer than it was the last time I’d seen her. I assumed she would want to know when I was going to get it colored and cut again. I’m still surprised that she thought it looked terrific.

On another note, I was having dinner with one of the contributors to the book, and she told me she had gotten her hair done because she was going to see me. I tried to explain that I didn’t care about hair that way. I think it’s fascinating to dissect culturally, historically, emotionally, and every other way, but the last thing I want to be is a hair judge. I want women to accept their hair the way it is rather than feel they have to meet some external standard of beauty. Grace Paley once asked, “Who’s the boss of beauty?” Women find a lot of beauty bosses - and maybe we don’t need quite so many.

How did you go about choosing the essays? There must have been an overload of women wanting to write an essay!  And did you consider men?

The publisher and I came up with various lists of names and issues we wanted covered. The publisher didn’t want me to ask women who’d contributed to What My Mother Gave Me, which is why you didn’t hear from me. Some were writers I encountered in my teaching life at the NY State Summer Writers Institute (Honor Moore, Siri Hustvedt), and some I knew had interesting stories that related to their hair (Suleika Jaouad, whose blog in the Times was about her cancer treatments in her early twenties; Deborah Feldman, who left the Hasidic Satmar sect; Myra Goldberg, who adopted a biracial daughter and had to figure out how to groom her hair; and Deborah Hofmann, whose husband shaved his head in solitary with her before her cancer treatments began), and a few writers I could see in photographs just had really good hair (i.e. Rebecca Goldstein, Emma Gilbey Keller). And Anne Kreamer, who has a fabulous head of gray hair, and who wrote an important book called Going Gray. She’s been my going gray guru. No guys were invited to be part of this conversation. Since when do men want to talk about their hair for hours - days - on end?

It has something to do with sex but I can’t say what in public. Not yet, anyway.  What question didn’t I ask that I should have?

If you could have any haircut, whose haircut would you have?

In a very grisly TV series, Prime Suspect, Dame Helen Mirren plays a detective solving horrific murders of young women, and in every episode she has the best haircuts. My inability to describe them is the result of a lifetime of failing grades in fashion and beauty, so just google some photos and you’ll see what I mean. She plays a convincing detective, except that no detectives can afford weekly £200 haircuts.

Thank you, Caroline!  XOXOX
Posted by Caroline at 2:42 PM