The astonishing Stewart O'Nan talks about West of Sunset, Fitzgerald's last years, the Golden Age of Hollywood, and so much more

Stewart O'Nan is a genius. He's the author of some of my favorite books on the planet, including Emily Alone, The Odds, and now his latest, West of Sunset, an extraordinary novel that focuses on the last few months of Fitzgerald's life, as he struggles to find his footing with Hollywood, Zelda, Scottie, and Sheila Graham. Everyone from The New Yorker to the Boston Globe revered the book--and so did I. I'm always happy when I get to talk to Stewart, so this is really a pleasure post for me, and his answers formed an essay, which also made me happy. A million thanks, Stewart! 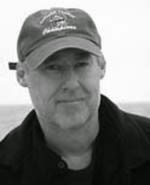 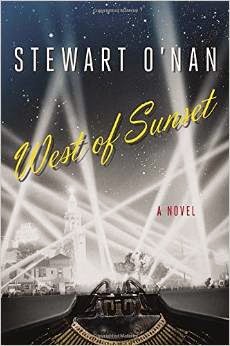 I wanted to write a lush, romantic book but at the same time have that fear of pennilessness always with Scott.  That's the split I see there:  it's the Golden Age of Hollywood, and everyone around him is famous and rich--Dorothy and Alan are fresh from co-writing A Star is Born, Bogie's on the cusp of stardom, S.J. Perelman's writing the classic Marx Brothers films, Ernest is the most famous writer in the world, and here's Scott, and they all know from his Crack-Up essays in Esquire that he's dead broke and trying but continually falling off the wagon.

In several ways he's a fish out of water in Hollywood, which is what he was his whole life.  At least at The Garden of Allah, he's surrounded by friends who've known him since 1920 back in New York, and who know how talented he is, and what a sweetheart he is when he's sober, and how hard it's been for him since losing Zelda.  Before this, in North Carolina, he was living alone in hotels and drinking his days away, borrowing money from Max & Ober.  Now he's got a shot at fulfilling his responsibilities and getting out of debt.  All he has to do is hang on to a job, and while he has his ups and downs out there, ultimately he manages to pay off everyone he owes and even has enough to buy the time to start on The Last Tycoon.

What surprised me the most in my research was that he worked on Gone With the Wind.  I had no idea.  Or that he wrote a screen version of Babylon Revisited and had a meeting with Shirley Temple and her mother about it.  Or that at the same time Dorothy Parker, Aldous Huxley and James M. Cain all worked on the same floor there in the Thalberg Building at MGM.  Also that Scott was on the lot while they were shooting The Wizard of Oz.  Or that Joan Crawford specifically asked for him to be her screenwriter on several projects.  Or that he went to the Oscars one year.  That he had to hock his car to pay rent.  And all the nightclubs and restaurants, the months Sheilah arranged for him to live on the beach in Malibu in what was then called the Movie Colony, their initial dinner with Scottie, their trips to Catalina.  And of course all the amazing settings there in L.A., from the old back lot to the Palisades to the drought-stricken valley.  The scenery's big and elemental.

When we think of Fitzgerald, we think of the writer or the alcoholic, the romantic, but he was also a husband and father.  He was terrible with money, and from 1924--before Gatsby!--till his last years in Hollywood, he was constantly in debt.  Yet he never neglected his responsibilities to his family.  When Zelda is first hospitalized in 1929, he becomes in essence a single parent to Scottie, and does his best to provide for her.  And though, by the time the novel begins, Zelda's been in Highland Hospital for several years, she's still the most important person in his life.  As I say in the book, he would never deny that they were meant for each other, even as he recognizes that she's deeply ill.  He's still devoted to her, though in most respects their marriage is over.  Impossible as he knows it is, he wants to somehow repair the damage that's broken the bond between her and Scottie, and arranges for them to take family vacations during Zelda's furloughs from the asylum.  He keeps trying to do what's right in an impossible situation, and eventually it breaks him down.

Bogart and Mayo Methot serve as a bit of a chorus.  They were famous for their drinking and fighting at the Garden of Allah, and I thought they'd be a good foil--along with the other odd couple of Dottie and Alan--for the brand-new couple of Scott and Sheilah.  Their wisecracking helps undercut the melancholy, and reminds the reader of the blending of the real and movie worlds that's taking place there.  Bogie's voice came naturally to me, since I've seen everything he's been in--and I think it's familiar to many readers as well.  For how the two banter, I borrowed the style of The Thin Man films.

No secret to how I write:  slowly.  9 to 5, and I try to get a single double-spaced page a day.  Try to hold onto whatever moods the POV characters are in and follow whatever direction the action is going.  Stay close, just try to understand what's on the characters' minds, what's important to them.  Sit there and try to figure out what's next.  Patience is all.  And knowing you're going to fix it later anyway.

Right now I've just finished a new novel about Jerusalem in 1946.  It's about identity and political violence and fear and trust.  So now I'm obsessed with starting something else.  Stephen King says a book takes you away, and that's what I'm looking for, a new project that will take me somewhere unexpected, somewhere I've never been.

Thanks again for all your kind words, and for taking the time to have me on the blog.  Now I'm off to Pitt-Greensburg to sing for my supper.

Stewart
Posted by Caroline at 9:51 AM