Jonathan Odell talks about the inspiration for his incredible novel, Miss Hazel and the Rosa Parks League

“Jonathan Odell can take his place in the distinguished pantheon of Southern authors.”
–Pat Conroy

“Here it comes---barreling down the track like a runaway train, a no-holds-barred Southern novel as tragic and complicated as the Jim Crow era it depicts."
Lee Smith 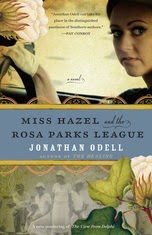 Jonathan Odell's novel, Miss Hazel and the Rosa Parks League is a tale of two mothers, in pre-Civil Rights Mississippi, one black and one white, but it's also the story of a most unlikely friendship. I'm thrilled to have Jonathan here talking about the inspiration for one of his characters, Miss Hazel. Thank you, Jonathan! 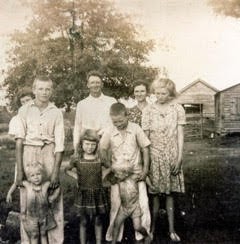 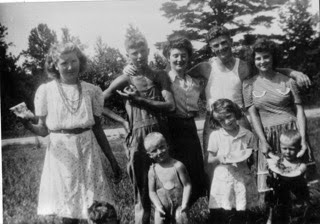 The inspiration for Miss Hazel, the major character from the book, came from an old black-and-white photo, one of dozens in the fruitcake tin we called “the picture box.”  It was a treasure trove of old-time photographs of grownups in ancient dress, children more grim-faced than their years, and several mules. My mother’s side of the family, as poor as they were, had been fervent picture takers. When I was a child, I would randomly pull a picture from the box and say, “Tell this one, Momma,” and she would narrate the story of our family.
I remember choosing one particular photo that disturbed me. It was a family portrait from the 30’s. All 14 of them were standing and squatting and kneeling in front of an old paintless barn. But I couldn’t find my mother.
When she put her finger on a gawky, half-starved child, I gasped. The little girl’s hair was dry, brittle looking, like a straw. Her dress ill fitting and shapeless, faded. Too short for her spindly legs. Her back was stooped and shoulders slumped. Her eyes cast downward, her head bowed, seemingly in shame, as if already knowing the insult the developed photograph would bring. At age twelve, she looked defeated.
“Momma! That can’t be you! You’re so pretty! This little girl looks starved and about to die.”
Momma laughed. Then she pulled out another picture from the box. “See if you can find me in this one.”
It was another family shot, and I recognized Momma immediately. The transformation was remarkable. She was looking directly at the photographer. She has an air of sassiness, maybe even flirting with whoever was taking the picture. Her sisters look uneasy next to her. She was acting the movie star.
She held her finger provocatively to her full lips, as if at that moment savoring something exotic, something the farm-hardened family around her could never be aware of. Something indeed had changed. This was the mother I recognized, the pretty, flighty one.
“What happened, Momma?”
“I just decided I wasn’t going to be ugly no more,” she sniffed. “Course they all hated me for it. But I didn’t let that stop me. I picked extra cotton to buy freckle cream remover. I made a leather harness to straighten-up my back, and I stole eggs to wash my hair with. They all called me Little Miss Priss. Said I was getting above my raising. I didn’t pay’em no mind.”
Years later I was able to see something in that photograph I hadn’t noticed before. It was the way the skin-and-bones girl held her right hand. The fingers themselves are tensed, rigid, almost claw-like, as if they are preparing to grab hold of something in a death grip, and never let go. The hand is the only thing about this emaciated child that looks as if it hasn’t completely given up hope, as if something inside her, when pushed to the wall, would put up one hell of a last fight.
My mother’s obsession with beauty and fine clothes was not mere vanity. It was an audacious strategy. For a girl raised in the bone-crushing poverty of the 1930’s South, there were few options to escape the fate of the farmwives who peopled Jasper County, Mississippi. Mother decided her only hope  was to find a man who thought she was pretty enough to get her the hell out. She did.
That was the story I wanted to write. About women like my mother, white and
black, whose spirits refused to be broken by poverty, violence or oppression, and took
any avenue, no matter how irregular, to save themselves.
Posted by Caroline at 3:20 PM