Jane Ciabatteri talks about the reissue of her stellar collection, "Stealing the Fire," from Dzanc reprint, being optimistic, writing, and so much more 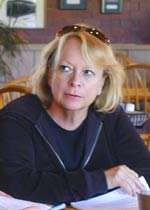 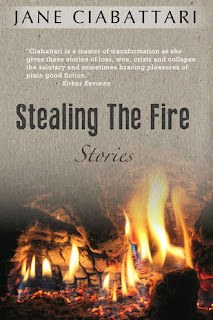 Jane Ciabattari is one of the shining names in literature. Really. Not only is she a stellar writer, but she is also the Vice President/Online of the National Book Critics Circle, in charge of the Critical Mass Blog and her articles and reviews have appeared in the New York Times Book Review, the Guardian, NPR.org, The Daily Beast, The Los Angeles Times, and more. She's been awarded fiction fellowships from the New York Foundation of the Arts, The MacDowell Colony, and more, and she's been associate faculty at Bennington's Low-Residency MFA program and she was Distinguished Writer in Residence/Visiting Professor of English at Knox College and also has taught at Columbia University's Graduate School of Journalism. And, she's one of the smartest, most interesting women around.

Her short stories have been published in Long Island Noir, edited by Kaylie Jones (Akashic Books, 2012), The Literarian, the online publication of the Center for Fiction (edited by Dawn Raffel), KBG Bar Lit, LOST magazine, Chautauqua magazine, Literary Mama, VerbSap, Ms. Magazine (nominated for O.Henry and Pushcart awards), The North American Review, Denver Quarterly, Hampton Shorts (which honored her with an Editors' Choice Award), The East Hampton Star, Blueline, Caprice and Redbook, which nominated her for a National Magazine Award. Her story "Payback Time" was a Pushcart Prize "special mention." Her story "How I Left Onandaga County," appears in the anthology "The Best Underground Fiction" (November 2006,Stolen Time Press) and also was a Pushcart Prize special mention, as was her story "MamaGodot," which appeared online in Verbsap and in the summer issue of Chautauqua magazine.

Dzanc Books has started this truly innovative ebook reprint series, along with Open Road Media, where they reprint books by such authors as Ellen Gilchrist and me (my first four novels will be out around September.)  "Stealing the Fire" is just out and the notoriously cranky Kirkus Reviews raves: "Ciabattari is a master of transformation as she gives these stories of loss, woe, crisis and collapse the salutary and sometimes bracing qualities of plain good fiction." Watch a video about the book here.

I'm thrilled and honored to have Jane here. Thank you so, so much, Jane!

I think what Dzanc is doing with the rEprint is really an exciting new venture in publishing because it really does give books a second life in a very accessible way. How does it feel to have your collection now back into print? Did you reread the stories and do they feel different to you now? Has the meaning changed at all?

It feels great. Dan Wickett was in touch out of the blue, with word they wanted to include Stealing the Fire as a selection in the Dzanc Books rEprint series. I was startled and honored.  It’s just a thrill. I’m in great company in the series—Nadine Gordimer, T.C. Boyle, Elizabeth Crane, Ellen Gilchrist, Abby Frucht, Stephen Dixon, Kelly Cherry, Gina Frangello,  Dawn Raffel, and on and on. And I understand you are a Dzanc author, also? (Caroline's note: YES!  Wait until September, when four of my backlist will be reissued.)

Stealing the Fire was published a decade ago by a wonderful small press, but had no distribution. I had wonderful pre-publication reviews, but no books in the stores. So it’s great to have this opportunity for the book to be available in an inexpensive form with super distribution (Open Road Media is the new Dzanc Books distributor.)

Rereading the collection now was like encountering old friends. I have a better understanding of their flaws, their foolishness, their blind spots.  And happily, I still care about them.

What was it like to write the collection originally? What sparked it and did you always intend for the stories to be based around one theme?

I started writing the title story after I finished graduate school in the late 1980s. I studied creative writing at Stanford, and then went to graduate school to study writing at San Francisco State at night, while working full time as managing editor of the San Francisco Examiner & Chronicle. I studied with a marvelous man named Herb Wilner, who died after heart surgery. He was a huge influence on many of us (a group of women from his workshop, including Molly Giles, Jane Vandenburgh, and Susan Harper, were in a writers’ group for years afterward).  The title story,“Stealing the Fire,” is an attempt to come to grips with the influence a mentor can have on a young writer, in this case a young woman. I fictionalized it, of course, but that’s the impulse behind the story. For a woman to write as powerfully as a man, to be considered equal as an artist, felt like a taboo that had to be confronted, and that, it seemed, took courage. Hence “stealing” the fire. I set the story in San Francisco and Squaw Valley, where I had a scholarship to the Squaw Valley Community of Writers, which was a great help to me. I have taught workshops there from time to time, and always feel a bond of gratitude. It’s a wonderful summer writing program.

Like most writers (and readers, I suspect) I’ve always been drawn to fiction exploring life’s challenges rather than the easy parts. And I’ve tended to write about people unlike myself. So I’ve written about single women and single men (I’ve been married forever to my college sweetheart), and people who realize too late that they have missed out on opportunities, like Liza in “Once in a Blue Moon,” who misses the life she had on the road with a blues musician, or Sally, who missed her chance to have a child when she was younger, and can’t quite to commit to the man she’s involved with at 35 (she calls him “the almost-perfect man”). Beth, in “Totems,” who can’t find anyone to allow her to grieve for the child she miscarried.  Joshua, in “Payback Time,” gives up everything to work 24/7 in Silicon Valley. He wakes up one morning and smells the espresso: “What he wanted most now was time—late mornings in bed, Peet’s coffee, sunshine on someone’s hair. It was time to cash out. He was thirty. Quarter by quarter, the valley had burned him out. Now it was just a matter of time before the big payoff.” But he doesn’t expect to be foiled by corporate malevolence. Such an innocent!

Looking back at the book, can you pinpoint what's changed in your writing?

I no longer have a tendency to make explicit literary references. Upon rereading, I noticed references in the stories to The Waves, The Great Gatsby, On the Road, Absalom, Absalom, The Cherry Orchard and other books I revered.

If you were to write the book now, would the stories be different, do you think? Probably! But I’m not sure how. I’m focused on the work I’m doing now. I’ve finished a second collection, and am near the end of a novel.

What I loved about the stories, besides the fierce, honest voice, were the glints of hope. Can you talk a bit about that, please?

I’m an optimist, always expecting things will turn out. I wake up curious and eager to start the day, and I have lots of energy. Oddly, this seems to make me hopeful. Try this, try that, something will work out.

I’ve been working on a novel for a number of years, struggling to get it right, with multiple revisions. I can’t let it go, because I believe in the material. It’s about a woman who marries a high school sweetheart, who leaves her when their son is not yet two years old. She moves in with his parents and raises the child with their help. She is descended from abolitionist founders of the small town in Illinois where they live. He’s descended from one of the slaves who was freed through their work in the underground railroad. The present-day story is set in 2004, during the Obama-Keyes senatorial campaign. Her son, who has just been sent to prison for the third time for running a successful drug business, calls her from jail to ask for help. His girlfriend is pregnant. With twins. That phone call blows apart her life. I’m learning how to integrate a lot of historical research into a contemporary narrative without losing the thread. Novel writing is so humbling. I sometimes feel I am pushing the limits of my optimism. But I feel good right now about the shape of the current revision. Ask me again in three months!

How does it feel to have Stealing the Fire back in e-book form? Like a painless rebirth. I wasn’t tense about reviews (I already had the prepub reviews, which were so positive I have been sustained for years of writing a second collection and the novel).

Also Dzanc Books created a new cover, which I love, and Meg Pokrass, flash fiction writer and BLIP senior editor, created a book trailer. Imagine that! I love the look of the book on my iPad. I’m still working on how to SIGN an e-book. I’ve had suggestions. Everyone has been so generous and helpful, including you. I appreciate your finding a place for me on your blog.  Also, because I spend so much of my time as a book critic, it’s good to be back in the author’s seat. And I'm energized to complete The Journey to Eastville, the novel.