Corey Mesler talks about Burke's Book Store, being a middle-of-the-night writer, meeting his wife and co-owner Cheryl, and writers who should be well known but are not...yet 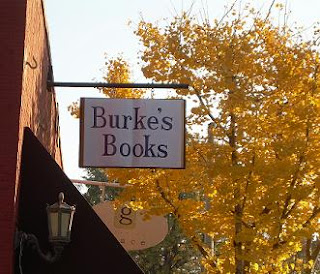 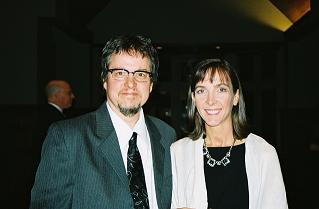 I'm thrilled to showcase the fabulous Burke's Books today. I can't thank Corey enough for giving such a hilarious interview (hey, he's been, in his own words, "a  pirate, a pauper, a puppet, a poet, a pawn and a king.") What more could you ask for?

Burke's Book Store has been around for a long time--in fact you're one of the oldest stores in the country. Every bookstore seems to have a unique flavor. How would you categorize the flavor of Burke's and how do you see the store changing?

Burke’s has been hanging around since 1875. I have only been with the firm since 1900. We have shape-shifted a few times, always looking for something to keep us afloat during difficult times for bookstores. But our core has always been a great selection of used and rare books. We are blessed to have shrewd buyers working with us and the number of genuinely groovy books that walk in our front door is, at times, astonishing. The smartest thing we did was move the store to the neighborhood where we also live, Cooper Young, in the heart of Midtown Memphis. There is life here! There are pedestrians! The neighborhood was just named by the American Planners Association one of the top ten neighborhoods in the whole country. So, we are proud to be a part of a vibrant community.

I love the fact that you met your wife Cheryl in the bookstore. Care to tell that story?

Ha. It is a good story. In movie terms it is called “meeting cute.” The qualifying factors were these: I was working in the bookstore, she came in.  I had just separated from my first wife and was, in part, damaged goods, unsure of myself, sad at the hopelessness I thought lay at the core of this tired old world, still torn inside from living part time apart from my toddler son, Toby, whom I loved with a love as fierce as the fires of perdition.  Still, like those reprehensible red-coated hunters, I knew and could recognize a fox when I saw one.  Cheryl was a fox.  She was long-legged and dark and her resemblance to Diane Keaton did not hurt my interest in her, Diane Keaton holding one of those places in my pantheon reserved for goddesses or geniuses.  And, when she approached the counter to purchase her books, I made sure I was the clerk who greeted her.

And, there in her stack of books, lying as innocently as a pit viper or incendiary device, was a copy of the poems of Leonard Cohen.  Let me pause here to explain something.  There is a line which runs straight from the wellsprings of creation through a series of songwriters and it goes roughly like this: from Hoagy Carmichael to Bob Dylan to Leonard Cohen to Elvis Costello.  Leonard Cohen, like Dylan, is personal to me.  He is mine the way my sense of humor is.  He is part of the outside world that helps to define me.  And, here was this beautiful woman (when she was closer I saw that her hair was the color of dark chocolate and I thought if I could run my hands through it I could die happy) buying some of Cohen’s supernal poetry.

There was only one thing to do.  I looked from the book to her radiant face, back to the book, back to her face, back to the book.  I picked up the book.  Words formed in my reptilian brain.  And I spoke:  “Leonard Cohen.  Would you marry me?”  She laughed.  Thank God, she laughed.  I laughed, too, as if I had made a joke but I had not.   I determined then and there that I had to know this woman.  It was as important as knowing that Rob and Laura Petrie lived on Bonny Meadow Lane in New Rochelle.  It was as important as Dylan and Leonard Cohen and Elvis Costello. And here, 22 years later, we are.

You’re also a writer—what’s your day like and when do you find time to write? And please tell us something about the Secret Agent Man TV show you were on!

When I was a pup I was a middle of the night writer and reader. Insomnia was my tool, my cater-cousin, my demon-lover. I wrote a lot of sad bastard poetry. With age I have become a morning writer (and a writer of prose). Annie Lamott says that if you set your booty (well, the word booty is mine) in your chair at your desk the same time every morning your body will prepare itself to write. I have found this to be true. I go to bed early and wake early and write between 6 and 11. With age has come discipline. My younger self can only look at my older self and admire.

I would tell you about Secret Agent Man but then I would have to kill you.

What three books are obsessing you now?

Good question. A question I love answering. Take a group of smart people and say, “What are you reading?” and what follows is better than heroin.

Three reads in 2012 that knocked my socks off:   James Salter’s Light Years; Hans Fallada’s Every Man Dies Alone; and Ken Kesey’s Sometimes a Great Notion, which, I am convinced is that mythical creature must sought after: The Great American Novel.

What question should I have asked that I didn't?

Um, how about writers who should be well-known but, for some cockeyed reason are not? I have a lengthy list but I would say these first: Memphis’ own Steve Stern, Memphis’ own Cary Holladay, Peter DeVries (inexplicably completely out of print), Patrick McGinley (an Irishman, again inexplicably completely out of print), David Markson, Todd McEwen, Jean Stafford, Alexander Theroux, Miles Gibson, and Iris Murdoch. Ok, everyone knows Iris Murdoch, but she is my favorite writer and I just wanted to say her name out loud.
Posted by Caroline at 9:15 AM

This is really worth reading, it has too much details in it and yet it is so simple to understand
Accredited High School Diploma Online

buy rare books online because some people thought that its not good, but I don't think so because If we don't have enough time to go to the shop an buy that book so we can buy that book online, so really thankful to you posting this blog.

.. He is mine the way my sense of humor is. He is part of the outside world that helps to define me. And, here was this beautiful woman (when she was closer I saw that her hair was the color of dark chocolate and I thought if I could run my hands through it I could die happy) buying some of Cohen’s supernal poetry.Great stuff!

I loved as much as you will receive carried out right
here. The sketch is tasteful, your authored subject matter stylish.

nonetheless, you command get got an nervousness over that you wish be delivering the following.
unwell unquestionably come more formerly again since exactly the same nearly a lot often inside
case you shield this increase.

Feel free to visit my homepage - read what she said