Peter Golden talks about Comeback Love, the past, the present and more 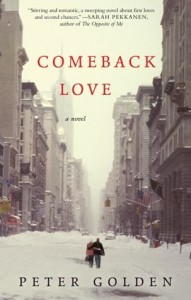 Peter Golden's Comeback Love is a gorgeous novel about first love and second chances, and I am honored to have him here on my blog writing about how the past and the present exist together. Thank you so much, Peter.

Snow is falling past the glow of the gas lamps along the street, and the silvery flakes seem to fall straight through this winter evening into evenings gone by, when I watched the snow falling softly past my bedroom window and harbored no grander wish than that in the morning school would be closed.

Now, a half-century later, I wonder why I frequently find myself slipping backward through Time. Sure, I’ve been earning a living at it for a while—writing biography, history, and my just published novel, Comeback Love—but my wanderings are not limited to the hours I spend at my desk and often come over me as suddenly as a fever.

I have no explanation for it, but like any self-respecting novelist I do have a story.

A Saturday morning in October. The Lone Ranger is on TV. I’m seven years old, wearing a white cowboy hat, black mask, and a holster with two white-handled six shooters like you-know-who. When the program is over, I go into the back yard. Around the neighborhood I hear metal rakes scraping against sidewalks while blue smoke, fragrant with burning leaves, drifts over the houses. My father went to the store for cigarettes, and when he comes home I’m going to be put to work. For some reason, this is the day that I decide a curtain separates the present from the past, a purple velvet curtain like the one on the stage at my elementary school. The wind picks up, the curtain moves aside, and convinced that it would more fun back there than raking leaves, I step behind it and find myself on the other side of Time.

My father did come home, but never asked me to rake. Maybe he couldn’t see me. He was a practical man and tended to live in the present.

For the last fifty years, I have moved from one side of this curtain to the other like a hyperactive stagehand. When I was writing Comeback Love, I was walking along Broadway toward 114th Street and passed Havana Central restaurant, but it was a an Indian-summer evening in 1969 and the restaurant was the West End Bar filled with rowdy jocks swilling beer, intellectuals eating hamburgers, and revolutionaries munching potato chips, On another day, I was in Washington Square Park, spiffed up now to match the grand town houses along its leafy borders, and yet for me the park was crowded with hippies, hoods, burnouts, bums, druggies, and students gathered around the high, silvery mist of the fountain.

And here I go again with a new novel—working title, The Winter of Julian  Rose—beginning in 1938 and ending in 1966, moving from Hitler’s Berlin to Miami Beach, Greenwich Village to Paris, South Orange, New Jersey, to Lake Nisswa, Minnesota.

Sitting at the center of the novel is Kendall Ann Wakefield, a beautiful, African-American woman, a photographer whom I met at Le Café Tournon in Paris. The war has been over for a couple of years, and when I walked into the Tournon, I saw Kenni-Ann in the corner of the café, playing pinball with the novelist, Richard Wright. Later, in the Jardin du Luxembourg, as I strolled by the bright rows of flowers, Kenni-Ann was photographing the Parisians reading newspapers and books on the long line of chairs.

And so I hang on while I am, in Fitzgerald’s words, “borne back ceaselessly into the past.”
I can’t say that I understand it, but I would have it no other way.
Posted by Caroline at 10:02 AM