Dawn Skorczewski talks about Anne Sexton's therapy tapes, psychotherapy yesterday and today, and so much more 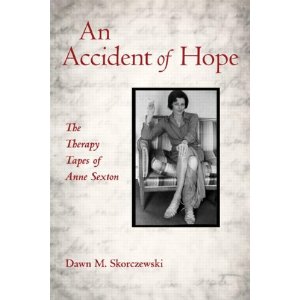 I have always loved Anne Sexton. She suffered from mental illness, but her therapist , Dr. Martin Orne, encouraged her to take up poetry--and a career was born. Her poetry blazes on the page. She hides nothing, she confesses everything. How could you not be fascinated by her?


When An Accident of Hope: The Therapy Tapes of Anne Sexton bumped through my mail slot, I practically devoured the book. To say that Dawn Skorczewski has done something remarkable is putting it mildly, and I couldn't wait to speak with her.


What first drew you to Anne Sexton?


I was first interested in Anne Sexton because I was certain, from reading her poems, that she was an incest survivor. My mother's own history dovetailed with hers, and so my first journey to Sexton was to find my own history and to connect with my mother's story (which she remained silent about). I found Diane Middlebrook's assessment of this issue in the biography unconvincing. Later, having discovered the value of psychotherapy, I began to listen to her therapy tapes. Then I learned that there was much more to this poet than I'd even imagined.

Sexton was treated by a very particular type of psychotherapy. Do you think that if she had been treated today, with more modern forms of psychotherapy and medication available, that the outcome for her might have been different?


Yes, I do think that Sexton might have had a very different story had she been in treatment today. We need only look at Linda Sexton's recent memoir to see how bipolar disorder and suicidality are being treated today. Linda writes a moving story of attempting to repeat her mother's suicidal example only to find herself alive, and, most surprisingly, choosing life, with the help of an excellent therapist who values the relationship more than the symptom.

How do you think, given this book, that Sexton might be reappraised?


Sexton's poetry looks very different when seen from the vantage point of her therapy. The multiple voices in her poems resonate with awareness of the ways in which person, culture, neurosis and the creative imagination exist in dialogue with each other.


What were some of the difficulties and surprise for you in writing this book?
Oh so hard to listen to hours of Sexton struggling with her depression, her much too conventional husband and in laws, her narcissistic parents, and her ongoing need to feel special to everyone. Add to this her often tone-deaf psychiatrist and it is a long long journey from therapy tape to book. Finally, consider the boundary-violating Frederick Duhl, the psychoanalyst who treated Sexton after Orne. The tapes on which she speculates about his problems withhat she calls "limits" are so sad and so smart. Heartbreaking.

I am now working on the boundary violations issue. I am not sure if folks are aware of how often this happens to this day. Like Orne, I am convinced that Sexton's suicide was heavily influenced by Duhl's abandonment--after he'd convinced her to divorce her husband. Her poem "For My Lover Returning to His Wife" directly represents the complexities of the patient-as-lover position. Traumatic and dramatic as it sounds in a poem, when heard on an audiotape the boundary violation becomes almost unbearable.

What question didn't I ask that I should have?
You ask great questions. Perhaps you are wondering where to buy the most fantastic jewelry in Istanbul? Or where to eat meze in an alley in Beyoglu?

Anne Sexton was the first poet I really loved, long before I could even begin to understand what her poems were about.

Psychotherapy is the treatment, by psychological means, of problems of an emotional nature in which a trained person deliberately establishes a professional relationship with the patient with the object of (1) removing, modifying, or retarding existing symptoms, (2) mediating disturbed patterns of behavior, and (3) promoting positive personality growth and development.

It was really an informative blog.
Batman cosplay