Stephen McCauley talks about his new novel Insignificant Others 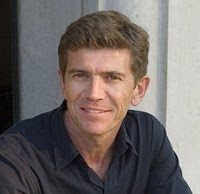 I first met Stephen McCauley at a bookclub meeting at someone's house. I already loved his books and I soon came to adore him because no one is really more hilarious. I even wrote up a piece on him and the how-tos of cooking an urban-styled macaroni and cheese for The Boston Globe food section, complete with a photograph of Stephen and the dish!

Insignificant Others is already racking up the raves. A social satire about the lies we tell each other--and ourselves--it's quintessential McCauley.

And Stephen will be reading from Insignificant Others at NYC's Upper West Side Barnes and Noble, 82 and Broadway, Thursday, June 10 at 7. Be there or be square.

Insignificant Others is set between the real estate boom and the economic mess we’re in now. How much (and why) do you think the economy guides our heartstrings?

I'm not sure the economy does guide our heartstrings. What I find interesting, though, is that it guides our rationale for questionable behavior, often related to heartstrings. To me, that's where the comedy and the social satire start to catch fire--in the self-deception and the lies we tell ourselves.

The title refers to the people and pursuits we cast as bit players or subplots in our lives. Secondary, minor, insignificant. What the narrator discovers over the course of the book is that some of these people and things are more central than he realized. To answer the question, I think we all rely more heavily on the minor characters in our lives than we realize. Without them, the center collapses, and certain primary relationships become untenable.

Do you think that infidelity, like too much exercise, can be a way of keeping us from truer selves? And how can we ever really know what our true selves are?

Interesting you link the two things--exercise and infidelity. Of course they often go together, If one's spouse suddenly starts an exercise regimen, there's reason to worry. According to my observations, people have affairs to get outside of the confines of their lives and what they'd talked themselves into believing is their true self. Sometimes people find what they really want. I don't know if that means losing your true self, but it usually amounts to losing a lot of money.

You’ve got a somewhat hilarious background (ice cream stands, house cleaning service, travel agent) then headed for an MFA. I loved what you said about how you were first told to approach plot (“Not so complicated. Look at A Farewell to Arms. Boy meets girl, girl gets pregnant, boy walks home in the rain. The end.") As one who finds plot so complex that her head sometimes feels as if it is about to explode, I’m wondering if you can talk about your process in plotting and writing this novel.

Unfortunately, I don't ever start with a plot. I have some characters and a situation in mind. I try to begin at the point at which something or someone intrudes to upset the balance in a character's life. The plot (if you could call it that) is about how that gets resolved and some sort of balance is restored. I tend to shy away from big events--deaths, accidents, cancer, murder. I'm more drawn to the small--seemingly insignificant--things that throw our expectations and assumptions into disarray.

You’ve also said your next novel, tentatively titled My Pornographer is not comic, and I’m wondering what that feels like for you, but I’m also really curious why someone with such terrific name recognition would also be planning to write a series of novels under a pen name?
Well, I don't know if I'll ever finish the book I'm working on now and already, early on, something happened that tips it more toward comedy. But I've written six novels in which observations and proclamation (hopefully amusing ones) about life and behavior are every bit as important as plot. More so, perhaps. It gets exhausting noticing things all the time and trying to mine it for comedy, and my idea was to take a bit of a break from that.

The pen name project came to me as an opportunity. The books are commercial in nature and the publisher wanted a whole package they could introduce in a fresh way. I had to audition for the job. When I got it, I figured I'd never be able to do it, but I finished the first book in six weeks, and I have a lot of faith in it. It's coming out next winter. I think the reason I was able to write so quickly and have so much fun with it was because I wasn't writing as "me." It was incredibly freeing.

So, what’s with the Liza Minnelli and bad movie fascination? (asks the interview who has her own Minnelli fascination and who will admit to a love for C quality movies herself.)

I hope this doesn't turn you against me, Caroline, but my interest in Liza is starting to wane. But I think it was borne of her unbelievable theatricality, in which every sentence and gesture becomes a big pronouncement. Nonstop Acting on a grand scale. And of course, the amazing talent combined with the train wreck component. As for bad movies---I guess I just love a movie (The Lonely Lady with Pia Zadora, Showgirls, Glitz with Mariah Carey) in which nothing reads on screen as was intended. There's a huge gap between what was meant and what is, in fact, said, and therein lies a huge pool of comic possibility,

What question should I be mortified I didn’t ask you?
My age. Not that I would have answered.

tramadol online tramadol 100 mg snort - tramadol can get u high

xanax online xanax withdrawal anger - will 2mg of xanax do anything