Women are rewriting their own story! Come see how in Gina Barreca's hilarious collection of flash fiction from some of the fiercest women around: FAST FIERCE WOMEN 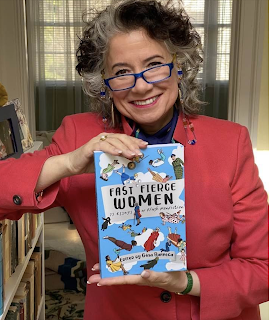 No one writes a funnier bio than Gina herself, So here it is:


Gina Barreca has appeared, often as a repeat guest, on 20/20, The Today Show, CNN, the BBC, NPR and, yes, on Oprah to discuss gender, power, politics, and humor. Her earlier books include the bestselling They Used to Call Me Snow White But I Drifted: Women’s Strategic Use of Humor, It’s Not That I’m Bitter, or How I Learned to Stop Worrying About Visible Panty Lines and Conquered the World, If You Lean In, Will Men Just Look Down Your Blouse, and Babes in Boyland: A Personal History of Coeducation in the Ivy League. Of the other six books she’s written or co-written, several have been translated into to other languages–including Chinese, Spanish, Japanese, Portuguese and German.  Called “smart and funny” by People magazine and “Very, very funny. For a woman,” by Dave Barry, Gina was deemed a “feminist humor maven” by Ms. Magazine. Novelist Wally Lamb said “Barreca’s prose, in equal measures, is hilarious and humane.” Her latest project is a book on loneliness that will be released in 2020!

Gina’s award-winning weekly columns from The Hartford Courant are now distributed internationally by the Tribune Co.; her blog for Psychology Today has well over 6 million views. Gina’s work has appeared in most major publications, including The New York Times, The Independent of London, The Chronicle of Higher Education, Cosmopolitan, and The Harvard Business Review. Board of Trustees Distinguished Professor of English at the University of Connecticut, Gina’s also the winner of UConn’s highest award for excellence in teaching. She’s  delivered keynotes at events organized by national organizations in the U.S. and abroad, including Women In Federal Law Enforcement, Chautauqua, The Smithsonian, the Women in Science, Dentistry, Osteopathy & Medicine, the American Payroll Association, the National Association of Independent Schools, and the National Speaker’s Association, to name a few.

Her B.A. is from Dartmouth College, where she was the first woman to be named Alumni Scholar and the first alumna to have her personal papers requested by the Rauner Special Collections Library at the College. Her M.A. is from NewHall/Murry Edwards College at Cambridge University, where she was a Reynold’s Fellow. Her Ph.D. is from the City University of New York, where she lived close to a very good delicatessen. A member of the Friars’ Club, holder of a number of honorary degrees, and honored by the Connecticut Women’s Hall of Fame, Gina can be found in the Library of Congress or in the make-up aisle of Walgreens. She grew up in Brooklyn and Long Island but now lives with her husband in Storrs, CT. Go figure.

And what I need to add is that Gina is my adored friend. I'd do anything for her. Well, maybe not eat a mayonnaise sandwich, but you know what I mean.

You and I have talked so much about how humor saves us. But so does being fierce!  Can you define what fierce means to you, and we ALL know it does not mean being a bitch, which is a word used to denigrate rather than empower? And can you tell us how the idea for Fast Fierce Women began?
Every time a woman opens her mouth and anything apart from a cooing noise or a compliment comes out, she’s called a “bitch.” I don’t like the word “bitch” and so I don’t use it--and I ask my students not to use it around me, not even as way of congratulating or praising each other. But “tough"? That’s a good word. Tough broads, tough gals, touch chicks (although “chicks" only worked until around 1982) are all seriously great descriptions. They connote resilience, resistance, and a refusal to stick to the code of benign, simpering femininity. Fierce is the BEST word, though, because it conveys an active desire not to settle for less than we’ve always wanted, which is a good time and a fair fight.
I am absolutely loving all the books you do with flash creative NON fiction. I’ve never actually DONE flash fiction before you asked me, too, and I love the punch it really does pack. How did you come to decide on this format?

All great writing holds a mirror up to life and the short form holds up a compact mirror: you see a miniature, an accurate but scaled down weekly columns for than 20 years and, like you, blog for PSYCHOLOGY TODAY. I enjoy the short form; it’s the right cut for my weird shape (and what woman doesn’t think her shape is weird? That’s something for another collection).
Tell us about some of your fave pieces in the collection? And how hard was it to decide what to pick?!

Every essay is about strength, focused power, passion, and determined intelligence, often coupled often with instinct, tenacity, persistence, resilience, rage, and inflexibility. These themes or ideas or stories are often coupled with humor, and deal with friendship, loyalty, talent and community—what’s not to like? Some of the emerging writers in the book, young women who have never seen their words in print before, have written impressive pieces:  “Black People Don’t Do This” by Ashaleigh Carrington, a former student, is both funny and heartbreaking—talking about going to therapy with her middle-aged shrink’s “white noise” going in the background, but her own wish to make her life better determining her commitment to mental stability; Nicole Catarino writes about a battle with OCD and, again, tells her story with ferocity and without self-diminishment—and also with humor. There are stories about flight attendants who finally got the revenge on the jerk passenger we’d all like to get, and stories about first jobs, old sex, and love—so many stories about love, we discover that fierce love is the most enduring kind of love there is. I’m proud of every piece, as different as they are—or maybe because they are so different from one another.

We’ve also talked about how with women, part of the reason we all go to the ladies’ room together, is to talk, to laugh. Even when we go alone, we start up convos with whoever is there, and soon become fast friends.  I have always felt that meeting you was like Friends at First Sight. I just KNEW immediately. And the more we know each other, the stronger our friendship gets. My husband often says that his best friends are women—because they go deeper, they are more honest, more real, and I was wondering why do you think the friendships are different?

Every woman I know believes her own friendships are endowed with a kind of secret significance. I certainly do—my friends keep me alive. Look, I’m not married to my best friend. I’m married to my husband. He’s a man I adore but he’s not my best friend. For that I am fantastically grateful. One of life’s great gifts is that there’s no taboo against having multiple best friends. You don’t have to go on reality television or into family court to explain or defend yourself. Nobody says “What? You’ve had twenty friends in twenty years? That’s terrible. How could you?” And that’s because friends are people you’re supposed to have in your life—the more the better. Nobody says that about spouses.
When we’re with our women friends, we believe that we are in extraordinary company; that’s how I felt about meeting you, Caroline, right from the beginning.  Making us feel rare and prized, our friends capture our imagination and offer us perspective. They remind us not only who we are, but also why we’re significant. Friendships inspire us. They allow us to express ourselves, even when we can’t stand the self we’re expressing or when we’re so far from our true selves that we turn to our friends to bring us back, as if we’d put our personalities in pawn and gave our friends the receipt for safekeeping—as if they were the ones we trusted, more than we trust ourselves.
What’s obsessing you now and why? I wish I had smarter and more wide-ranging answers to this insightful questions. I’m scared by the news, which makes me rock back-and-forth, worrying about whether I should spend money trying to arm Ukrainian soldiers, or install just another generator and hoard more seltzer—I feel useless and ignorant. My greatest fear in life is being useless. I feel at my lowest when I feel as if I am trying my best and getting nowhere. When that feeling comes around, I go all self-torturing. Nothing I have done is enough, nothing I can do will be enough, who I am is absurd—and that’s why the question about friendship is crucial. When I feel this way, I turn to my friends and they help, lending me their own perspective when mine is wobbly.
What question didn’t I ask that I should have?

You asked ALL the good questions. You are kind and generous, and I am lucky to know you. THANKS DOLL!! 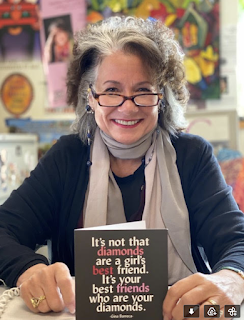