Hundreds of women and girls were brutally killed by Countess Erzsebet Bathory of Hungary between 1585 and 1609, but they were not silenced. Because, in MANY RESTLESS CONCERNS, Gayle Brandeis gives voice to them in their quest for justice. And here, Brandeis also talks about being haunted, writing, life and more. 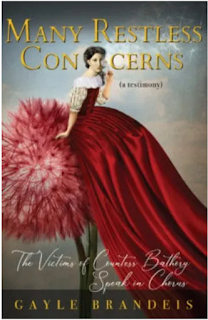 Imagine being a young woman or girl in 1500s and early 1600s Hungary. Now imagine that you were chosen to be tortured and then killed by Countess Erzsébet Báthory of Hungary. Vanished. Disappeared. But author Gayle Brandeis doesn't let them happen. Instead, in her masterwork, MANY RESTLESS CONCERNS, these women speak in chorus, bearing witness, calling for justice.To say this novel-in-poems is extraordinary doesn't begin to do it justice. Here's what others are saying:

"Many Restless Concerns reanimates the stories and bodies of young women who were tortured to death by Hungarian Countess Bathory in the early 1600's. A breathtaking restoration and reckoning. A tour de force chorus built from the voices of women who refuse silence. A body resistance song for all times." Lidia Yuknavitch

"If all the women and girls who have been murdered, tortured, abused and disappeared were to raise their voices, they would create a song that would drown the world...In Gayle Brandeis’ haunting and haunted novel-in-poems, Many Restless Concerns, she invokes such a chorus...Brandeis presents their gifts, their dreams, as well as the ways they died, and demonstrates that it is through collective action that they ultimately find justice. You will never un-hear their mournful, defiant and triumphal song." Terry Wolverton

"Feels like a terrifying and gorgeously lyric fairy tale but never once does the author let us forget that the pain is real and the point is empathy, understanding and protecting the ones who come after. Ethereal and beautiful as its ghostly chorus, but with "muscle and scent," "meat" and "bone," Many Restless Concerns is quickened with the blood of the victims, the essential, and ultimately healing, blood of story." Francesca Lia Block

"This work speaks to our own times, to our #metoo reckoning, to our power as survivors to take back our stories and reclaim the darkness. Oppression of any kind never holds, even if it takes the dead to bring it down. This book is a haunting, essential read for all uneasy souls." Laraine Herring
Many Restless Concerns


I first met Gayle through the now defunct Readerville, and then we met up in person at BEA and there was this instantaneous connection. We've stayed in touch, we see each other when we can, and I consider myself so so lucky to have her as a friend.
She's the author of Fruitflesh: Seeds of Inspiration for Women Who Write (, the novels The Book of Dead Birds, which won Barbara Kingsolver’s Bellwether Prize for Fiction of Social Engagement, Self Storage, Delta Girls,  and her first novel for young readers, My Life with the Lincolns, which won a Silver Nautilus Book Award and was chosen as a state-wide read in Wisconsin. She is also the author of a book of poetry, The Selfless Bliss of the Body (and a memoir, The Art of Misdiagnosis: Surviving My Mother’s Suicide. 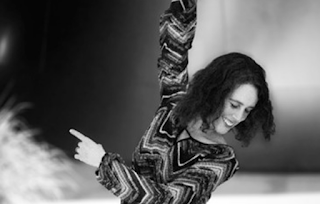 Gayle’s poetry, fiction and essays have appeared in numerous magazines and anthologies (such as The New York Times, The Washington Post, O, The Oprah Magazine, Longreads, Salon, The Rumpus, The Nation, and The Mississippi Review, and many others) and have received several awards, including the QPB/Story Magazine Short Story Award, a Barbara Mandigo Kelley Peace Poetry Award, a grant from the Barbara Deming Memorial Fund, and a Notable Essay in Best American Essays 2016. Her essay on the meaning of liberty was one of three included in the Statue of Liberty’s Centennial time capsule in 1986, when she was 18. In 2004, the Writer Magazine honored Gayle with a Writer Who Makes a Difference Award.

Thank you so much for being here, Gayle! See you soon!

I always believe that writers are somehow haunted into writing their books. What was haunting you?


All my books have definitely arisen from a haunting of one kind or another; in this case, the haunting felt literal. After I learned about Countess Bathory, via one of my daughter’s books about notorious women of history, I couldn’t stop thinking about all the girls and women she had killed (some reports hold her responsible for up to 650 murders), and their ghosts started to whisper to me, started to demand I give them voice.


If I step back to consider a deeper haunting, I was also haunted by questions of how we give voice to trauma. I started writing this when I was pregnant, and my mom’s delusional disorder was ramping up to a new level, and I didn’t know how to handle the chaos of all of that. In some ways, my own voice was trapped at the time, and there was something cathartic about breaking other silences through this project. Then my mom took her own life when the baby was one week old, and the ghosts I had been heeding grew quiet as I worked on breaking my own silences. Once I finished my memoir, I found my way back to these ghosts, and it felt cathartic in a new way, writing about a greater silence, a greater loss than my own.


I was fascinated and horrified and heartbroken to read  the history of Countess Bathory, but more than that I was fascinated at how you are able to move from novels to poetry to short fictions and prize-winning essays and now this magnificent prose, like messages in a bottle, that create a whole heart-rendering whole. Do you find that you have to get into a different sort of mindset to work, or does it just kind of seamlessly happen?


It’s definitely not a seamless process—it’s one that requires a lot of trial and error. Sometimes it takes several drafts before a project tells me what form it wants to take—what I think is a short story may become a novel or an essay; what I think is going to be a novel can become a poem. It’s a matter of trying different approaches, and listening to the work itself until the right form clicks into place (and then of course revising the work so it can best inhabit that form).

“Pain can open a magnificence within your body,” is just one of the astonishing lines here of the young women bearing witness to their own suffering. It does what true art does, giving us another way to experience the world and see it in a different way. Can you talk about this please?


Oh, thank you! I was living in tremendous chronic pain before I had some life-changing surgery a few years ago, and while the pain was mostly exhausting and distracting, sometimes it would swell in an almost orchestral way that made me feel enormous and elemental, like a thunder cloud. I thought perhaps if these young women could experience something similar, it could give them their first taste of their own power.


I was also fascinated by the topography of the book, how words form a kind of artwork on the page.  How did this come about?


This came about from listening to the text, too—because there is so much white space in this project, any word became a visual element on the page, and some of those words begged for a more dynamic placement.


Like many of us, I’m obsessed with the news and the upcoming election, and doing whatever I can to turn the White House and Senate Blue; more specifically, I’m obsessed with animal behavior and the weekend Marilyn Monroe spent in Lake Tahoe, where I live, right before she died. I’m writing about both—I’ve been wanting to write a book called Write Like an Animal ever since my book Fruitflesh: Seeds of Inspiration for Women Who Write, came out in 2002, moving from the plant world to the animal world for creative revelation, and I’m finally doing it, and am loving exploring animal ingenuity and grace and power (both through research and through spending time with my puppy, who I am totally obsessed with.) Marilyn is my latest haunting—I move through the area with a sort of double consciousness, wondering how she would experience and interpret everything around me.
What question didn’t I ask that I should have?


Your questions are wonderful and I don’t feel anything is missing at all. If I have to come up with something, it would be: Why should we care about girls and women murdered over four centuries ago? I’d say that historical accounts of femicide can help us see our own time period more clearly, can help us see and feel the horror of today’s missing and murdered girls and women, especially those in the indigenous community. If we want to make the world safer for girls and women, we have to tell such stories.